Samaria Palace. This reconstruction shows the façade of the bit hilani palace at Samaria. Built by King Omri, this palace served as the residence of the kings of Israel in the Bible. Photo: Courtesy Alec Chapman.

What did the palace of the kings of ancient Israel look like?

In the Bible, King Ahab’s palace is called an “ivory house” (2 Kings 22:39). We know from other Biblical passages that Ahab—and successive kings of the northern kingdom of Israel—ruled from Samaria. Ahab’s father, King Omri, had established Samaria as his capital and built an elaborate palace there in the ninth century B.C.E. In his lifetime, King Ahab further adorned the palace with intricately carved ivories.

Archaeology has uncovered some of these ivories, as well as the palace itself. Rupert Chapman—formerly of the British Museum, London—examines the Israelite kings’ palace at Samaria in his article “Samaria—Capital of Israel,” published in the September/October 2017 issue of Biblical Archaeology Review. According to the archaeological remains of this structure and textual clues from the Bible, Chapman identifies the palace as a bit hilani, a kind of palace popular in the northern Levant during the Iron Age.

As the point where three of the world’s major religions converge, Israel’s history is one of the richest and most complex in the world. Sift through the archaeology and history of this ancient land in the free eBook Israel: An Archaeological Journey, and get a view of these significant Biblical sites through an archaeologist’s lens. 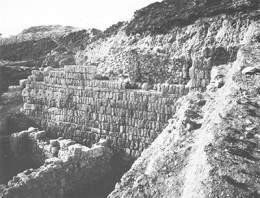 Palatial Wall. Here is one of the excavated walls of the Samaria palace, where the kings of Israel reigned. In the Bible, we have a description of this palace as an “ivory house” (2 Kings 22:39). Photo: From Nahman Avigad, “Samaria (City),” in Ephraim Stern, ed., The New Encyclopedia of Archaeological Excavations in the Holy Land (1993).

The word bit means “house,” and the word hilani means “window” (in Hebrew). Thus a bit hilani must feature one or more windows. … What is crystal clear is that the bit hilani was a royal reception suite, a formal setting in which a king could receive visitors and also show himself to the assembled adoring multitudes. In plan, it is now clear that a bit hilani consisted of a building that sat on a raised podium, which was approached by a wide flight of steps, a pillared portico and sometimes flanked by a guardroom. At the back of the portico was a monumental doorway, opening into an anteroom, which, in turn, led by another monumental doorway into a transverse room, broad and high, with the dais and throne at one end.

Since a bit hilani must contain a window (or windows) for its name to make sense, some scholars have proposed that the window(s) in question were clerestory windows (windows near the ceiling).

However, Chapman has another interpretation. He believes that the bit hilani’s window referred to a “Window of Appearances” above the palace’s entrance. From this window, kings and queens would show themselves to the people standing below. This is akin to what the royal family still does from Buckingham Palace’s balcony. 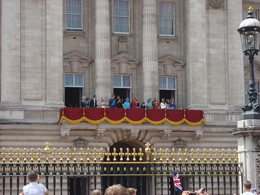 Buckingham Palace’s Balcony. The balcony of Buckingham Palace may serve as a modern parallel for the “Window of Appearances” of the Israelite kings’ palace in Samaria. Photo: Panhard/CC-by-SA-3.0.

If Chapman’s interpretation is correct, then the Israelite kings’ palace at Samaria is the best example of a bit hilani in the southern Levant. Indeed it may be the only one.

This identification may also shed light on Queen Jezebel’s death as recounted in 2 Kings 9:30–37. When Jezebel (who, at this point, is the widow of King Ahab) hears that Jehu, who had usurped the throne, is approaching the palace at Jezreel, she “painted her eyes, and adorned her head, and looked out of the window” (2 Kings 9:30). At Jehu’s command, Jezebel is thrown from this “window” and killed. We can envision this scene as possibly taking place at a similar “Window of Appearances.”

Learn more about the archaeology of Samaria and the palace of the Israelite kings in Rupert Chapman’s article “Samaria—Capital of Israel” in the September/October 2017 issue of Biblical Archaeology Review.

This Bible History Daily feature was originally published on August 28, 2017.