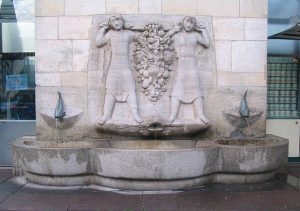 Dogs in the Bible were not well loved. To be called a dog was to be associated with evil and low status. Therefore it is surprising that Caleb, one of the great Hebrew spies, means “dog” in Hebrew. Pictured is a stone relief created in 1958 by sculptor Ferdinand Heseding. The relief, which appears on a fountain in Dusseldorf, Germany, depicts the Biblical spies Joshua and Caleb carrying a cluster of grapes back from the Promised Land (Numbers 13:1-33).

Everyone loves dogs—don’t they? Dogs—or celeb in Hebrew—are humanity’s best friends. We welcome them into our homes, we walk them, feed them, clean up after them and excuse their bad behavior. But in ancient Israel, people had an entirely different view of dogs.

Of the more than 400 breeds of dogs around today, all came from the same ancestor—ancient wolves. Dogs were first domesticated perhaps as far back as 12,000 years ago. Because dogs are the only animals with the ability to bark, they became useful for hunting and herding. Dogs in the Bible were used for these purposes (Isaiah 56:11; Job 30:1).

There is archaeological evidence, such as figurines, pictures and even collars, that demonstrates that Israel’s neighbors kept dogs as pets, but from the skeletal remains found within the Levant, the domestication of dogs did not happen until the Persian and Hellenistic periods within Israel.

The word for dog in Hebrew is celeb, from which the name Caleb derives. Due to the negative attribution of dogs for the ancient Israelites, it is surprising that one of the great Hebrew spies bears this name. As the Israelites were preparing to enter the land of Canaan, Moses called a chieftain from each tribe to go before them and scout the land. Caleb was the representative of the tribe of Judah. When these spies returned, they reported that the land surpassed expectation but that the people who live there would be mighty foes. The Israelites did not want to go and face the peoples of Canaan, but Caleb stepped forward and urged them to proceed. After more exhortation from Moses, Aaron and Joshua, the people relented. Caleb was rewarded for his faith: Joshua gave him Hebron as an inheritance (Numbers 14:24; Joshua 14:14).

Ellen White, Ph.D. (Hebrew Bible, University of St. Michael’s College), was the senior editor at the Biblical Archaeology Society. She has taught at five universities across the U.S. and Canada and spent research leaves in Germany and Romania. She has also been actively involved in digs at various sites in Israel.

Further reading in the BAS Library:

What Does the Bible Say About Dogs?

Bible Animals: From Hyenas to Hippos

This Bible History Daily feature was originally published on January 26, 2015.