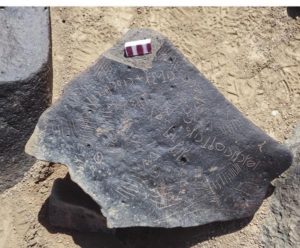 A rock inscription from the Jordanian desert invokes Jesus

Is this ancient rock inscription the earliest evidence of Christianity in Arabia? Photo: Courtesy of the Badia Epigraphic Survey Project.

Before the emergence of Islam in the early seventh century, Arabia was home to a different monotheistic faith. Centuries before Muhammad, some ancient Arabian tribes seem to have adopted Christianity. While the arrival of Christianity in Arabia has been known through literary sources written by outsiders, such as the famous Bible scholar and translator St. Jerome, recent discoveries present evidence of Christianity from pre-Islamic Arabia itself. The vast swaths of desert east of the Jordan River reveal thousands of ancient inscriptions, some of which bear crosses and use Christian terminology. 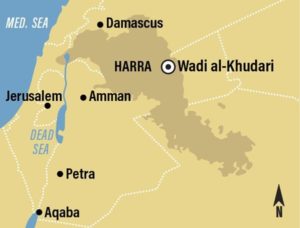 The Harra—the rocky basalt desert found in southern Syria, northeastern Jordan, and northern Saudi Arabia—was for millennia home to pastoral nomads who left behind thousands of rock carvings and inscriptions, some of which attest to the first arrival of Christianity in Arabia.

Writing for the Spring 2022 issue of Biblical Archaeology Review, Ahmad Al-Jallad presents the fascinating results of his 2019 epigraphic mission in the Wadi al-Khudari in northeastern Jordan. His survey yielded hundreds of ancient inscriptions, recorded by the pastoral nomads who roamed these regions nearly two millennia ago. The findspots and distribution of these inscriptions indicate the routes and temporary sites that the Arabian tribes used when hunting wild animals and herding their livestock and camels. Every such inscription is a precious source of historical and cultural information, but one among them is truly remarkable, as it documents the very early penetration of Christianity in Arabia. Likely dating to the fourth century, the inscription invokes Jesus—with the name given for Jesus in the Quran. 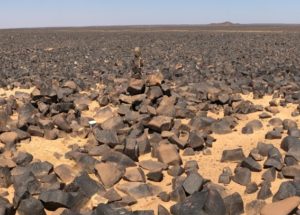 A single cairn in Wadi al-Khudari contained more than 100 ancient inscriptions, including the one invoking Jesus. Photo: Ahmad Al-Jallad.

A professor of Arabic at the Ohio State University and specialist in the languages of pre-Islamic Arabia, Al-Jallad tells the discovery story and provides an in-depth analysis of the unique inscription. He first introduces the Harra, the black basalt desert in northeastern Jordan where the inscription was found. “The tribes that dwelt in this marginal environment left extensive archaeological remains, dating from the Neolithic to modern times. These include burial installations, animal enclosures, and campsites. But perhaps the most remarkable witness to the region’s past is its epigraphic record, including inscriptions and rock art.”

Introducing the inscriptions as a group, commenting on their style, content, and the scripts (or alphabets), Al-Jallad adds, “Writing came to the nomads of North Arabia as early as the beginning of the first millennium B.C.E. By the turn of the Common Era, the nomads of the Harra had mastered the written word. They carved tens of thousands of rock inscriptions in their local vernacular, an early dialect of Arabic, using an indigenous, consonantal alphabet, which modern scholars have called Safaitic.”

Possibly the earliest witness to Christianity in Arabia, the Jesus inscription from the Wadi al-Khudari is a memorial inscription, meaning that it commemorates a deceased person. It consists of three parts: It first gives the inscriber’s name (Wahb-El) and genealogy, then adds a commemoration of his deceased uncle, and finally concludes with a unique religious invocation—to Isay, which corresponds to the name given to Jesus in the Quran: “O Īsay (‘sy), help him against those who deny you.” There can be little doubt that the writer (and possibly also his uncle) was Christian. 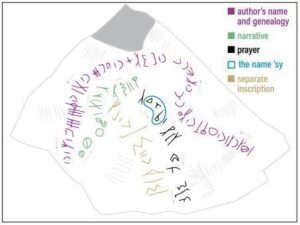 Jesus in the Quran is called Isa, which corresponds to the divine name ‘sy (circled) invoked in this memorial text. Drawing: Courtesy of the Badia Epigraphic Survey Project.

“The present text is a typical Safaitic composition, but the old gods and prayers are replaced by a Christian invocation. Wahb-El may therefore have been a convert who modified the Safaitic writing tradition to accommodate his new faith, invoking Jesus with the same formulaic structure used to invoke the old gods.” Regarding the circumstances surrounding the inscription and the rise of Christianity in Arabia, Al-Jallad theorizes, “[Wahb-El] may have had close contacts with settled areas, such as Bostra in Syria or the cities of the Decapolis in Transjordan, which appear in other Safaitic texts. On the other hand, it is possible that his inscription reflects the efforts of missionaries to convert the nomads.”

To further explore the context and implications of the Jesus inscription as the earliest evidence of Christianity in Arabia, read Ahmad Al-Jallad’s article “Jesus in Arabia: Tracing the Spread of Christianity into the Desert,” published in the Spring 2022 issue of Biblical Archaeology Review.

——————Subscribers: Read the full article “Jesus in Arabia: Tracing the Spread of Christianity into the Desert” by Ahmad Al-Jallad in the Spring 2022 issue of Biblical Archaeology Review.

Jewish Funerary Inscriptions—Most Are in Greek

Commander of the Fortress?