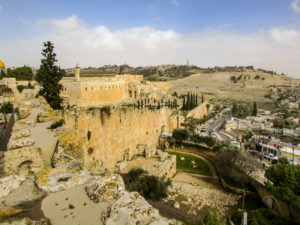 Take a video tour atop the walls of the Old City

Looking out over the walls of Jerusalem. Courtesy Nathan Steinmeyer.

The walls of Jerusalem have shifted many times throughout history and today large sections of the ancient city lie outside the current Ottoman-era fortifications. Despite evidence of permanent settlement dating back to at least the Early Bronze Age (c. 3300–2300 B.C.E.), Jerusalem was not fortified until the Middle Bronze Age (c. 2000–1550 B.C.E.). Since then, the walls of Jerusalem have been destroyed and rebuilt multiple times. Indeed, the walls that surround the Old City of Jerusalem today are only around 500 years old, having been constructed by Sultan Suleiman the Magnificent in the mid-16th century. Just like their builder, however, the modern walls can only be described as magnificent.

Explore this wonder for yourself with this short video tour atop the walls of Jerusalem, led by Biblical Archaeology Review assistant editor Nathan Steinmeyer.

During the Middle Bronze Age, the city of Jerusalem was fortified for the first time, with walls having been found in several areas around the City of David and surrounding the strategically important Gihon Spring. Archaeological and radiocarbon dating suggests to some that this was carried out as early as the 18th century B.C.E. The walls of the Canaanite city appear to have stood for around a thousand years, well into the time of the Israelite monarchy, with possible evidence of later repairs in the Iron Age. However, it is not clear if this wall was in use for that whole period, as the archaeological evidence for Late Bronze Age and early Iron Age Jerusalem remains murky and hotly debated. The late Eilat Mazar also suggested that King Solomon might have added to the defensive fortifications of Jerusalem (as mentioned in 1 Kings 3:1), but this interpretation is, again, debated among scholars. 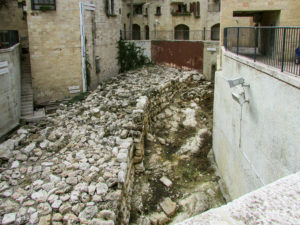 While the ancient city was mostly limited to the City of David, the walls were greatly expanded under King Hezekiah during preparations for the Assyrian invasion (c. 701 B.C.E.). Even today, numerous sections of Hezekiah’s wall remain visible. This wall would remain in use until 586 B.C.E. when it was destroyed by the Babylonians who conquered Jerusalem and took much of the population into exile (2 Kings 25:10).

According to the Book of Nehemiah, the walls of Jerusalem lay in ruins until the fifth century B.C.E., when Nehemiah returned to Jerusalem as the provincial governor and completed the repairs of the walls that had begun under Ezra. 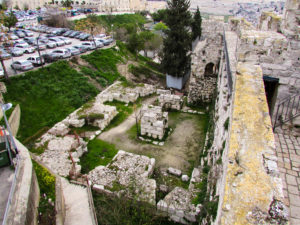 Ancient foundations of the walls of Jerusalem. Courtesy Nathan Steinmeyer.

Under the rule of the Hasmonean dynasty, the city’s walls expanded once again, to form what the Jewish historian Josephus called the First Wall. The walls were expanded again under Herod the Great (r. 37–4 B.C.E.), who carried out lavish building activities throughout Jerusalem and the region, including the construction of the Temple Mount, the site of Herodium, and the port city of Caesarea Maritima. Herod Agrippa (r. 41–44 C.E.) added to the walls of Jerusalem again with the construction of the Third Wall, which was completed shortly before the First Jewish Revolt, during which the walls were almost completely destroyed by the Romans. 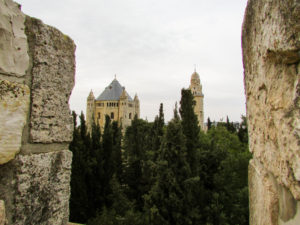 Dormition Abbey, built on the foundations of a fifth-century basilica. Courtesy Nathan Steinmeyer.

Around 130 C.E., the city of Jerusalem was rebuilt by Emperor Hadrian as a Roman settlement and renamed Aelia Capitolina. However, the walls of the city remained in ruins until the end of the third century. A century after the Roman Empire’s conversion to Christianity, the city was renamed Jerusalem and its walls were greatly expanded by Empress Aelia Eudocia. The Byzantine walls mostly followed the lines and foundations of the earlier walls from the Second Temple period.

After Jerusalem fell to the Umayyads in 638 C.E., the city’s Byzantine walls saw major repairs, and large parts of the Tower of David and the walls around the Temple Mount were constructed. These walls were largely destroyed in 1033, however, when a major earthquake struck the city. Upon their reconstruction, much of the southern part of the ancient city, including the City of David, was left outside the new walls. 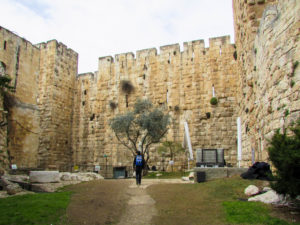 Inside the fosse moat of the Tower of David. Courtesy Nathan Steinmeyer.

Jerusalem’s Walls Since the Ottoman Period 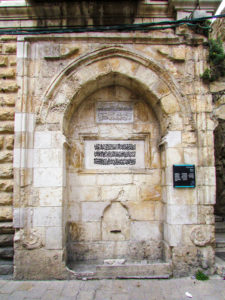 During the reign of Suleiman the Magnificent (r. 1520–1566), the city of Jerusalem regained its splendor and recovered from centuries of neglect. One of Sultan Suleiman’s greatest projects was the restoration of the walls of Jerusalem. These are the same walls that surround Jerusalem today. Many Arabic inscriptions found throughout the Old City record the dates that various gates and sections of the wall were rebuilt. Not every section was completed, however, and many towers were left unfinished. In the 19th century, many building updates were made to the Old City, including the construction of New Gate and the filling in of the moat that surrounds the Tower of David.

The Old City of Jerusalem is currently divided into the Muslim, Christian, Armenian, and Jewish Quarters. It is home to nearly 40,000 people and hosts dozens of Christian, Muslim, and Jewish holy sites. The walls of the Old City encompass an area of roughly 250 acres and extend for more than 2.5 miles. Although the wall’s size varies at different points, on average, it stands 40 feet tall and measures 8 feet thick. Although eight gates can be seen along the walls, only seven are in use today. 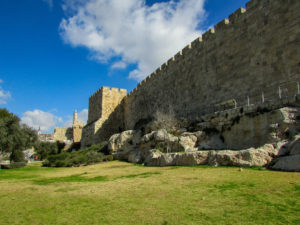 Ready to walk around Jerusalem’s incredible walls yourself? Click here to take a video tour atop Jerusalem’s ancient walls.

Restoring the Walls of Jerusalem

The Jerusalem Wall That Shouldn’t Be There

Jerusalem Down Under: Tunneling Along Herod’s Temple Mount Wall