THE PRESENTATION IN THE TEMPLE. When Joseph (far left) and Mary (left of center) bring baby Jesus to the Jerusalem Temple, they are greeted by Simeon, who embraces the baby, and Anna, the New Testament’s only prophetess, shown at right with a scroll, in this 1342 tempera painting by Ambrogio Lorenzetti. Simeon instantly and independently recognizes Jesus as messiah. Anna begins to preach: “She came, and began to praise God and to speak about the child to all who were looking for the redemption of Jerusalem.” Both are quicker than Mary to comprehend who Jesus is. Uffizi/Scala/Art Resource, NY

Being first to hear doesn’t always mean being first to understand. In Luke’s birth narrative, Mary is the first to be told that Jesus will be the messiah. Luke adds that she “treasures the words” the angel Gabriel speaks to her. But Mary is also puzzled by the divine message; she is “perplexed” when the angel greets her and must “ponder” the meaning of his words (Luke 1:29; see also 2:19). In this, Mary contrasts sharply with Simeon and Anna, two elderly individuals who happen to be in the Temple when Joseph and Mary bring the infant Jesus to Jerusalem for the first time.

According to Luke 2:22–24, “[Joseph and Mary] brought him up to Jerusalem to present him to the Lord (as it is written in the law of the Lord, ‘Every firstborn male shall be designated as holy to the Lord’ [quoting Exodus 13:2, 12]) and they offered a sacrifice according to what is stated in the law of the Lord, ‘a pair of turtledoves or two young pigeons’ [based on Leviticus 12:2–8].”

At the Temple, the family is approached by a man named Simeon, who has been told by the Holy Spirit that he will not die until he has seen the messiah. (The same Spirit told him to go to the Temple that day, too.) Simeon takes Jesus in his arms and praises God: “Master, now you are dismissing your servant in peace, according to your word; for my eyes have seen your salvation, which you have prepared in the presence of all peoples, a light for revelation to the Gentiles, and for glory to your people Israel” (Luke 2:28–32). Having seen the messiah, Simeon is now prepared to die.

In the free ebook Who Was Jesus? Exploring the History of Jesus’ Life, examine fundamental questions about Jesus of Nazareth. Where was he really born—Bethlehem or Nazareth? Did he marry? Is there evidence outside of the Bible that proves he actually walked the earth?

Anna then approaches the Holy Family. She, too, recognizes Jesus as messiah, but she has a very different reaction: “At that moment, she came and began to speak about the child to all who were looking for the redemption of Jerusalem” (Luke 2:38). She is 84 years old, according to Luke, and she does not want to die: She wants to proselytize. Like the disciples who will follow her, she is driven to bear witness to what she has seen. Mary was the first to have the good news announced to her, but Anna is the first woman to understand fully and proclaim the good news.

This is because in addition to being a proselytizer, Anna is a “prophetess” (Luke 2:36). In fact, she is the only woman in the New Testament explicitly described as a “prophetess.” She then stands in the line of figures like the judge, military leader and prophetess Deborah and the Jerusalem prophetess Huldah, who, in the days of King Josiah, was asked to verify that an ancient scroll (a form of Deuteronomy) discovered during Temple renovations was indeed the word of God (2 Kings 22).

Unlike Simeon, Anna is not just visiting the Temple for the day; she is there all the time. According to Luke, Anna “never left the Temple but worshiped there with fasting and prayer night and day” (Luke 2:37). Perhaps she was part of some sort of order of widows (Luke tells us her husband died after only seven years of marriage) who had specific religious functions in the Temple. She may have been able to undertake this role in the Temple because she was no longer in periodic states of ritual impurity caused by menstruation. 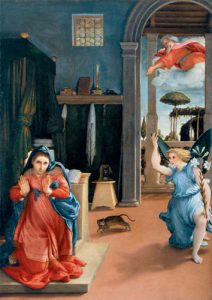 Mary startles when Gabriel and God the Father appear in her home and interrupt her prayers. In Lorenzo Lotto’s unusual rendition of the Annunciation, dated to 1535, Mary’s cat is equally frightened by the divine apparition. According to Luke, Mary treasures the angel’s message, but does not fully understand it. Only after years of “pondering the message in her heart” does she become a true follower of Jesus.” Museo Civico, Recanati, Italy/Scala/Art Resource, NY.

Luke may also have seen Anna as the second witness in or around the Temple needed to validate Jesus’ significance. Deuteronomy 19:15 stresses the importance of having two witnesses to validate an event.

The pairing of Simeon and Anna reflects Luke’s penchant for male-female parallelism when he writes about the recipients of divine blessing and salvation. The story of Jesus’ birth is framed by two such stories—that of Elizabeth and Zechariah in Luke 1 and Anna and Simeon in Luke 2. Interestingly, in both, the woman is portrayed as the more positive example of discipleship. The women are not only more receptive to the message, they are more willing to act upon it, with Elizabeth realizing that her cousin is carrying the messiah and praising God for this blessing and Anna spreading the good news.

Alfred Plummer, in his classic commentary on Luke, suggested that the difference between Anna and Simeon provides a clue to Luke as a salvation historian, a chronicler of the mighty acts of God for his people through the ages. Yes, a messiah has arrived, as Simeon recognizes, but, as the prophetess Anna suggests, a new era, with a new and living voice of prophecy, has at the same time dawned.1 In this new era, the living voice of God will continue to speak about the messianic one. Anna is the first in a line of prophetic disciples who will speak about Jesus to all who were looking for the redemption of Israel.

Not everyone can be a prophet, however. Mary, for example, does not fully understand what Anna immediately recognizes. And she won’t for several years.

Twelve years after the presentation of Jesus in the Temple, the Holy Family returns to Jerusalem and Jesus returns to the Temple, this time by himself. Mary and Joseph search for him frantically for three days. When at last they find him listening to and asking questions of the teachers in the Temple, Mary asks, “Child, why have you treated us like this? Look, your father and I have been searching for you in great anxiety.” Jesus responds, “Did you not know that I must be in my Father’s house?” But, Luke reports, “they did not understand what he said to them … [but] his mother treasured all these things in her heart” (Luke 2:48–51). The late New Testament scholar Raymond Brown wrote: “Luke’s idea is that complete acceptance of the word of God, complete understanding of who Jesus is, and complete discipleship is not yet possible. This will come through the ministry of Jesus and particularly through the cross and resurrection.”

Clearly, Luke is not painting an idealized portrait of Mary or Joseph. Rather, he paints a very human and realistic picture of Mary and Joseph as good parents, anxious, concerned, striving to be obedient and understanding, but not yet comprehending. Brown adds, however, that “Luke does not leave Mary on the negative note of misunderstanding. Rather in 2.51 [“his mother treasured all these things …”] he stresses her retention of what she has not yet understood and … her continuing search to understand.”2

Of course, in the end, Luke portrays Mary as successfully making the spiritual journey into the family of faith; in Acts 1:14, when the apostles gather in the upper room after the resurrection and ascension of Jesus, Mary is with them. But the story of Simeon and Anna suggests Mary had much to learn before she could enter into the Kingdom, and into the spiritual family of faith, which they already belonged to, and which is to be the primary family of Jesus in the eschatological age.

Luke’s Christmas story is full of surprising reversals of fortunes and roles, in which outsiders become more intimate associates than family members, and in which women play a more active role then men. In this way Luke both prepares for and signals one of his major themes in the Gospel of Luke and in Acts—the least, the last and the lost are becoming the most, the first and the found with Jesus’ coming. Luke portrays the rise of a form of Judaism that would rely on the testimony of women as well as men, and that would empower them once again to fulfill roles like Miriam of old.

The first Christmas and the Christ child come at a particular point in time, but for many, like Mary and Joseph, the significance of the event is only understood incrementally and over the course of many years. But the prophetic insight into God’s intentions is a gift which keeps on giving and renewing the people of God. And at the outset of a long chain of such prophetic insights stand Simeon and Anna, one satisfied that prophecy has been fulfilled and the other pointing to the future, a future as bright as the promises of God.

Ben Witherington III is Amos Professor of New Testament for Doctoral Studies at Asbury Theological Seminary and on the doctoral faculty at St. Andrews University in Scotland. A graduate of UNC, Chapel Hill, he went on to receive the M.Div. degree from Gordon-Conwell Theological Seminary and a Ph.D. from the University of Durham in England. He is now considered one of the top evangelical scholars in the world, and is an elected member of the prestigious SNTS, a society dedicated to New Testament studies. Dr. Witherington has presented seminars for churches, colleges and Biblical meetings in the U.S., England, Estonia, Russia, Europe, South Africa, Zimbabwe and Australia. He has written over thirty books, including The Jesus Quest and The Paul Quest, both of which were selected as top Biblical studies works by Christianity Today. In addition to his many interviews on radio networks across the country, Professor Witherington has been featured on the History Channel, NBC, ABC, CBS, CNN, The Discovery Channel, A&E, and the PAX Network.