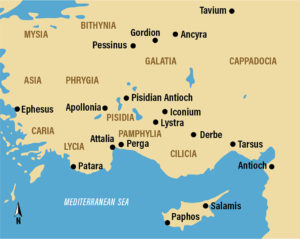 Searching for Galatia’s borders in the first century

Who were the Galatians in the Bible? This map shows the regions of Anatolia during the first century C.E., when Paul would have traveled through the area. Recent archaeological discoveries suggest that the province of Galatia would have included the regions of Pisidia, Phrygia, Lycaonia, and Pamphylia at that time. Map: Biblical Archaeology Society.

Who were the Galatians in the Bible? The apostle Paul addressed one of his now-canonical letters to the “churches of Galatia” (Galatians 1:2), but where exactly were these churches located?

Galatia refers to a region in north central Turkey; Ankara, the capital of modern Turkey, was once a major Galatian city (Ancyra). The name of Galatia is derived from the 20,000 Gauls who settled in the region in 278 B.C.E. More than two centuries later, in 25 B.C.E., the area became a Roman province and was extended to the south. In Paul’s day, the new province included the regions of Pisidia, Phrygia, and Lycaonia. Scholars often refer to these new, southern regions as “south Galatia” and to geographic Galatia as “north Galatia.”

Yet recent archaeological discoveries suggest that Galatia extended even further south during the first century C.E.—meaning that the audience of Paul’s letter might be larger than earlier supposed.

In the Fall 2020 issue of Biblical Archaeology Review, Mark Wilson of the Asia Minor Research Center in Antalya, Turkey, examines the size of Galatia at the time that Paul visited and wrote his letter. As suggested by its title, “Galatia in Text, Geography, and Archaeology,” his article weighs all the available evidence for tracking down this province’s borders to determine the original audience of Paul’s letter to the Galatians. 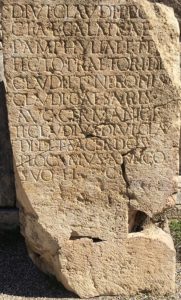 Dated to the late 40s C.E., this Latin inscription from Perga mentions Galatia and Pamphylia as a joint Roman province and names Sextus Afranicus Burrus as its procurator. Photo: Mark Wilson.

The Book of Acts records Paul’s travels through “south Galatia,” including the cities of Pisidian Antioch, Iconium, Lystra, and Derbe (Acts 13–16). Paul also visited Perga and Attalia in the region of Pamphylia on the Mediterranean coast (Acts 13–14). Three recent archaeological discoveries suggest that these cities in Pamphylia were part of Galatia when Paul visited the region:

Further, two Latin inscriptions, excavated from the city of Perga in Pamphylia, name Galatia and Pamphylia as a joint province during the late 40s and early 50s C.E.

These inscriptions show that the province of Galatia stretched from central Anatolia to the Mediterranean Sea during Paul’s day. Wilson concludes that the audience of Galatians would have included cities in Pisidia, Phrygia, Lycaonia, and Pamphylia. Learn more about Galatia in Mark Wilson’s article “Galatia in Text, Geography, and Archaeology,” published in the Fall 2020 issue of Biblical Archaeology Review.

——————Subscribers: Read the full article “Galatia in Text, Geography, and Archaeology” by Mark Wilson in the Fall 2020 issue of Biblical Archaeology Review.

A version of this post first appeared in Bible History Daily in September, 2020

Read more in the Bas Library

On the Road and on the Sea with St. Paul: Traveling conditions in the first century
by Jerome Murphy-O’Connor. In the Acts of the Apostles, we are told that Paul made three missionary journeys. In almost every introduction to the New Testament I have seen, the author discusses St. Paul’s journeys in terms of places and dates; his concern is to establish the location of the cities Paul visited and to fix the exact time he visited them. But when Paul himself speaks of his travels he emphasizes, not the “where” or the “when,” but the “how.”

After the Flood!: The drowning of an ancient Roman city by Jessica A. Meyerson. It was called one of the biggest archaeological finds in years: In late November 1999 Turkish and French archaeologists began excavating the ancient Roman city of Zeugma in southeastern Turkey. Within weeks, they’d unearthed two large villas containing over a dozen exquisite ancient Roman mosaics. Preliminary surveys revealed that hundreds of other villas lay buried just beneath the surface of the surrounding area. It’s a “second Pompeii,” crowed one local Turkish politician.

Paul’s Contradictions: Can they be resolved?
by John G. Gager. Was the apostle to the gentiles incapable of consistent thinking? Some recent Paul scholars have made precisely this claim. The Finnish exegete Heikki Räisänen, for example, has taken what I call a “contradictionist” view of Paul’s letters, insisting that “Paul’s thought on the law is full of…inconsistencies.”