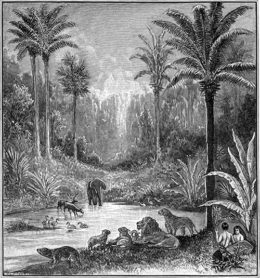 This illustration shows Adam and Eve in the Garden of Eden, where God gave them the command to “be fruitful and multiply” (Genesis 1:28). Photo: From Charles Foster, The Story of the Bible (1897).

While there are many examples of strong and inspiring men and women in Genesis, the book is also packed with stories of dysfunctional families, which is evidenced from the very beginning with the first family—Adam, Eve and their two children, Cain and Abel. In no short amount of time—just 16 verses after announcing the birth of Cain and Abel in Genesis 4—Cain has murdered his younger brother and is consequently exiled from the land. In theory, this would have dropped the world’s population from four down to three. The narrative continues in Genesis 4 with Cain settling in the land of Nod and having children with his wife. Who did Cain marry? Where did she come from? Are there other people outside of Eden? In the November/December 2013 issue of BAR, Mary Joan Winn Leith addresses these questions and explores the identity of the wife of Cain in “Who Did Cain Marry?”

Given that the wife of Cain is only mentioned once in the Old Testament, she would not be counted among the famous women in Genesis. Nevertheless, her identity is still worth investigating. Who did Cain marry? Mary Joan Winn Leith first explores the traditional Jewish and Christian answers that contend that the wife of Cain was another daughter of Adam and Eve. According to this reasoning, Cain would have married his sister—one of Abel’s twin sisters no less, according to the Genesis Rabbah.

Mary Joan Winn Leith explores the identity of the wife of Cain.

A different answer emerges when Leith turns from the traditional responses about the wife of Cain and delves into modern scholarship. Looking at recent work done by sociologists and anthropologists, she notes that when forming a group identity, we tend to define ourselves by how we differ from other groups. In the ancient Near East, sometimes those outside of a particular group or society were considered less “human” by those inside of the group. An important factor that contributes to this mindset is geography. People in the ancient Near East typically stayed close to home, which affected their perception of the world. Surely they knew that other groups of people—potential enemies or allies—existed far away, but if they never came into contact with these groups, what did they matter?

Mary Joan Winn Leith suggests that while the Israelite storyteller knew that other men and women in Genesis existed outside of Eden, they did not matter to him or factor into his account. He was concerned with Adam and Eve and their progeny—not those outside of this group.

Who did Cain marry? There are many answers. For Leith’s explanation of the identity of the wife of Cain—one of the often-overlooked women in Genesis—read her full Biblical Views column “Who Did Cain Marry?”

This Bible History Daily feature was originally published in 2013.

What Happened to Cain in the Bible?

Cain and Abel in the Bible

The Adam and Eve Story: Eve Came From Where?

What Does the Bible Say About Infertility?

The Creation of Woman in the Bible

First Person: Misogyny in the Bible