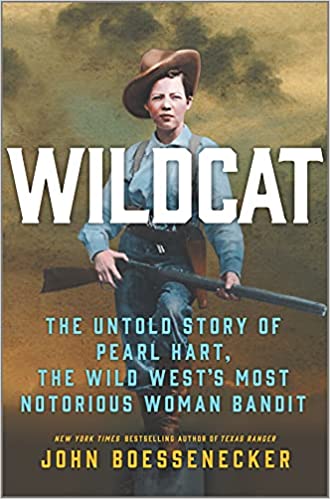 Perhaps no other historical Western figure has been obscured by as much misinformation and myth as Pearl Hart. But as the title of this biography suggests, award-winning author and Wild West special contributor John Boessenecker has uncovered the onetime stagecoach robber’s true story—and it is more fascinating than the legend. One fact the many accounts of Hart’s life do get right is that on May 30, 1899, she and a man who called himself Joe Boot held up a stage
in Arizona Territory, disarmed all aboard and stole their money, bizarrely returning four silver dollars to each of the passengers. “Americans,” writes Boessenecker “were simultaneously shocked and thrilled by the concept of a real woman bandit.” That one crime, he says, made her the most infamous woman in America near the turn of the 20th century.

Hart was a rarity on the Western frontier, a notorious woman who was actually a bandit. As Boessenecker points out, Annie Oakley was a sharpshooter, Calamity Jane a prostitute and camp follower, Belle Starr a consort of outlaws, and Ellen “Cattle Kate” Watson a homesteader hanged for alleged cattle rustling. But Pearl was not the first female stage robber. “In 1874 teenaged Lizzie Keith, with her lover Fred Wilson, held up a stagecoach in the Coast Range sound of Hollister, California,” the author notes. Another myth is that Pearl and her paramour committed the last stage robbery in Arizona; there were five more over the next seven years. While the stage hold-up made her famous, Hart’s story otherwise remains compelling. “Pearl Hart,” Boessenecker writes, “broke all the taboos and then some. She swore, smoked, drank, robbed, rode hard, broke jail and used men with abandon. The Old West never saw another woman like her.” Well, Calamity came close. But thanks to the author’s efforts to reveal Hart’s true backstory and later life story (like Jane, Pearl provided plenty of misinformation to the curious), Pearl Hart can justly claim the title of “Most Interesting Notorious Woman of the Old West.”

For starters, Boessenecker discovered that Hart’s real name was Lillie Naomi Davy. She was born in Lindsay, Canada, on April 19, 1871, the third child of an illiterate, albeit kind, mother, Anna, and a wretch of a father, Albert, who was prone to alcoholism, violence, abuse and neglect. Through their upbringing in grinding poverty with plenty of trauma, Lillie and her many brothers and sisters supported each other, and it continued that way through their mostly long lives while they, for the most part, hid their true identities.

The fourth Davy child, Catherine Amelia (“Katy”), and Lillie were almost inseparable through the years, and Katy would have, as the author details, “a wild career, rivaled only by that of her older sister and best friend.” The sisters were both attractive, both at times dressed in male clothing and rode freight trains, both were involved in burglaries and prostitution, both had relationships with disreputable men, both served prison sentences (Yuma Territorial Prison for Pearl and the Illinois State Penitentiary for Katy), and both were daring and resilient. In her early 20s Katy was a pioneer balloonist and skydiver and twice broke a husband out of jail, in Oklahoma and Texas. She later wrote The Arizona Female Bandit, a play about the misadventures of her favorite sister and a few of her own misdeeds, and later became an actress and author. Yet today Katy Davy is completely forgotten, while Lillie Davy remains known far and wide as Pearl Hart. Boessenecker suggests Katy “would have had far more success as an author had she written a factual autobiography of her incredible life.” We’ll have to settle for this fascinating new look at Pearl and fresh look at Lillie and the rest of the dysfunctional but dynamic Davy family.

The Untold Story of Pearl Hart, the Wild West’s Most Notorious Woman Bandit