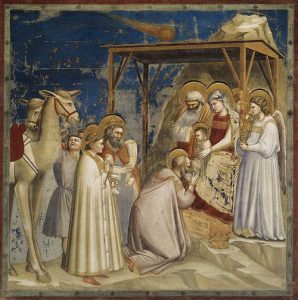 Where Was Jesus Born?

Where was Jesus born? In the Bible, Jesus’ birthplace is identified as Bethlehem. This scene from the Arena (Scrovegni) Chapel in Padua by the Italian artist Giotto shows Mary, Joseph and Jesus in the Bethlehem stable. The three wise men, along with their caravan, and angels gather around the child. Above the stable, Haley’s comet streaks across the sky. Haley’s comet was sighted in 1301, three years before Giotto painted this scene.

When the Christmas season draws near each year, the Nativity story is revisited in churches and households around the world. Passages from Matthew 1–2 and Luke 1–2, the infancy narratives in the Gospels, are read and sung—and even acted out in Christmas pageants.

Where was Jesus born? In the Bible, the answer seems straightforward: Bethlehem. Both Matthew 2 and Luke 2 state that Jesus was born in Bethlehem in Judea.

However, Biblical scholarship has recently called the identification of Bethlehem as Jesus’ birthplace into question: If Jesus was indeed born in Bethlehem, why is he called a Nazorean and a Galilean throughout the New Testament, and why is Bethlehem not mentioned as Jesus’ birthplace outside of the infancy narratives in the Gospels? This has caused some to wonder if Jesus was actually born in Nazareth.

In the November/December 2014 issue of BAR, Philip J. King addresses this question—where was Jesus born—in his Biblical Views column “Jesus’ Birthplace and Jesus’ Home.” He takes a close look at what the Bible says about the towns of Bethlehem, traditionally Jesus’ birthplace, and Nazareth, Jesus’ home.

Interested in learning about the birth of Jesus? Learn more about the history of Christmas and the date of Jesus’ birth in the free eBook The First Christmas: The Story of Jesus’ Birth in History and Tradition.

While Bethlehem in Judea was known in the Hebrew Bible and New Testament as being the birthplace of King David and the birthplace of the future messiah, the small village of Nazareth in Galilee was much lesser-known, not even warranting a mention in the Hebrew Bible, the Talmud or in the writings of Josephus. King explains, “Nazareth derives its importance entirely from its relationship to the life and teaching of Jesus.”

The contrast between Bethlehem, the birthplace of King David, and Nazareth, a small agricultural village, is obvious. Yet both sites were significant in the life of Jesus.

So if Jesus was born in Bethlehem, as the Gospels of Matthew and Luke attest, why was he called a Nazorean? To see what Philip J. King thinks—and for more information about the Biblical towns of Bethlehem and Nazareth—read the full column “Jesus’ Birthplace and Jesus’ Home” in the November/December 2014 issue of BAR.

Interested in learning about the birth of Jesus? Learn more about the history of Christmas and the date of Jesus’ birth in the free eBook The First Christmas: The Story of Jesus’ Birth in History and Tradition.

Did Jesus Exist? Searching for Evidence Beyond the Bible: Lawrence Mykytiuk’s feature article from the January/February 2015 issue of BAR with voluminous endnotes

Who Was Jesus’ Biological Father?

Why Did the Magi Bring Gold, Frankincense and Myrrh?

Has the Childhood Home of Jesus Been Found?

This Bible History Daily feature was originally published on November 17, 2014.