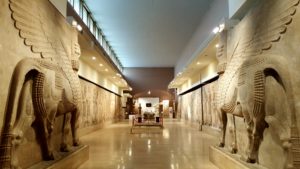 Archaeology on the rise in Iraq after years of war

Looking past two lamassu at the National Museum in Baghdad. MohammadHuzam, CC BY-SA 4.0 , via Wikimedia Commons.

After a nearly 20-year hiatus, archaeology in Iraq is experiencing a rebirth. Following the political instability that resulted from the Iraq War in 2003 and the rise of the Islamic State in the early 2010s, museums are finally reopening and archaeologists are returning to excavate millennia-old dig sites. Among the sites being excavated is the ancient Babylonian city of Larsa. Meanwhile, as Iraq’s National Museum is reopening, other Iraqi museums continue the hard work of restoring, rebuilding, and reclaiming their collections. 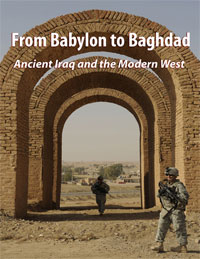 With stability returning to Iraq, international archaeologists and researchers have been slowly returning to the country to work beside local experts. Modern Iraq covers much of ancient Mesopotamia and, as such, is a treasure trove of archaeology. The region boasts cities dating back to the Sumerian period (fifth–third millennia B.C.E.). One particular site that has witnessed the return of international excavation is the ancient Babylonian city of Larsa, which served as the capital of the region until the reign of the famous Hammurabi (r. 1792–1750 B.C.E.). The massive city of Larsa is over 500 acres in size and is now being excavated by an international team of European and Iraqi archaeologists. Already the team has uncovered the magnificent palace of an ancient ruler and dozens of cuneiform tablets written in Akkadian.

Archaeology in Iraq: The National Museum

Archaeology in Iraq is returning to other places as well. On March 7, 2022, the National Museum of Iraq in Baghdad reopened its doors to the public. Many of the museum’s pieces date back thousands of years. This includes the treasures of the Assyrian palace at Kalhu, built by King Assurnasirpal II (r. 883–859 B.C.E.). Although the museum holds over five millennia of history, it is only a small fragment of its previous glory. The museum was famously looted following the U.S. invasion of Iraq, and to date, the Iraqi government has only been able to recover around a third of the 15,000 artifacts previously held by the museum. However, Iraq as a whole is quickly regaining many other stolen items, with 18,000 artifacts returned to Iraq in 2021 alone, many from American collections.

Meanwhile, other parts of the country are still working to reverse years of political instability that led to the loss of countless cultural sites and incredible archaeological artifacts. With the aid of international museums like the Louvre and the Smithsonian, the Mosul Museum is beginning to restore thousands of items that were smashed and broken when the Islamic State took control of the city in 2014. At the time, the Islamic State released videos of their members smashing the larger objects in the museum with hammers while they sold smaller objects through the black market to fund their war efforts. Much of the museum remains in ruins today, but local museum staff and international experts are hard at work fitting the pieces back together, quite literally in some cases, like a giant jigsaw puzzle. Thanks to repatriation efforts, large grants, and assistance from international scholars, the Mosul Museum hopes to reopen in about five years. However, many objects will likely never be restored, being either lost on the black market or destroyed beyond recognition.

Museum of the Bible Founder Announces Return of Artifacts

Firsthand Report: Tracking Down the Looted Treasures of Iraq