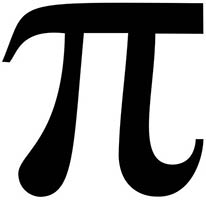 Why did the ancients invent increasingly subtle and ingenious methods to arrive at an exact value of pi? Human curiosity.

How do you find the holy grail of mathematics?

You start with a circle, which is the easiest geometric shape to draw (just fix one end of a string in place and swing the other end around it, inscribing a circle). Then measure the circle’s perimeter (also known as the circumference) and the distance across its widest point (the diameter). Divide the circumference by the diameter—and you have that well-known but eternally daunting number, π, or pi, which has a value of 3.14159265…

That is part of the mystique of pi: Whatever the size of the circle, the value remains the same (what mathematicians call a “constant”). Unfortunately, pi is also “irrational,” meaning that it is impossible to calculate its value completely; the decimals go on forever without regular repetition.

Calculating the value of pi has been a puzzle for millennia. One of the earliest implied values is given in a Biblical passage describing the construction of a huge basin for Solomon’s Temple: “Then [Hiram of Tyre] made the molten sea; it was round, ten cubits from brim to brim, and five cubits high. A line of thirty cubits would encircle it completely” (1 Kings 7:23). In other words, pi = 30÷10 or 3.

The Temple craftsmen obviously obtained these numbers through direct measurement—perhaps using a rope—and they came up with a simple approximation of pi. More than a thousand years earlier, the Sumerians had developed a mathematical method for measuring the dimensions of circles, that of inscribed equilateral polygons (a geometric shape with three or more straight sides). The ancient Sumerians realized that the perimeter of a polygon inscribed in a circle would always be slightly smaller than the circle’s circumference. This allowed them to make a fairly accurate measurement of a curved line, which is almost impossible to do with ordinary measuring devices.

The free eBook Life in the Ancient World guides you through craft centers in ancient Jerusalem, family structure across Israel and articles on ancient practices—from dining to makeup—across the Mediterranean world.

According to a 4,000-year-old cuneiform tablet discovered in 1936, the Sumerians found the ratio of the perimeter of an inscribed hexagon to that of the circle to be 3456/3600, which factors out to 216/225. The Sumerians could thus measure any circle (by measuring an inscribed polygon and making the adjustment). Then they could measure the circle’s diameter—a simple straight line—and divide it into the circumference, producing an approximation of pi. In this way, the Sumerians found pi to be 3 23/216 (3.1065), a much better calculation of pi than the Biblical value. Why wasn’t this known to the Israelites at the time of Solomon? We’ll never know.

In an ancient Egyptian mathematical treatise known as the Rhind Papyrus (c. 1650 B.C.E.), a scribe named Ahmes states that a certain circular field 9 units across (that is, with a diameter of 9) had an area of 64 units. Today, we know the relations between the diameter, circumference and area of a circle: Area equals pi multiplied by the square of the radius (half the diameter), or a = πr2. Changing this equation around, we find that pi equals the area divided by the square of the radius. The field’s radius is 4.5 (half of nine); the square of 4.5 is 20.25; and 64 divided by 20.25 equals 3.16. Therefore, π = 3.16. Thus some modern commentators have given Ahmes credit for a close approximation of pi. But was our ancient Egyptian scribe aware of this formula? Almost certainly not. He didn’t know he was approximating pi, and I should not like to give him credit for it.

Our next significant player is the Greek philosopher Antiphon. In the late fifth century B.C.E., he realized that if successive polygons were inscribed within a circle, doubling the number of sides each time, the difference between the polygon’s perimeter and the circle’s circumference would diminish toward zero (think of a circle as a polygon with an infinite number of sides). While Antiphon didn’t calculate pi using his method (as far as we know), his idea would be the basis of all improvements in the value of pi until the 17th century C.E.

Two centuries later, Archimedes (c. 287–212 B.C.E.) inscribed a hexagon in a circle; then he doubled the sides until he had a 96-sided polygon inscribed in the circle. At the same time, he superscribed a similar series of polygons outside the circle. By this method, he found that pi was greater than 3.14084 and less than 3.14286—an extremely close approximation of the actual value (3.14159265). Archimedes was the first mathematician to bound pi in this way, by calculating its upper and lower limits. Thus he should be credited with making the search for the value of pi a science.

For almost 2,000 years, no one improved on Archimedes’s method of inscribed and superscribed polygons, though refinements were made in the calculation. The second-century C.E. Alexandrian astronomer Ptolemy, for instance, used Archimedes’s method to reach a value of 3.14167. And the method was invented independently by Indian and Chinese mathematicians. In the fifth century C.E., the Chinese mathematician Tsu Chung-Chih and his son Tsu Keng-Chih, using the polygon method, found that pi falls between 3.1415926 and 3.1415927, which is precise enough for most purposes even today.

The calculation of accurate trigonometric tables in the 16th century made the Archimedian approach much easier to pursue than before. The French lawyer and amateur mathematician François Viète (1540–1603) used trigonometry to calculate the perimeter of a polygon with 393,216 sides, pinpointing p somewhere between 3.1415926535 and 3.1415926537.

When it comes to endurance, nothing can beat a computer. In 1949, the primitive ENIAC computer, the first of the “giant brains,” was fed an algorithm for calculating pi. Three days later, it arrived at an answer 2,037 digits long. Today programs are available that allow you to calculate a billion digits of pi on your Pentium computer over the weekend.

What’s the point of computing pi out that far? There is none. If we knew the diameter of the universe, the first 30 digits of pi would theoretically enable us to calculate its circumference to within a millimeter. That’s closer than we would ever need to come; the rest is just showing off.

Kim Jonas, a former college math professor, is currently a statistician for the U.S. Census Bureau.

The free eBook Life in the Ancient World guides you through craft centers in ancient Jerusalem, family structure across Israel and articles on ancient practices—from dining to makeup—across the Mediterranean world.