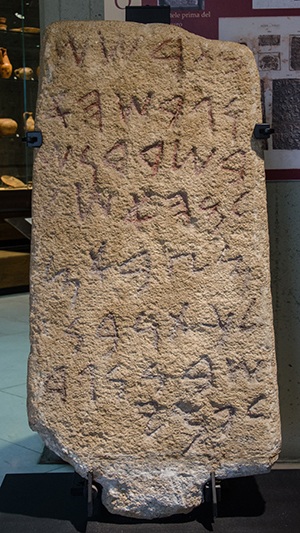 What did the Phoenicians record with their innovative script?

These Phoenicians who came with Cadmus…brought with them to Greece, among many other kinds of learning, the alphabet, which had been unknown before this, I think, to the Greeks.—Herodotus 5.58

Herodotus’s story of the foundation of Greek Thebes by the Tyrian prince Cadmus may be more myth than history, but the detail about the alphabet is true: in fact, the Phoenician script was borrowed by the Greeks and then the Romans, as well as the Israelites.

Our first examples of the Phoenician alphabet—technically an abjad, containing only consonants—appear around the 11th century B.C.E. It was not the first writing system of this kind: 200 years earlier, the people of Ugarit a little further up the Syrian coast used a cuneiform alphabet (including some indication of vowels) to write their local language, and the Phoenician script itself seems to derive from an abjad in use in the Sinai peninsula in the early second millennium B.C.E., which adapted Egyptian hieroglyphic signs.

These new scripts were a real improvement on contemporary syllabic writing systems. The major benefit of alphabets, where letters represent individual sounds rather than syllables, is that they need far fewer signs to reproduce the same words. There are 22 letters in Phoenician, and 24 in ancient Greek, but the Akkadian syllabic script has close to 1,000 signs. This makes it much easier for people to learn alphabetic scripts: they bring reading and writing from the province of specialist scribes into the grasp of anyone lucky enough to get a good basic education.

What did Phoenicians use this new technology to record? The truth is that we don’t really know. We have more that 10,000 inscriptions in Phoenician, from all over the Mediterranean, but almost all are short and formulaic, recording dedications to the gods, the deaths of friends and family members, or occasional brief magical texts. There are exceptions: the cities of Byblos and Sidon, for instance, have yielded some longer royal funerary inscriptions, with occasional details of mighty conquests and magnificent building programs, but mostly given over to curses heaped upon anyone daring to disturb the tomb.

This is a very different picture from that we find in ancient Ugarit, where large archives preserve a much larger set of genres in the local script: accounts, legal documents, letters, epic literature, ritual and religious texts, astrology, divination, magic, and a small number of works on horse medicine. The problem is in part the Phoenician alphabet itself: unlike the cuneiform script of Ugarit, made up of wedges pressed into clay tablets, its linear nature was best suited to writing in ink on papyrus or parchment. Such materials only survive in extremely dry environments, such as the Egyptian desert, and so many Phoenician documents are now lost.

Ancient writers give us tantalizing glimpses of a wider world of Phoenician documentation: the first-century C.E. Jewish historian Josephus tells us, for instance, that Tyre kept archives going back to the time of King Hiram, who helped King Solomon build the temple in Jerusalem, and claimed that they even held letters sent between the kings, as well as records of the city’s history.

Josephus had not, however, consulted these archives directly, and until very recently there were no known texts from Phoenician-language archives in the eastern Mediterranean. At Carthage, excavations carried by the University of Hamburg from 1989–1993 uncovered a building full of document seals, ironically preserved by the fire that destroyed the city, but none of the 5,000 or so papyrus documents to which they must once have been attached had survived.

Now, however, excavations at the inland city of Idalion on Cyprus by Dr. Maria Hadjicosti of the Department of Antiquities have finally brought to light a large archive of Phoenician texts, preserved because they were written not on perishable materials but on fragments of marble, stone, and pottery. These texts are now being studied in Nicosia by Professor Maria Giulia Amadasi Guzzo of the Sapienza University of Rome and Dr. José Ángel Zamora López of the Spanish National Research Agency, who have published their preliminary findings in Italian in the latest issue of the journal Semitica et Classica.

The free eBook Island Jewels: Understanding Ancient Cyprus and Crete takes you on a journey to two stunning, history-laden islands in the Mediterranean. Visit several key historical places on both islands and discover many of the great objects that have been unearthed there by archaeologists.

The new documents were found in a fortified palace complex on Idalion’s western acropolis, and they all date to the fifth and fourth centuries, a period in which Idalion was under the power of the Phoenician-speaking kingdom of Kition to its south. This explains why the vast majority of the texts found, more than 700, are written in Phoenician, though there are also around 30 in Cypro-Syllabic, the main script used on Cyprus in this period. These documents aren’t easy to study: while they may be written on durable materials, they are found in fragments, the ink is often poorly preserved, and the unusual cursive handwriting is hard to read. The texts also preserve a large number of previously unknown letter forms, words, and schematic formulas. Nonetheless, the preliminary work of decoding is now complete.

Unlike the historical archives Josephus reports at Tyre, the material preserved at Idalion is almost all administrative, sets of accounts relating to palace bureaucracy and the organization of agriculture. It sheds dramatic new light on the life, culture, economy, and political relations of Phoenician-speakers on the island of Cyprus. More broadly, these lists of figures, products, and their recipients are slowly building up, for the first time, a picture of the day to day workings of a Phoenician palace economy. There are also intriguing glimpses of personal life: a fragment of a letter, and some texts about religious and social rituals that situate the small world of Idalion in a wider Levantine context, and demonstrate the vitality of cultural links between different areas in the eastern Mediterranean.

One thing missing at Idalion is literary texts. This may seem surprising, given the rich trove of mythical texts found at Ugarit, as well as the contemporary example of the Hebrew Bible and the development in Greece in the same period of the great Homeric epics. Perhaps Phoenician literature will emerge in future excavations and new archives—or, perhaps, as is often assumed, it was all written on perishable materials, and has simply been destroyed by time. But there is no evidence from other sources either that the Phoenicians wrote down their myths and stories. There are plenty of references to technical and scientific works composed in Phoenician—arithmetic, astronomy, and philosophy—but none to literature as we would recognize it until well into the Roman period.

Perhaps Phoenicians never wrote the kind of stories that their neighbors made famous. One striking characteristic of the literature produced by Israelites and Greeks is that it often celebrates their identity as a group larger than a city-state, participating in joint expeditions and events over long distances—from the Israelite exodus from Egypt, to the Greek army attacking Troy, to the verses that celebrate victories at pan-Hellenic competitions. The Phoenicians, living in separate city-states with no common political or cultural identity, may simply have had no need for such tales.

Josephine Quinn is Associate Professor in Ancient History at the University of Oxford. Her research focuses on the ancient Mediterranean world, and her new book In Search of the Phoenicians (Princeton Univ. Press) will be out in December. She co-directs the Tunisian–British excavations at Utica (Tunisia) and the Oxford Centre for Phoenician and Punic Studies.

Who Were the Phoenicians?

Who Really Invented the Alphabet—Illiterate Miners or Educated Sophisticates?

The Oldest Hebrew Script and Language