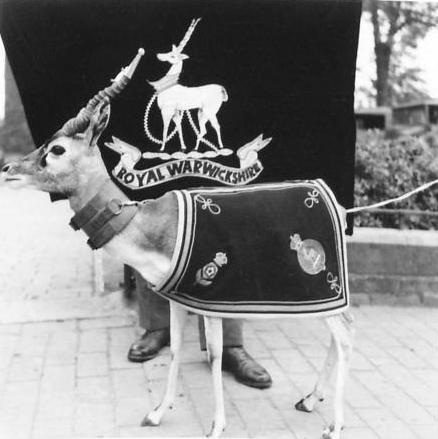 On June 24, 1997, a rather unusual Lance Corporal was awarded the British Army’s Long Service and Good Conduct Medal at a formal ceremony at the Tower of London—his name was Bobby, and he was an Indian blackbuck antelope. He was one of a long line of antelopes, all named Bobby, who enjoyed distinguished careers as mascots representing one of Britain’s oldest infantry regiments for more than 200 years—even if the honored animals were prone to headbutting unsuspecting soldiers once in awhile.

The Royal Warwickshire Regiment, rebadged as the Royal Warwickshire Fusiliers in May 1963 and amalgamated into the Royal Regiment of Fusiliers on St. George’s Day on April 23, 1968, was the sixth oldest infantry regiment in the British Army’s history. The regiment’s origins date back to 1674 when it was formed by Prince William of Orange. It accompanied him to England in 1688 during the Glorious Revolution. The regiment has an illustrious military history and fought during the War of the Spanish Succession, the Peninsula Wars in Spain and France, the Frontier Wars in South Africa, the Indian Mutiny, the War of 1812, the Boer War, and both World Wars. King William IV bestowed the title of “Royal” on the regiment in 1832, and it became known as the Royal Warwickshire Regiment in 1881.

The regimental badge symbol was the antelope. According to lore, this symbol was first adapted from a Moorish banner captured during the Battle of Saragossa, but had also been a symbol of England’s Lancastrian kings and could possibly have been used due to its royal significance.

After the regiment was stationed in India, it began to adopt male blackbuck antelopes as live mascots between 1825 and 1841 and subsequently to receive them as gifts from local maharajas. This tradition lasted for centuries.

The blackbuck antelope, which bears a close resemblance to a gazelle, is native to the plains and light forests of India and Nepal. The species is small and graceful, and the males are known for their dark coats, uniquely striped faces and long spiraling horns. Among the fastest land animals on the Indian subcontinent, the blackbuck antelope has been revered by diverse people of various regions since time immemorial. Its image appears in Mughal-era paintings. The creature also has sacred connotations in Hinduism, and is often depicted as a vehicle of deities including Krishna and the wind god, Vayu. The blackbuck was also used as a heraldic emblem for various princely states of India.

The regiment’s battalion based in India continued to receive antelope mascots as gifts from local rulers, while the home battalion in Great Britain received new four-legged companions from the London Zoo. Some early antelopes in the mascot dynasty were christened “Billy,” and “Charlie,” but the name “Bobby” withstood the test of time.

Every Bobby had a magnificent “uniform” when representing the regiment on formal occasions. This consisted of a specially made coat embroidered with the regimental crest and a collar which allowed two handlers to guide him with two long, bright white leashes. His horns were decorated with removable silver tips for parades. His coat was royal blue, and later was changed to a majestic scarlet after the regiment was amalgamated into the Royal Regiment of Fusiliers in 1968.

The small antelopes proved to be curious and feisty. They often nibbled at anything within reach, plucking buttons off nearby soldiers’ uniforms. They were also known for brandishing their curly horns—sending soldiers leaping to avoid getting poked in sensitive areas. Baby Bobbies required hands-on care and bottle-feeding. Cared for by two handlers, the antelopes were given roomy pens, regularly exercised and dined upon biscuits, horse nuts, crackers and sometimes cigarettes. The last Bobby reportedly enjoyed “football, Nice biscuits and hour-long walks,” according to the BBC.

One particularly famous Bobby was “liberated” from Hamburg zoo by the regiment’s 2nd Battalion at the close of World War II in early 1945. The men built him a large and comfortable new enclosure at their headquarters and took him for walks, attracting the stares of baffled German onlookers.

As the regimental mascot, it was hoped that each Bobby would maintain a dignified demeanor during ceremonial appearances. Yet the impish antelopes did not always feel like being dignified. Once while passing King George V on parade, Bobby had the insolence to sit in the presence of His Majesty and chomp mulishly on grass, bringing the entire procession to a halt. Another antelope infamously butted a Drum Major in the rear end during what ought to have been a solemn military tattoo performance. The unfortunate soldier was left with torn trousers.

The tradition of keeping animal companions is prevalent in the British Army. Many regiments keep animals as official mascots who are cared for at public expense, while others keep regimental pets. Other famous mascots include dogs, ponies, horses and goats.

The last Bobby the Antelope passed away in 2005. Due to the fact that blackbuck antelopes are now an endangered species, the Royal Regiment of Fusiliers is now represented by a British Otterhound named George. However, Bobby still remains a part of the regiment’s life, as the British Army does its utmost to preserve time-honored regimental traditions. The symbol of the antelope crest is still worn today on the buttons of the Fusiliers’ No. 1 and No. 2 dress uniforms.