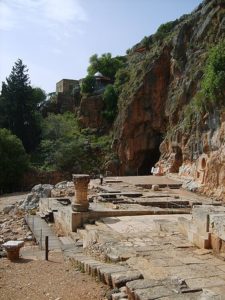 The ruins at Banias include the Cave of Pan and other cultic structures dedicated to Pan, Caesar Augustus, the Nymphs, and Zeus. The lush greenery west of the cliff face may hide another archaeological treasure—King Herod’s palace. Photo: gugganij, CC BY-SA 3.0, via Wikimedia Commons.

King Herod’s palace may have been found at Caesarea Philippi (modern Banias). Though the site was excavated by famed archaeologist Ehud Netzer more than 40 years ago, scholars re-examining archaeological material from Netzer’s dig have now concluded that the so-called opus reticulatum building at Banias must belong to King Herod’s palace.

The site of Banias, at the foot of Mt. Hermon, overlooks the Hula Valley and the headwaters of the Jordan River. Its rugged landscape and lush vegetation offer abundant opportunities to hike and swim. But the site’s ancient ruins are no less impressive. The Paneion—a cave sanctuary dedicated to the Greek god Pan—was established in front of the craggy natural cave along a rock terrace during the Hellenistic period. More construction followed under Rome’s client kings in Judea, starting with Herod the Great, who was awarded the territory by Emperor Augustus. To honor his imperial patron, Herod had a “beautiful temple of white stone” (Josephus Flavius, Antiquities 15.363) built for him near the Paneion. 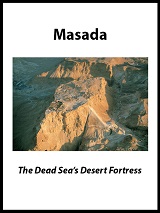 In their article “Proof Positive: How We Used Math to Find Herod’s Palace at Banias,” published in the Spring 2022 issue of Biblical Archaeology Review, Frankie Snyder and Rachel Bar-Nathan aim to reveal a different Herodian edifice. Some 100 yards west of the sacred grotto is a rectangular platform where, according to the authors, King Herod’s palace once stood. In their gritty crime drama, the authors take on the role of detectives, examining clues recovered from “the scene.” A mathematician with a weak spot for geometry and an archaeologist who excavated the site with Netzer, Snyder and Bar-Nathan were able to piece together (literally!) a convincing case for King Herod’s palace at Banias. 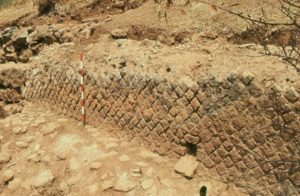 This retention wall, constructed in a distinctive net-like pattern called opus reticulatum, supported a platform on which Herod the Great may have built his palace at Banias. Photo from Ehud Netzer’s Archive.

During two short excavation seasons in the late 1970s, Netzer examined a series of Roman-era concrete walls decorated with opus reticulatum that supported the southern end of the ancient building. Common to Roman architecture around the turn of the era, this net-like brick work is extensively attested only at two other sites in Roman Palestine—Herod the Great’s Third Palace at Jericho and the so-called Herod’s Monument in Jerusalem. This led Netzer to conclude that the opus reticulatum building was built under Herod the Great. Netzer further believed the building was the temple that Herod erected for his imperial patron. 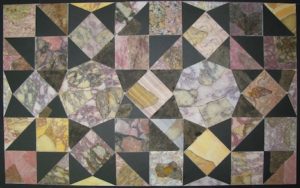 Fancy Floor. The reconstructed decorative floors from Banias have close parallels in other royal projects of Herod the Great, suggesting that the Banias building was King Herod’s palace. Photo: Courtesy Frankie Snyder.

Forty years later, Snyder and Bar-Nathan respectfully disagree. “Scattered about the excavations were approximately 170 small geometrically cut tiles and their fragments that once created an elegantly patterned floor known as opus sectile. Meaning “cut work” in Latin, the floor was patterned with triangular, square, and octagonal shapes,” the authors state, revealing the crucial piece of evidence. The decorative floors, they claim, have parallels in a palace at Jericho built by Herod the Great. Other clues that the opus reticulatum building at Banias is part of King Herod’s palaceare architectural. Arched stairways cut into the mountain to support the building are also characteristic of Herod, who liked to build in dramatic locations (think Masada). Finally, the ground plan is very suggestive of other royal projects of Herod the Great at Jericho.

To personally examine all the evidence in this detective story and to follow the methodical reconstruction of the decorative floors from the opus reticulatum building, read Frankie Snyder and Rachel Bar-Nathan’s article “Proof Positive: How We Used Math to Find Herod’s Palace at Banias,” published in the Spring 2022 issue of Biblical Archaeology Review.

——————Subscribers: Read the full article “Proof Positive: How We Used Math to Find Herod’s Palace at Banias” by Frankie Snyder and Rachel Bar-Nathan, published in the Spring 2022 issue of Biblical Archaeology Review.

Herod the Great and the Herodian Family Tree

In Search of Herod’s Tomb