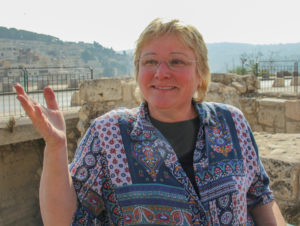 I WAS SURPRISED that Eilat Mazar’s cousin, Amihai Mazar, was not mentioned in her very nice Milestones memorial column (Fall 2021). Was that an oversight or are there professional reasons?

It is true that the Milestones obituary in BAR, by Orit Peleg-Barkat, does not mention Amihai Mazar, but we did mention him in the original, web obituary, written by our own Megan Sauter, which you can read here: https://www.biblicalarchaeology.org/daily/remembering-eilat-mazar/.—Ed. 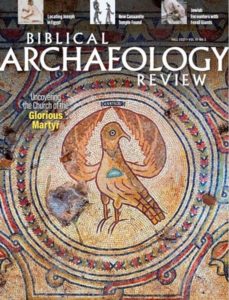 We are asked to set aside “glaring major differences” between the biblical account and the author’s preferred interpretation. Although the Bible carefully preserves a tradition of written historical records, to the author it is the product of “a cultural memory that morphed over several generations of retelling.” Just as unsettling are her repeated claims that “there is no evidence.” I think genuine methodological issues in archaeology are being brushed aside. These include dating, site selection, sample selection, and more.

If archaeology is a science, it is a science of interpretation, not of unique experimental outcomes.

I ENJOYED Rachel Hallote’s “Does Archaeology Confirm Joseph’s Time in Egypt?” but it makes me ask a question I have long wanted to ask: Do any scholars consider Akhenaten when seeking to date when the Israelites left Egypt? Akhenaten was a younger son who became heir to the throne after the death of his elder brother, and he believed strongly in one supreme god.

Would that not be most logically true of someone who witnessed numerous plagues caused by Moses’s one God, who lost his elder brother to the curse of Moses’s God and his father to a miraculous act of that same God? Those would seem strong reasons to reject Egypt’s numerous gods in favor of one that was all-powerful.

RACHEL HALLOTE RESPONDS: An association between Moses as a monotheist and Akhenaten’s henotheism has been proposed more than once, most famously by Sigmund Freud in his book Moses and Monotheism (London: Hogarth Press, 1939). However, scholars have rejected the idea on both historical and philosophical grounds.

AS AN ASTRONOMER, I must correct an error in Steven and Elisha Fine’s article on fossil giants (Classical Corner, Fall 2021). Orion’s Belt is not a constellation but rather an asterism, part of the larger constellation of Orion. While I enjoy reading about archaeology and have visited many sites, I never thought I would be in a position to correct an archaeologist.

MATTHEW THIESSEN’S well-written article “Jesus and Ritual Impurity” (Fall 2021) reminded me of the discussion, in Gospel of Mark 7:1–23, between Jesus and the Pharisees and Scribes. The latter accused him of not walking according to the traditions of the elders, but rather eating with impure hands. Jesus takes this opportunity to accuse them of “invalidating the word of God” with their traditions, which would of course have included ritual bathing. In verse 9, Jesus goes on to call them “experts at setting aside the commandments of God” in order to keep their traditions. Finally, Jesus summed up his view of such traditions by saying, “There is nothing outside the man which can defile him; but the things which proceed out of the man are what defile the man.” Since bathing—other than the baptism of John for the forgiveness of sin—was not a requirement of the law, Jesus would, in my opinion, not have engaged in such traditions.

THE ARTICLE ON RITUAL IMPURITY in Second Temple Judaism struck a chord with me as I had learned that Jesus likely followed these laws a couple of years prior. However, what I noticed (and the article ignores) is a problem with the resurrection. The physically resurrected Jesus would have had contact with a ritually impure tomb, which would have rendered him ritually impure and, for a few days, capable of passing that impurity to other people or objects, including food. Observant Jews would have recognized this and would thus be concerned about becoming ritually impure themselves and/or further spreading the problem. Even if Jesus himself had received confirmation that he was not ritually impure, the disciples and followers would have a major issue to deal with, and since corpse impurity was still an issue in the 40s, it would have caused a major rift between those who accepted it and those new followers of Jesus who did not. This issue seems largely ignored in early church history. 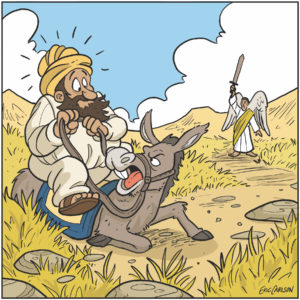 UNTIL YOUR FALL 2021 ISSUE, you had never provided the full biblical quotation when giving the winners of the Caption Contest. One had to either guess it (which I rarely, if ever, managed) or look it up. That was 90 percent of the fun, which you have now taken away. Please bring it back.

YONATAN ADLER ASKED for opinions on how folks about 2,000 years ago could make chalk vessels watertight (Queries & Comments, Fall 2021). I would assume they used a method that ancient wine producers used with their stone vessels. They used to coat the vessels with melted beeswax, thereby making them waterproof. This material is pure, safe, free of contamination, readily available, and sterile.

MODERN CLASSROOM CHALKBOARDS are coated with a resinous material to prevent porosity. Perhaps this material was used in biblical times to prevent the absorption of liquids into the walls of chalk vessels.

I LOVED THE ARTICLE “Purple Threads from the Days of David and Solomon” (Fall 2021) but, as a marine biologist, I noticed that the photo of the three species of marine snails was upside down. But thank you for the article and the terrific work you do.

I have enjoyed BAR for decades and appreciate many of the improvements in recent years. However, the social commentary in the Fall 2021 issue was an unnecessary surprise. The “Who Did It?” quiz (p. 12, answer p. 20), for example, profiles British archaeologist Winifred Lamb and ends with the statement that she “helped pave the way for women to follow in her footsteps.” What woman paved the way for Ms. Lamb? The feminist view that women need women as role models or to “pave the way” is insulting. It assumes women cannot succeed without the help or even the inspiration of other women. It is offensive that to be successful, women need someone to go before and lead the way in any field of endeavor.