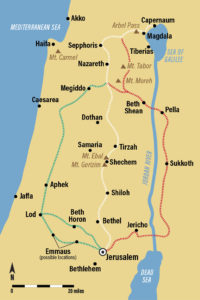 This map shows pilgrimage routes from Galilee to Jerusalem. In the first century C.E., many Jews traveled to the Jerusalem Temple to celebrate the Feast of Unleavened Bread, the Feast of Weeks, and the Feast of Booths.

To celebrate the Feast of Unleavened Bread (Passover), the Feast of Weeks (Shavuot), and the Feast of Booths (Sukkot), many Jews traveled to the Jerusalem Temple during the first century C.E. This was sometimes a long journey. Even for those living in Galilee, it could take up to a week

Jeffrey P. García of Nyack College explores pilgrimage routes connecting Galilee and Jerusalem in his article “Jesus and His Pilgrimage Practices,” published in the Summer 2021 issue of Biblical Archaeology Review. The Gospels record several pilgrimages taken by Jesus and his disciples. Using these accounts, García reconstructs three major routes between Galilee and Judea: an eastern, central, and western path.

(1) The central—and shortest—route goes through Samaria. Pilgrims would have passed the cities of Sepphoris, Nazareth, Tirzah, Shechem, Shiloh, and Bethel. Although this route would have taken only three days by foot, many Jews chose to avoid it. They preferred longer routes that were historically safer. The Jewish historian Josephus records a violent quarrel between some Galilean Jews and Samaritans, while the Galileans were traveling through Samaria (Antiquities). Passing through this volatile region carried real risks. Yet, García observes that sometimes Jesus and his disciples did indeed travel this path (John 4).

(2) Skirting Samaria, the eastern route crosses the Jordan River, passes through the region of Perea, and then crosses back over the Jordan River near Jericho. It would have taken pilgrims five to seven days to traverse it. Cities along this path include Beth Shean, Pella, Sukkoth, and Jericho, as well as smaller villages like Bethpage, and Bethany. Because of the Jewish communities in Perea, this region was safer—and more hospitable—than Samaria for Galilean pilgrims.

(3) The third major route that García outlines is situated closer to the Mediterranean Sea. This western route also avoids Samaria, but this time in favor of the coastal plain. It was the longest way for Galilean pilgrims to reach Jerusalem. Pilgrims going this way would have passed Megiddo, Aphek, Lod, and either Emmaus or Beth Horon.

These pilgrimage paths shed light on social tensions and religious practices in the first century. Sometimes Jews took longer routes to avoid dangerous regions—as they took seriously the biblical command to celebrate the Feast of Unleavened Bread (Passover), the Feast of Weeks (Shavuot), and the Feast of Booths (Sukkot) in Jerusalem (Deuteronomy 16:16). 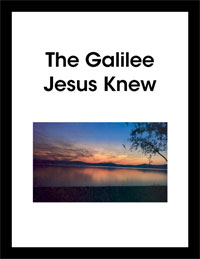 ——————Subscribers: Read the full article “Jesus and His Pilgrimage Practices” by Jeffrey P. García in the Summer 2021 issue of Biblical Archaeology Review.

A version of this post first appeared in Bible History Daily in July, 2021

Read more in the BAS Library:

The compound of the Church of the Holy Sepulchre in Jerusalem is not only Christianity’s holiest site it is also one of the most fascinating buildings in the world. Its nucleus goes back to the 4th century A.D.—how many 4th century buildings are still in existence and in use?—and its various components represent almost every period during the last 16 centuries.

Prize Find: An Incense Shovel from Bethsaida
by Rami Arav & Richard A. Freund

Slowly it emerged from the ground: a beautiful, 8-inch-long bronze incense shovel, the prize find of the 1996 excavations at Bethsaida, near the northeastern shore of the Sea of Galilee. The shovel lay in a first-century C.E. refuse pit. Just a few meters away is the corner of a building.