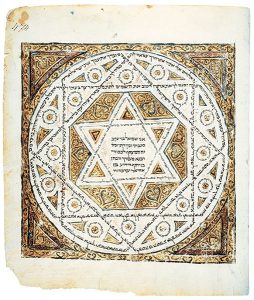 A MASTERPIECE OF THE MASORETES. The Masoretes established an astoundingly accurate tradition of Bible transmission. This carpet page from the Leningrad Codex (1008 C.E.)—of the tradition of the Masoretes—is the base text for Biblia Hebraica Quinta. The scribe of the manuscript Samuel son of Jacob, one of the Masoretes, even records his name. Photo by Bruce and Kenneth Zuckerman, West Semitic Research/With the Ancient Biblical Manuscript Center/Courtesy Russian National Library.

The Hebrew Bible—or Old Testament—that we have today differs from the Hebrew manuscripts of the Bible penned in the first millennium B.C.E. When transmitting any sort of a document from generation to generation, small alterations—some intentional, others not—are made. Even the most careful scribe makes errors, which are perpetuated and often compounded by future scribes. Thus, it should not surprise us that the Hebrew Bible, which has a transmission history of several millennia, contains textual difficulties, corruptions and even mistakes. Critical editions of the Bible examine these differences by looking at varying Hebrew witnesses and try to accurately reconstruct the original Hebrew manuscripts of the Bible. In the November/December 2013 issue of Biblical Archaeology Review, David Marcus and James A. Sanders discuss why critical editions of the Bible are necessary and describe the work that goes into creating such an edition in the article “What’s Critical About a Critical Edition of the Bible?” 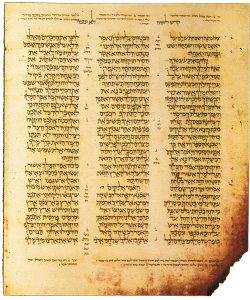 THE MASORETES DOING WHAT THE MASORETES DO BEST. This page comes from the Aleppo Codex. Until a third of it was burned in a 1947 anti-Jewish uprising in Syria, the Aleppo Codex was considered to be the oldest, most complete, and most accurate of the Masoretes’ manuscripts. The Masoretes filled its margins with notes to safeguard against corruption. Credit: David Harris/Ben-Zvi Institute in the Shrine of the Book.

Working in Tiberias during the Middle Ages, the Masoretes recognized the possibility of human error when copying the Hebrew Bible. They tried to combat it by adding supplements to the text. In the margins of the Masoretes’ manuscripts, there are innumerable notes—masorah—to safeguard the text. The precision with which the Masoretes were able to preserve the Hebrew text beginning in the seventh century C.E. is astounding. Nevertheless, the Masoretes were not working with the original Hebrew manuscripts of the Bible. Corruptions had already crept into the versions they copied.

The Masoretes’ efforts preserved the Biblical text in the first millennium C.E. Modern scholarship, with critical editions of the Bible like Biblia Hebraica Quinta, is bringing us even closer to reconstructing the original Hebrew manuscripts of the Bible.

——————BAS Library Members: Read the full article “What’s Critical About a Critical Edition of the Bible?” by David Marcus and James A. Sanders as it appears in the November/December 2013 issue of Biblical Archaeology Review.

Learn more about critical editions of the Bible and Hebrew manuscripts in the BAS Library:

James A. Sanders, “ReViews: The Art and Science of Textual Criticism,” BAR, May/June 2012.

Learn about the Hebrew Bible in a free course of 25 video lectures by Harvard professor Shaye Cohen. Take the course >>

This Bible History Daily feature was originally published on October 25, 2013.