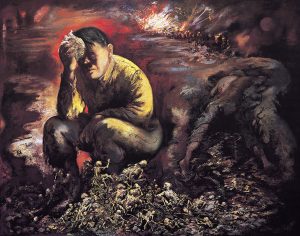 Read Elie Wiesel’s essay on Cain and Abel in the Bible as it originally appeared in Bible Review, February 1998.—Ed.

Mankind’s first murderer, a weary Cain contemplates the death of his brother, Abel, who lies face down (at right) in this 1944 painting by the German-born artist Georg Grosz. Chaotic skeletons struggle at Cain’s feet in Grosz’s painting, titled Cain, or Hitler in Hell. As Elie Wiesel points out in the accompanying essay, the first death in biblical history is a difficult one, raising questions not only about Cain’s responsibility for the death of his brother, but about Abel’s own culpability and God’s role in the killing. The final lesson, according to Wiesel: Killing a man is killing a brother.
Born in Berlin, Georg Grosz (1893–1959) emigrated to the United States in 1933, just a few days before Adolf Hitler took office as German chancellor. Grosz’s paintings present a biting satire of German society, criticizing militarism, blind obedience to political leaders, and moral corruption. Photo: © Estate of Georg Grosz/Licensed by Vaga, New York, NY.

Cain and Abel: The first two brothers of the first family in history. The only brothers in the world. The saddest, the most tragic. Why do they hold such an important place in our collective memory, which the Bible represents for so many of us? Mean, ugly, immoral, oppressive—their story disturbs and frightens. It haunted mankind then and still does, working its way into our nightmares.

At first we become attached to Cain. He shares with his younger brother, Abel, the generous idea of offering gifts to the Lord. But for this, Abel might never have felt the need to do the same. For reasons the text does not bother to explain, however, God accepts the gift from Abel after refusing the gift from Cain.

An unjust Creator of the World? Already? How can we understand this favoritism? What did Abel do so great, beautiful or praiseworthy as to merit the divine sympathy denied to his brother? Cain, innocent victim of unprecedented heavenly discrimination—how can we not wonder about his fate?

As always, the midrasha comes to the rescue in our attempt to fill the gaps left by the biblical text. There we learn that God would have preferred Abel’s gifts—they were of choicer quality.

Until then brothers united, surely devoted one to the other, the two would never be close again. A fight erupted. And Cain killed Abel.

For the first time in history, death occurs. And the first death in history, it is worth underlining, was a murder. Of course we are angry at Cain. Nevertheless, it is not difficult to understand his resentment, even his rage. But he should have restrained himself. One does not kill an innocent person, and certainly not one’s brother. If Cain wished to reproach someone, he should have addressed God, and not his younger brother. Abel succeeded in winning God’s favor? Cain, the older brother, should have been pleased for Abel! Was Cain unable to control his anger? Well, that is understandable. But to throw himself on his more fortunate brother and kill him! Too much!

In the midrashic literature, the antagonism between the two brothers is not limited to the story about their offerings to the Lord. In the midrash, they inherited their dispute from their parents: Cain took the land for himself, and Abel received everything else. Another midrashic suggestion: Cherchez la femme—so let us look for the woman. According to this explanation, the two brothers were both in love with their mother; in another version, with their sister. A third theory: Each wanted to have the Temple of Jerusalem built in his domain. In short, the first fight in human history was also the first religious war.

These three hypotheses suggest an interesting viewpoint—that Cain is not the sole guilty party. God’s role in this quarrel is no longer the main issue. We can now consider each of the participants as an accomplice.

As a matter of fact, at a still higher level, the Talmud does not hesitate to insinuate precisely this. It asks, “Since there is no death without sin, why did Abel merit death?” There is a marvelous answer. It relies on the text, which says, “Cain spoke to his brother Abel. And when they were in the field, Cain set upon his brother and killed him.” But the text makes no mention of what Cain told Abel before killing him, nor what Abel answered. Is it possible that Abel did not pay attention to what his brother said? That Abel’s mind was elsewhere? Was that his sin? His brother, rebuffed, rejected, needed to tell someone of his grief—and he, Abel, was not even listening! This insensitivity is what makes him guilty.

Read “What Happened to Cain in the Bible?” and “Who Was the Wife of Cain?” in Bible History Daily.

Some of our sources go very far in pleading Cain’s case. When God accused him of murder, he could have made a convincing argument: “How was I to know that by hitting Abel he would die, since no one had lost his life before him?” Or, “Since You did not want me to kill my brother, why didn’t You stop me from going all the way? If a thief penetrates into a forbidden garden, is it not the guard’s fault?”

Cain nevertheless remains the archetypal murderer. His flash of anger is not enough to make it a crime of passion worthy of extenuating circumstances. If he was justified in holding a grudge, it should have been against God; he was wrong to lay the blame on his brother. Had he cried out to the heavens to express his pain, even to vent his rage, all would have been forgiven. Powerless against God, Cain took vengeance on the only being near him. That was his fault. And his crime.

Is this the lesson, profoundly human and humanistic, we should draw from this somber story? Perhaps. But there is a second lesson: Two men may be brothers and still become the victim or the killer of the other. And a third: He who kills, kills his brother.

The author of more than 30 novels, plays and profiles of Biblical figures, Elie Wiesel received the Nobel Peace Prize in 1986. This online publication is adapted from Wiesel’s article “Supporting Roles: Cain & Abel,” which was published in Bible Review in February 1998. The article was first republished in Bible History Daily on June 1, 2015. At the inception of Wiesel’s Supporting Roles series in Bible Review, BAS editors wrote:

We are pleased—and honored—to present our readers with the first of a series of insightful essays by Elie Wiesel, the world-renowned author and human rights advocate. Wiesel is best known for his numerous books on the Holocaust and for his profiles of Biblical figures and Hasidic masters. In 1986, he was awarded the Nobel Peace Prize. His occasional series for BR will focus on characters in the Bible that do not occupy center stage—those who play supporting roles.

a. Midrash (plural, midrashim) is a genre of rabbinic literature that includes nonliteral elaborations of biblical texts, often for homiletic purposes.