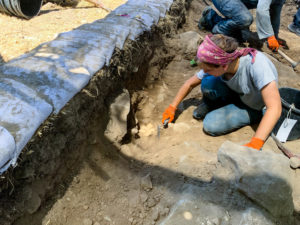 With advances in technology, there are more archaeology tools than ever to help excavators dig into the past. Yet sometimes there is no substitute for a trusty trowel and bucket. Archaeology tools vary greatly by location, budget, and even research question. But, from surveying to recording, what are some of the most common tools used in biblical archaeology today? 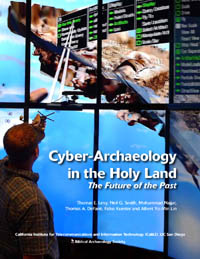 One of the first steps involved in excavating a site is conducting a survey. While the location of some ancient sites is preserved through local tradition and others are discovered during salvage excavation, archaeologists do not always know where to dig. This is where site survey comes in. Archaeological surveys involve the exploration, mapping, and recording of an area to establish the location and extent of a site before a dig even begins. Archaeology tools used during surveys can be as simple as maps and tape measures, which are used to record the location of surface finds and possible archaeological features.

Increasingly, however, archaeologists use higher-tech options, including total stations and geographic positioning systems (GPS). A total station uses lasers to measure distances and angles of objects and areas in relation to a reference point. These devices are very important for creating accurate topographic maps of a site. Even once excavation begins, total stations come in handy in providing exact locations where specific artifacts or architectural features are found. Similarly, GPS relies on earth-orbiting satellites to help pinpoint the exact location of archaeological sites and features.

Once excavation begins, one of the main goals is to move dirt. Some of the most useful excavation tools are shovels, trowels, buckets, and even string. While shovels are useful for digging down quickly, tools such as trowels and brushes are important for carefully excavating around features and artifacts. Buckets, meanwhile, are necessary to move the dirt, and string is useful in marking off excavation squares so that archaeologists can work in clearly defined study areas. At some dig sites, sieves are also used to sift through the excavated material to make sure nothing important is missed.

Throughout the entire archaeological process, it is critically important to record as many details about both the site and its finds as possible. In the field, this is often done with paper and pencil. To record precise details, excavators also use archaeology tools such as total stations and digital cameras. It is also important to have a scale, north arrow, and whiteboard that can be included in photos to provide additional information about the object or excavation unit being photographed. Drones are also being used more and more frequently to record aerial views of the site at various stages in the excavation or survey. Another powerful tool is GIS (Geographic Information Systems). This system combines information collected from maps, GPS, site plans, photos, and notes into a single geographic database that can be easily searched to obtain information about a particular artifact or feature or analyzed to identify meaningful patterns in spatial distribution. 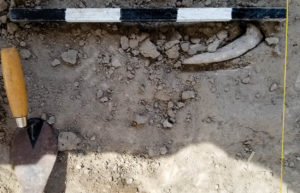 A bone fragment with a 30cm ruler for scale. Courtesy Nathan Steinmeyer.

Additional tools come into play once a find has been discovered. Depending on the object, it might need to be stored or preserved in a particular manner. Pottery sherds and stone tools can often be stored in simple paper or plastic bags. However, organic samples that may be used for radiocarbon dating require more careful storage, as they can become contaminated without proper care. Finds are often sorted, cleaned, and recorded before leaving the site. To do this, archaeologists use toothbrushes and other simple cleaning tools, as well as rulers and scale bars to document the finds.

Many high-tech archaeology tools are now used in the field. These include tools like LiDAR (Light Detection and Ranging), which creates three-dimensional maps of the ground surface. Magnetometry, which measures the magnetism of features below the earth’s surface, can also be used to find buried features without ever having to excavate. Another frequently used non-invasive archaeology tool is ground-penetrating radar. New digital photographic techniques, such as photogrammetry, also allow archaeologists to create three-dimensional images of sites and finds.

Archaeology Tools of the 21st Century