Jill Katz explains how urban anthropology can illuminate the ideological importance of ancient Samaria and Jerusalem after the dissolution of the United Kingdom of Israel.

Ancient Samaria and Jerusalem had a lot in common in the ninth and eighth centuries B.C.E. Both were part of David and Solomon’s United Kingdom of Israel in the tenth century, and both became capitals when it split into the southern kingdom of Judah and the northern kingdom of Israel. Jerusalem became the capital of Judah, and Samaria, Israel.

Jerusalem and Samaria were also very different. In the Archaeological Views column “Jerusalem and Samaria: An Anthropological Tale of Two Cities” in the May/June 2014 issue of Biblical Archaeology Review, Jill Katz examines how the field of urban anthropology sheds light on the ideological differences between ancient Samaria and Jerusalem.

Urban anthropology examines cities in their social and political contexts. Jill Katz, clinical assistant professor of archaeology at Yeshiva University, explains that “[as] social entities, cities have a variety of social roles, including ideological, political/administrative and economic. Yet the relative importance of these social functions is not random but rather derives from the strength of both the city’s economy and the controlling state.”

In urban anthropology terms, ancient Samaria (Israel) would be considered an administrative city—a city with strong political power and control over the agriculture-dependent economy, governed by leaders with access to great wealth. Katz writes that the administrative city “is a repository of state power but unifies through coercion rather than common ideology.” 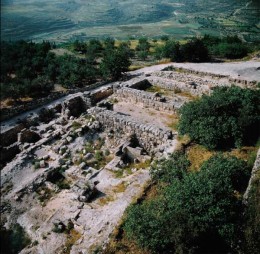 Samaria was the capital of the northern Kingdom of Israel. Remains of Roman-era Sebaste adorn the site’s acropolis. Photo: Duby Tal/Albatross.

By contrast, Jerusalem (Judah) would fit the model of a regal-ritual city—a city with weak political power and an economy reliant on rural agriculture, but with an ideological status that plays a dominant role. Iron Age Jerusalem was principally a sacred city, its social life oriented around the sacred calendar.

These urban anthropology paradigms, as Jill Katz reveals, help us understand how ancient Samaria and Jerusalem were viewed and valued by their respective inhabitants. When the Assyrians conquered the kingdom of Israel in the late eighth century B.C.E., Samaria was not rebuilt (the site is still not in great shape today). Gone with its state power was the reason for its existence. On the other hand, when the Jews returned to Jerusalem after the Babylonian conquest in 586 B.C.E., the city (which, as Katz notes, “never lost its regal-ritual essence”) was rebuilt and its role as the center of Jewish spiritual and ritual life was restored.

——————
Subscribers: Read the full Archaeological Views column “Jerusalem and Samaria: An Anthropological Tale of Two Cities” by Jill Katz as it appeared in the May/June 2014 issue of Biblical Archaeology Review.

This Bible History Daily feature was originally published on April 30, 2014.

Was Biblical Israel an Egalitarian Society?