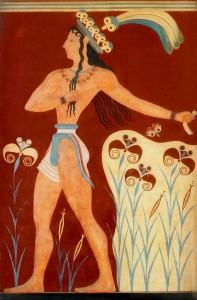 Who Were the Minoans?

This Bible History Daily article was originally published in May 2013. It has been updated.—Ed.

Who were the Minoans? The Minoan civilization is remembered for its ornate frescoes, including this Prince of the Lillies from the palace at Knossos.

Crete’s Minoan civilization has long been considered Europe’s first great Bronze Age society. The floruit of the Minoan civilization, which spread across Crete in the third millennium B.C.E., occurred in the 18th–16th centuries B.C.E., in the late Middle Bronze Age and the start of the Late Bronze Age. The island is dotted with magnificent palaces, including labyrinthine Knossos, Phaistos and Mallia, and Minoan art and traditions have captivated and influenced the Mediterranean world for thousands of years.

Who were the Minoans? Despite their celebrated legacy, the Minoan civilization remains shrouded in mystery. We do not know what language was spoken on Crete, and the scripts of the early Minoan civilization—Cretan Hieroglyphs and Linear A—have eluded translation attempts for over a century. Despite extensive archaeological research exploring the history of Crete, the Minoan civilization has always kept close ties to the world of mythology. Sir Arthur Evans, the first person to carry out extensive excavations in Crete, named the society after the mythological king Minos. Crete’s Minoan landscape serves as the setting for countless legends, including the birthplace of Zeus, the labyrinth where Theseus killed the Minotaur and the prison that Deadalus and Icarus fled with their ill-fated wings.

But who were the Minoans? Who were the people that left us with such grand mysteries and ornate palaces?

Sir Arthur Evans claimed that the ancestors of the Minoan civilization came from North Africa, but more recent scholars have suggested dozens of additional forefathers for the Minoan population. On May 14, 2013, Nature Communications published the study “A European population in Minoan Bronze Age Crete,” analyzing mitochondrial DNA from Minoan osseous tissue found in caves at the Cretan Lassithi plateau. It suggests that the Minoan civilization was comprised of local Europeans rather than outsiders. The Greek and American research team writes that “Our data are compatible with the hypothesis of an autochthonous development of the Minoan civilization by the descendants of the Neolithic settlers of the island” and that “shared haplotypes, principal component and pairwise distance analyses refute the Evans North African hypothesis.” 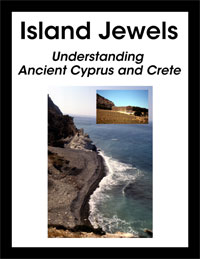 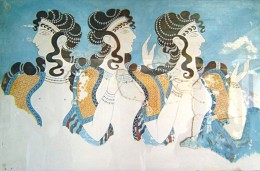 Who were the Minoans? Knossos’s Ladies in Blue are genetically related to modern Europeans, according to a recent DNA study. Archaeological Museum of Iraklion.

The researchers examined over 100 bone samples from the third and second millennia B.C.E. and found a combination of distinctly European and uniquely Minoan characteristics—with no trace of African descent. The DNA samples are consistent with that of Neolithic, Bronze Age and modern European populations, especially Crete’s modern population. The Minoan people may be related to groups that migrated from Anatolia millennia earlier; if true, this would allow researchers to use cues from known Indo-European languages to help decipher the still-unknown language of the Minoan civilization.

While mysteries about the seafaring Minoan civilization remain, we are one step closer to answering the question: Who were the Minoans? As University of Washington geneticist George Stamatoyannopoulos says, “We now know that the founders of the first advanced European civilization were European.”

What Does the Aegean World Have to Do with the Biblical World?
Aegean archaeology specialist Louise Hitchcock explores the importance of the Aegean world in Biblical archaeology.

Read more about Minoan civilization in the BAS Library:

“Past Perfect: In Pursuit of Minoan Crete,” Archaeology Odyssey, January/February 2005.