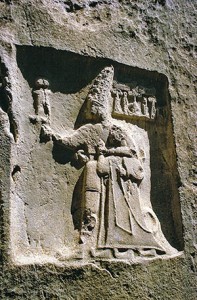 Who Were the Hittites?

Archaeology and the Bible give different answers

Who were the Hittites? At one time the Hittites were one of three superpowers in the ancient world. Tudhaliya IV (1237–1209 B.C.E.) ruled over the Hittite Kingdom during its heyday and is depicted here on a rock carving from the Hittites’ sacred open-air shrine at Yazilikaya, less than a mile from the Hittite capital of Hattusa in present-day Turkey. Photo: Sonia Halliday.

Who were the Hittites? This question is not as simple as it appears. There is plenty of evidence from archaeology and the Biblical texts, but the two sources of information are not compatible, which adds an element of mystery to this ancient kingdom. The article “The Hittites—Between Tradition and History” in the March/April 2016 issue of Biblical Archaeology Review examines what archaeology and the Bible say about the Hittites.

Who were the Hittites according to archaeology? As early as 1900 B.C.E., an Indo-European people began to settle in what is now Turkey. By the 16th century B.C.E., they were powerful enough to invade Babylon. Their might continued to expand until they were a superpower on the level with Egypt and Assyria. Relations with Egypt were particularly volatile and included the famous Battle of Kadesh and the eventual signing of the world’s oldest peace treaty. The Hittite capital, Hattusa, has been excavated, revealing a formidable and religious empire.

Excavation evidence shows that Hattusa was invaded and burned in the early 12th century B.C.E., but this was after the city had largely been abandoned. In the 14th century B.C.E., Carchemish in northern Syria was made a vice-regal seat. As the Hittites began abandoning the land of Hatti during the region-wide decline at the end of the 12th century B.C.E., they may have fled to this location.

Who were the Hittites according to the Bible? The Hittites play a prominent role at key places in the Hebrew Bible: Ephron the Hittite sells Abraham the family burial ground (Genesis 23); Esau married Hittite women, and Rebecca despised them (Genesis 26:34); frequently they are listed as one of the inhabitants of Canaan (e.g., Exodus 13:5; Numbers 13:29; Joshua 11:3); King David had Uriah the Hittite killed in order to acquire Uriah’s wife (2 Samuel 11); King Solomon had Hittites among his many wives (1 Kings 10:29–11:2; 2 Chronicles 1:17); and the prophet Ezekiel degrades Israel with the metaphor of a Hittite mother (Ezekiel 16:3, 45).

“The impression is that many Hittites are living in the land of Canaan during the time of the Founding Families … And this impression is reinforced by Biblical references to Hittites during the Kingdoms of Israel and Judah,” notes the BAR article “The Hittites—Between Tradition and History.” 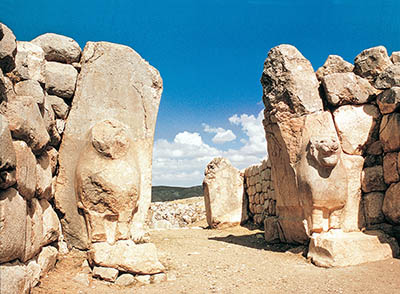 The wall around Hattusa was more than 6 miles long and had several decorated gates. Visitors to the city would enter through the Lion Gate—named for the stone lions on either side of the entrance. The lion was a symbol of protection, defiance and royalty in Hittite culture. Photo: Sonia Halliday Photographs/Photo by Jane Taylor.

According to the BAR article, “[T]his still leaves us with an open question regarding the references to the Hittites during the time of the patriarchs. To a certain extent, the composition history of the Pentateuch may be relevant to this discussion. If one were to assume that these narratives depict historical realities that were written down close to the time of occurrence, then one might conclude that the references are to the original Hittites rather than the Neo-Hittites. However, the majority of scholars believe that these narratives were composed hundreds of years after the events that they describe and often contain anachronisms for the time of composition superimposed on the narrative time. This would suggest that the references reflect the Neo-Hittites.”

So who were the Hittites? The older Hittites never self-identified as Hittites, but called their language Nesite and their land Hatti, referring to themselves as the people of Hatti. Had scholars known from the beginning what has been subsequently uncovered, these people would probably be called Nesites or perhaps Nesians. When the once-mighty kingdom collapsed, those in the former Syrian vassal states kept the culture alive, becoming the Neo-Hittites. The archaeological record reveals the story of the original Hittites, while the Bible refers mostly to the Neo-Hittites.

For more on the Hittites as told through archaeology and the Bible, read the full article “The Hittites—Between Tradition and History” in the March/April 2016 issue of Biblical Archaeology Review.

——————
BAS Library Members: Read the full article “The Hittites—Between Tradition and History” in the March/April 2016 issue of Biblical Archaeology Review.
Not a BAS Library or All-Access Member yet? Join today.

Read more about the Hittites in the BAS Library:

This Bible History Daily feature was originally published on February 16, 2016.