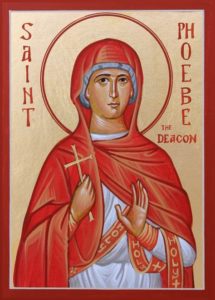 A closer look at Paul’s trusted patron and emissary

A modern depiction of St. Phoebe, a leader in the early Christian movement who was one of Paul’s most trusted patrons and emissaries. In his letter to the Romans, Paul refers to Phoebe by the Greek term diakonos, which most Bible’s translate as “deacon.” However, this term, at least during the first century C.E, most probably referred to a “minister” or leader of a congregation.
Credit: Larry Kamphausen; used under CC-BY-SA-4.0.

Who was Phoebe? That’s a good question!

This first-century C.E. leader of the early Christian community makes a cameo appearance in Romans 16:1–2. Paul graciously introduces her to fellow believers in Rome. Paul’s words establish Phoebe’s high standing in Cenchrea, her home city located near Corinth, and with him. They assure a ready welcome among like-minded followers of Jesus. Warm, personalized greetings to more than two dozen men and women follow, ending his epistle.

A study of Romans 16:1–2 reveals an amazing woman, one Paul treats as a fellow minister, one he forthrightly, and with humor, acknowledges as having money.

However, Phoebe seems under-recognized today as a full minister. Paul’s introduction equates her with other leaders in the early movement, men who traveled, evangelized and planted, and led churches. But translations indicate a gender bias and diminish this woman’s influence.

First, the KJV: “I commend to you Phebe, our sister, which is a servant of the church which is at Cenchrea: That ye receive her in the Lord, as becometh saints, and that ye assist her in whatsoever business she hath need of you: for she hath been a succorer of many, and of myself also.”

Now, the more contemporary NIV: “I commend to you our sister Phoebe, a deacon of the church in Cenchreae. I ask you to receive her in the Lord in a way worthy of his people and to give her any help she may need from you, for she has been the benefactor of many people, including me.”

Paul’s appositives show Phoebe probably led the Cenchrean congregation that probably met in her home (Finger 1988:5). She served as a minister like Paul (Ephesians 3:7), Tychicus (Ephesians 6:21), Epaphras (Colossians 1:7), and Timothy (1 Timothy 4:6). She freely gave of her wealth to finance and spread the new faith.

In typical fashion, the Bible shares nothing of Phoebe’s age, ethnicity, or marital status; it omits how she became a believer and how she made her money. Instead, another (in this case Paul) describes her. Like Tabitha in Acts 9:36–43, Phoebe remains silent. Others praise them.

Her Saint’s Day is September 3. Art throughout the ages depicts Phoebe, robed in red or purple, as a woman of peaceful face, direct gaze, and graceful hands.

However, deacon, as it evolved and is now recognized, became part of ecclesiastical governance only in the fourth century (Jankiewicz 2013:11).

Jewish insights aid in understanding diakonos in Phoebe’s day. The Complete Jewish Bible calls Phoebe “the shammash of the congregation at Cenchreae.” A shammash directs and leads public worship.

Since diakonos also designates Jesus and Paul but calls them “ministers” (Romans 15:8, 16 KJV), it seems odd that when associated with Phoebe, it becomes “servant” and “deacon.”

A proper reading indicates Phoebe was a minister to the whole church at Cenchrea and not one who served in an office limited only to women (Schussler Fiorenza 1986:425).

The term also refers to a letter-carrier (Wilder 2013:44, 46). If Phoebe carried the letter in her luggage or on her person to Rome, she probably delivered it to the house churches in Rome.

To insure against transit loss, she probably memorized it. During her delivery, Phoebe could step aside, explain its thorny parts, answer questions, and then resume recitation (Chapple 2011:212–213).

If she understood Paul’s thinking, she likely participated in the letter’s formation. Perhaps Tertius, the one penning the epistle (Romans 16:22), was her paid scribe. No doubt Phoebe updated the Roman believers on news from the Corinth and Cenchrea congregations.

Developing the idea of shammash, leader/minister, Paul adds prostatis, a word targeting Phoebe’s wealth and the Roman custom of patronage. As a leader/patron, she probably used her wealth to further the Gospel (Miller 2011:17–18). In its verbal form, prostatis can mean to care for, give aid to, and preside over (Moo 1996:915).

Since prostatis appears only in Romans 16:2, it is called a hapax legomenon.

The Septuagint (the third-century B.C.E. Greek translation of the Hebrew Bible), however, uses prostatis several times and always in the context of leadership, responsibility, and finances. Consider these examples:

As applied to Phoebe, prostatis carries the ideas of protecting the weak, shielding people from suffering, and “fighting the battles of the oppressed” (Deen 1955:231).

The nuance, “helper,” may have started around the ninth century. By then, ecclesiastical authority was male-centered and recognizing a woman as a leader may have been difficult.

Paul presents Phoebe as a patron, wealthy and respected, who uses her influence to help him and other Christians (Gaventa 1992:320). Quite possibly, Phoebe had agreed to finance Paul’s dream of going to Spain and evangelizing the outer realms of the Roman Empire (Romans 15:24, 28).

Paul’s silence about the affairs of the church at Cenchrea also reinforces his esteem for Phoebe. For instance, there is no Pauline letter to the church at Cenchrea, although the nearby Corinthian congregation received two. There is no evidence that lawsuits, immoral sexual practices, or disorderly worship happened in Cenchrea; see 1 Corinthians 6:1–11; 6:12–20; 14:1–25. Phoebe received no pastoral letter of advice, although Paul mentored Timothy and Titus in new pastorates and wrote them. Romans 16:1–2 indicates Paul considered Phoebe a colleague.

Phoebe and Paul served as mutual ambassadors and reciprocal patrons. Paul introduced her as a woman of high standing, setting the stage for her to have a successful visit. He asked Roman believers to aid her in her visit, perhaps in a business way.

Phoebe, likewise, acted as Paul’s emissary, his representative to churches he did not found but eagerly sought to visit (Romans 1:10). Phoebe introduced Paul to the Romans via his letter. She conveyed current news and individual greetings, thereby setting the stage for what Paul hoped to be his successful visit to Rome.

As a first-century woman, Phoebe breaks the mold. She leads the Cenchrean congregation, has money, and generously shares it. Paul knew the church at Cenchrea was in good hands. As spiritual brother and sister, they co-labored in the Gospel.

Phoebe follows the tradition of Miriam, Deborah, the Queen of Sheba, and Huldah, all leaders who earlier crossed the biblical stage. These women show that gender neither denotes nor precludes leadership. Instead, leadership is recognized. Those being led know whom they want to follow and whom they do not.

Paul’s open praise freed Phoebe from the necessity of many self-introductions. He commended her character, leadership, and accomplishments. He acknowledged her wealth, hospitality, and generosity. He seemed to chuckle publicly as he included himself as one benefitting from her patronage.

So who was Phoebe?

The apostle Paul recognized Phoebe endearingly as his sister in the Lord. He commended her as a minister of sound doctrine; an acknowledged minister/leader who oversaw a church with few apparent problems; a skilled businesswoman; and a generous, caring friend and patron. No doubt she had a delightful visit.

Dr. Robin Gallaher Branch serves as an adjunct professor at Christian Brothers University in Memphis, Tennessee, and in a research capacity at North-West University in Potchefstroom, South Africa, where she did her Fulbright Fellowship in 2002–2003. She is the author of numerous academic articles and two books, Six Biblical Plays for Contemporary Audiences (Cascade, 2016) and Jeroboam’s Wife: The Enduring Contributions of the Old Testament’s Least-Known Women (Wipf & Stock, 2018).
—A version of this post first appeared in Bible History Daily in 2021

Read more by Dr. Robin Gallaher Branch about women in the Bible:

Deborah in the Bible by Robin Gallaher Branch
Deborah, the only female judge in the Bible, excelled in multiple areas. She served ancient Israel as a prophet, judge, military leader, songwriter, and minstrel.

Judith: A Remarkable Heroine by Robin Gallaher Branch
The Book of Judith presents a truly remarkable heroine. Judith is introduced as a devout, shapely, beautiful and wealthy widow who exhibits characteristics equal to those of Israel’s finest warriors.

Anna in the Bible by Robin Gallaher Branch
Anna is one of the Bible’s most unusual women. Introduced at the end of the Birth Narrative (Luke 1:1-2:40), Anna concludes the sextet of named, pious Israelites surrounding the miraculous births of John and Jesus.