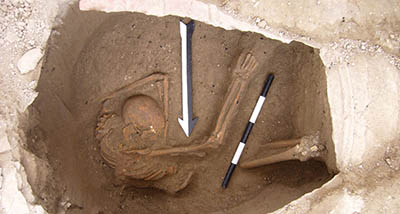 What happened to the Canaanites? DNA sequencing was conducted on five skeletons from Canaanite Sidon, including this one. The results indicate that there is a “genetic continuity” between the Canaanites at Sidon and the modern Lebanese. Photo: Courtesy of Claude Doumet-Serhal.

What happened to the Canaanites?  Researchers conducted DNA sequencing on ancient Canaanite skeletons and have determined where the Canaanites’ descendants can be found today.

The Canaanites were a Semitic-speaking cultural group that lived in Canaan (comprising Lebanon, southern Syria, Israel and Transjordan) beginning in the second millennium B.C.E. and wielded influence throughout the Mediterranean.

In the Hebrew Bible, the Canaanites are described as inhabitants of Canaan before the arrival of the Israelites (e.g., Genesis 15:18–21, Exodus 13:11). Little of the Canaanites’ textual records remain, perhaps because they used papyrus instead of the more durable clay for writing. Much of the Canaanites’ history is reconstructed through the writings of contemporary peoples in addition to archaeological examinations of the material record.

Marc Haber, Claude Doumet-Serhal, Christiana Scheib and a team of 13 other scientists recently published their DNA findings in The American Journal of Human Genetics (AJHG). The researchers sequenced the genomes of five individuals who were buried in the Canaanite city of Sidon in Lebanon around 1700 B.C.E. as well as the genomes of 99 individuals from Lebanon today.

The results of their study demonstrated a connection: “We show that present-day Lebanese derive most of their ancestry from a Canaanite-related population, which therefore implies substantial genetic continuity in the Levant since at least the Bronze Age,” wrote the researchers in AJHG. 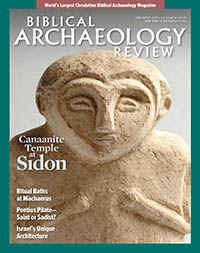 A painted limestone figurine of a human-ram deity from Canaanite Sidon appears on the cover of the July/August 2017 issue of BAR. Photo: Courtesy of Claude Doumet-Serhal.

In the July/August 2017 issue of Biblical Archaeology Review, Claude Doumet-Serhal provides a glimpse of Canaanite Sidon in the Middle Bronze Age:

At the dawn of the second millennium B.C.E., the site was covered by a thick layer of deliberately cleaned sand between 3 and 4.6 feet deep, brought from the nearby seashore. This “purifying” activity must have taken weeks of hard labor. At this point Sidon became a burial site. To date, 142 burials have been found in this sand and in subsequent layers on top of it dating until around 1500 B.C.E. A funerary feasting tradition took place at the time of burial. High-ranking individuals were buried with objects indicating their power, rank and reputation, such as a Minoan cup (1984–1859 B.C.E.) from Phaistos, Crete, which was found inverted, as was the common Aegean practice.

The DNA study conducted on the skeletons from Sidon is part of the researchers’ larger effort to understand population histories in the Levant.

“Many of our inferences rely on the limited number of ancient samples available, and we are only just beginning to reconstruct a genetic history of the Levant or the Near East as thoroughly as that of Europeans who, in comparison, have been extensively sampled,” the researchers wrote in AJHG.

More on the Canaanites in Bible History Daily:

Canaanite Fortress Discovered in the City of David

Who Were the Phoenicians?

This Bible History Daily feature was originally published on August 9, 2017.