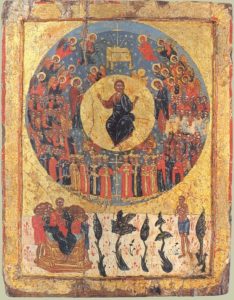 Second Coming. This icon from Greece (c. 1700) depicts the Second Coming of Jesus and the bodily resurrection of believers. First Corinthians 15, the earliest passage on resurrection in the New Testament, shows the understandings of the apostle Paul on the resurrection of Jesus. Photo: Public domain, via Wikimedia Commons

As the earliest passage on Jesus’s resurrection in the New Testament, 1 Corinthians 15 is significant. Yet it can also be confusing, as it talks of “physical” bodies and “spiritual” bodies. In the Spring 2022 issue of Biblical Archaeology Review, Ben Witherington III of Asbury Theological Seminary delves into this biblical passage—and what it reveals about the understanding of the apostle Paul on the resurrection of Jesus and on the future resurrection of believers—in his article, “Paul on the Resurrection.”

What Does 1 Corinthians 15 Mean?

What is a “physical” body (psychikon soma), and what is a “spiritual” body (pneumatikon soma)?

Before answering that, Witherington provides a bit of background on the apostle Paul. He reminds readers that Paul was a Pharisee. The Pharisees were a Jewish sect, active from the second century B.C.E. through the first century C.E. They believed in a future afterlife with bodily resurrection—unlike the Sadducees, another Jewish sect that did not believe in resurrection. Witherington explains that the Pharisees’ belief was partially derived from “a certain understanding of Daniel 12:1–3 and the development of thought that ensued from reflection on that text in subsequent centuries.” Daniel 12 talks of a collective resurrection: “Many of those who sleep in the dust of the earth shall awake, some to everlasting life, and some to shame and everlasting contempt” (Daniel 12:2).

Paul is contrasting the making of the first human, Adam, by God breathing life into him, with the condition of the last Adam, Jesus, who was raised from the dead (the phrase in the Greek is even more graphic—“raised from out of the dead ones,” not merely “raised from death”). … Paul is saying that Adam’s body was animated by life-breath (psyche meaning “lifebreath,” the animating principle, not “soul”). He contrasts this with how the risen body of Jesus was animated by the Spirit. In other words, the phrase pneumatikon soma does not mean, and indeed cannot mean, a body made out of nonmaterial stuff (whatever that would be). No, he means a body totally energized, empowered, and given life by God’s Spirit. This is precisely why he says that the merely mortal body must be replaced by one that will endure forever, a body permanently alive and energized by God’s Spirit—immune to disease, decay, and death, so death can have no more victory over it.

So, according to Witherington’s investigations, what does 1 Corinthians 15 mean? The teachings of the apostle Paul on the resurrection of Jesus in this passage show that Paul believed Jesus had a Spirit-empowered, material, resurrected body. He further believed that one day every Christian would receive a resurrected Spirit-empowered body on earth—in the kingdom of God, established by Jesus at his second coming (1 Corinthians 15:22–24, 50).

Learn more about 1 Corinthians 15 in Ben Witherington III’s article “Paul on the Resurrection,” published in the Spring 2022 issue of Biblical Archaeology Review.

——————Subscribers: Read the full article “Paul on the Resurrection” by Ben Witherington III in the Spring 2022 issue of Biblical Archaeology Review.

What “God Is Love” Actually Means

Mary, Simeon or Anna: Who First Recognized Jesus as Messiah?

Speaking in Tongues in the Bible

Afterlife: Ancient Israel’s Changing Vision of the World Beyond