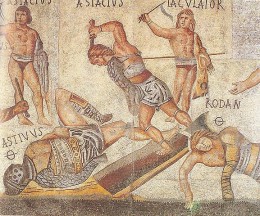 What Did Gladiators Eat?

“For abdominal cramp or bruises,” states Marcus Varro, and I quote his very words, “your hearth should be your medicine chest. Drink lye made from its ashes, and you will be cured. One can see how gladiators after a combat are helped by drinking this.”
—Pliny, Natural History XXXVI.203

Detail of a third–fourth-century C.E. mosaic depicting gladiatorial combat, now on display in the Galleria Borghese in Rome. Photo: Licensed under public domain via Wikimedia Commons.

The Roman gladiator calls to mind a fierce fighter who, armed with an assortment of weapons, battled other gladiators—and even wild animals. What did gladiators eat? Roman author Pliny the Elder reported that gladiators went by the nickname “hordearii” (“barley-eaters”) and drank a tonic of ashes after combat (Pliny, NH XVIII.72, XXXVI.203). A study recently published in the scientific journal PLOS ONE confirmed that gladiators really did eat mostly plants—especially barley and wheat—and may have indeed consumed ashes.

Gladiators were typically enslaved prisoners of war and criminals, though free men as well as women participated in gladiatorial games. What began as a component of funeral rites in the early Roman Republic evolved over centuries into bloody spectacles for the entertainment of the Roman people, reaching their peak in popularity in the second century C.E.

Researchers from the Institute of Forensic Medicine at the University of Bern and the Medical University of Vienna aimed to investigate how the diet of gladiators compared to the rest of the population. Using spectroscopy to conduct isotopic analysis on the bone remains from a second–third-century C.E. gladiator cemetery in Roman Ephesus in Turkey, the researchers were able to confirm that the individuals buried in the cemetery consumed a mostly plant-based diet—as did the rest of the population in Ephesus. 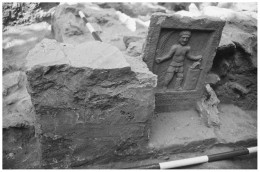 “Gladiators appear to have eaten a diet similar to that of most other occupants of the Roman Empire, and the authors’ isotope data fit well with my own and others’ research into diet in the first few centuries C.E.,” said Kristina Killgrove, bioarchaeologist at the University of West Florida, in an email to Bible History Daily.

The study further found that those buried in the gladiator cemetery had higher strontium-calcium ratios than their contemporaries. This suggests that the gladiators at Ephesus may have really drunk a tonic of ashes as described by Pliny (“cinis lixivus potus”).

“Plant ashes were evidently consumed to fortify the body after physical exertion and to promote better bone healing,” study leader Fabian Kanz explained to ScienceDaily. “Things were similar then to what we do today—we take magnesium and calcium (in the form of effervescent tablets, for example) following physical exertion.”

In an email to Bible History Daily, University of Hawaii at Manoa classicist Daniel Harris-McCoy offers a caution when using Pliny the Elder as a textual source:

“Pliny the Elder is willing to print anything and everything, which makes him fun to read but sometimes hard to use as a source of solid information. He includes wild ‘facts’ about the giant gold-digging ants of India and even talks about ancient hallucinogenic drugs. But the material about gladiators consuming an ash drink seems credible, especially since Varro is his source.”

Read the study in PLOS ONE.

This Bible History Daily feature was originally published on October 24, 2014.

A Feast for the Senses … and the Soul