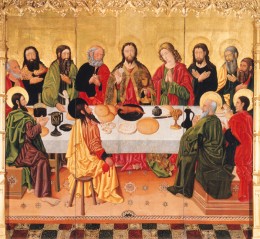 Was Jesus a Jew?

Was Jesus a Jew? Some people claim that Jesus was a Christian. Some have claimed that he was an Aryan Christian. But in recent decades scholars have been returning to ancient historical settings and discovering the Jewish Jesus. Anthony J. Saldarini’s Bible Review article “What Price the Uniqueness of Jesus?” cautions against wrenching Jesus out of his Jewish world.

Was Jesus a Jew? This late-15th-century painting by the Spanish artist known as the Master of Perea depicts a Last Supper of lamb, unleavened bread and wine—all elements of the Seder feast celebrated on the first night of the Jewish Passover festival. Whether the Last Supper was a Passover Seder is one issue scholars have raised as they have been discovering the Jewish Jesus. Photo: Christie’s Images/Superstock.

Jesus himself didn’t write the Gospels. They are late-first-century accounts that we are continually interpreting. In seeking to emphasize the uniqueness of Jesus, traditions have distanced Jesus from the cultural setting of his day, whether that be his Jewish roots or the larger Greco-Roman world.

In the 19th century, German theologians emphasized this distance as Saldarini explains below. Was Jesus a Jew? Was Christianity a Jewish sect? The conflicts in the early church between Peter, claiming his Jewishness, and Paul, the missionary to Gentiles, were more complex than some 19th-century theologians have allowed.

Albrecht Ritschl saw a Jesus who attacked Scribes and Pharisees and, he claimed, Judaism itself. Jesus taught something so new that it overthrew and superseded his Jewishness. Christianity itself was to be purified of its Jewish elements. Ritschl turned this theology to attacks on Jews, giving ammunition to the 20th-century Holocaust.

Ritschl’s Jesus focused on his personal relationship with God—a relationship that transcended historical contexts. But Jesus was born in a Jewish home and lived in the Jewish culture and in the land of Israel. Was Jesus a Jew? Yes, Theological study is further discovering the Jewish Jesus and what his Jewishness means to Christian theology and Jewish-Christian relations.

For Christians, Jesus’ Jewishness is critically connected to his familiar role as Christ—more than an ethereal spiritual role but a role rooted in the history of the people of Israel. Disassociating Jesus from his ethnic roots can lead to violence toward Jesus’ own people. As Anthony J. Saldarini elaborates below in “What Price the Uniqueness of Jesus?” discovering the Jewish Jesus is a task that can give Christians a better understanding of Jesus.

In the free ebook Who Was Jesus? Exploring the History of Jesus’ Life, examine fundamental questions about Jesus of Nazareth. Where was he really born—Bethlehem or Nazareth? Did he marry? Is there evidence outside of the Bible that proves he actually walked the earth?

What Price the Uniqueness of Jesus?

Before we laugh at this foolishness, we should remember that we have not one word written by Jesus and not one contemporary account of his activities. Instead, we have four late-first-century interpretations of Jesus: the Gospels. Each demands and has received constant reinterpretation. Though the risk of misinterpreting Jesus is great, every generation has no choice but to try to make sense of the Gospels.

We necessarily interpret as we read, but not all interpretations are created equal, despite the claims of some postmodern thinkers. A Christian Jesus is a parochial, self-serving myth and an Aryan Jesus a perverse one. But why then have Christians so persistently thought of Jesus as a Christian and resisted admitting the obvious, that Jesus was a Jew? Answer: the pervasive problem of uniqueness.

All religious traditions seek to present themselves as somehow special, better or primary, as irreplaceable or unique. For Christians this means that either Jesus as a person or his teachings and actions must stand out from his historical setting. For centuries the theological claim that Jesus is divine sufficed. In our empirical world of science and history, many Christian scholars take another tack; they seek to make Jesus dissimilar from the Judaism of his day and from the Greco-Roman world in which it was set.

As is often the case, contemporary historical and theological conflicts have their roots in the fertile scholarship of 19th-century Germany. The names Ferdinand Baur (1792–1860) and Albrecht Ritschl (1822–1889) may not immediately leap to mind, but a brief sketch of their activities will help illuminate Christian biases then and today.

Baur argued successfully that early Christianity had originated historically within Judaism and, less convincingly, that all of early Christian history reflected a struggle between a Jewish wing (led by Peter) and a gentile wing (led by Paul) until a synthesis was achieved. Subsequent scholarship has established that Paul was much more Jewish, and the conflicts among the early followers of Jesus much more complex, than Baur thought. But his fundamental point, the Jewish matrix of Christianity, endures.

In “Uncovering the Jewish Context of the New Testament,” Amy-Jill Levine reveals what Jews (and Christians) should know about Christian scripture and Jesus the Jew.

A Jesus who taught like a Jew and an early Christian community that looked like a Jewish sect troubled many 19th-century German Lutheran scholars, who preferred to envision a Jesus who taught a new and unique doctrine that overthrew the established tradition. In reaction to Baur, Albrecht Ritschl “solved” the problem by attacking the Jews. For him, Jesus did not reform or transform Judaism, he condemned it. Jesus the Jew, in Ritschl’s view, transcended Judaism by purifying Christianity of its Jewish elements. From the middle of the 19th century until World War II, numerous German scholars, including Adolf Harnack and Rudolf Bultmann, followed Ritschl’s lead in one way or another. None were Nazis, but reading them after the Holocaust leaves us with an eerie sensation.

Ritschl protected the uniqueness of Jesus and extricated him from his Jewish setting by replacing the Jewish Jesus with a Romantic Jesus who had a supernatural, ineffable relationship with God, a relationship that superseded all historical influences. Deep personal relationships are the stuff of modern theology and spirituality, but separated from the weave and grit of historical reality, the personal Jesus quickly devolves into a personal projection disconnected from community and culture.

So we must face the crucial question: Does Jesus the Jew—as a Jew—have any impact on Christian theology and on Jewish-Christian relations? Or is Jesus’ life as a Jew just accidental? After all, he had to be born something: Incan or Ethiopian, Mongolian or whatever. Is Jesus’ Jewishness superseded by his role as Christ, the Messiah (the “Anointed One”), sent by God to save all nations?

To wrench Jesus out of his Jewish world destroys Jesus and destroys Christianity, the religion that grew out of his teachings. Even Jesus’ most familiar role as Christ is a Jewish role. If Christians leave the concrete realities of Jesus’ life and of the history of Israel in favor of a mythic, universal, spiritual Jesus and an otherworldly kingdom of God, they deny their origins in Israel, their history, and the God who has loved and protected Israel and the church. They cease to interpret the actual Jesus sent by God and remake him in their own image and likeness. The dangers are obvious. If Christians violently wrench Jesus out of his natural, ethnic and historical place within the people of Israel, they open the way to doing equal violence to Israel, the place and people of Jesus. This is a lesson of history that haunts us all at the end of the 20th century.

“What Price the Uniqueness of Jesus?” by Anthony J. Saldarini originally appeared in Bible Review, June 1999. The article was first republished in Bible History Daily in September 2011.

Did Jesus Exist? Searching for Evidence Beyond the Bible by Lawrence Mykytiuk

Was Jesus’ Last Supper a Seder? by Jonathan Klawans

When Did Christianity Begin to Spread?