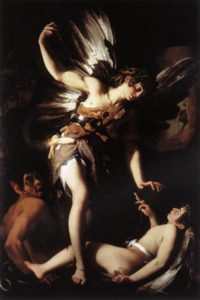 Unlike Hercules, Achilles, and Perseus, demigods were seen more negatively by ancient Israelites

Divine love bringing an end to an illicit trust between Cupid and the Devil. An artistic representation of love being corrupted and God bringing it to an end.

Sandwiched between the genealogies of Adam’s descendants and the tale of Noah’s flood are a few enigmatic verses that leave many of us scratching our heads and wondering what it’s all about:

When man began to multiply on the face of the land and daughters were born to them, the sons of God saw that the daughters of man were attractive. And they took as their wives any they chose. Then the Lord said, “My Spirit shall not abide in[a] man forever, for he is flesh: his days shall be 120 years.” The Nephilim were on the earth in those days, and also afterward, when the sons of God came in to the daughters of man and they bore children to them. These were the mighty men who were of old, the men of renown. (Genesis 6:1–4)

More often than not it’s just easier to shrug our shoulders and move on to the story of Noah and his family. But the questions remain all the same: Who are these “sons of God” and their Nephilim children, and why would the author of Genesis choose to mention them at all?

In the text we discover that the “sons of God” (Hebrew Benai-Elohim) succumbed to their passions for the “daughters of Men” and had children with them. These offspring were known as the Nephilim (literally, “the fallen ones”), and they were the “mighty ones of old” and “men of renown.”

Though centuries of rabbinical and church tradition would say otherwise, the audience to whom the text was intended would have understood the “sons of God” to be the members of the divine assembly mentioned throughout the literature of the ancient Near East, including the Bible (see Job 6:1; Job 38:7; Psalm 29:1; Psalm 82). In the biblical texts, the “sons of God” are usually described as lesser heavenly beings in the service of the Most High. In the texts of the cultures that surrounded Israel, like the Canaanite literature found at Ugarit, the “sons of God” similarly appear as divine beings in the service to the king of the gods, El, and his queen, Asherah. They include the likes of Baal, Anath, Astarte, Yam, and Mot. The audience of Genesis would have definitely understood these so-called “fallen ones” to be the offspring of celestial beings and human women. (Coincidentally the root of the word Nephilimis used elsewhere for miscarriages and other strange births. Exodus 21:22)

The reason the author chose to mention the Nephilim can be found in their description, which translated means something to the effect of “ancient champions who made a name for themselves.” Every society has myths and legends about gods having children with humans who become epic heroes and legendary kings. Many of us in the West are familiar with the exploits of Hercules, Achilles, and Perseus, and the Classical versions of their tales have been told and retold for well over two thousand years. However, many famous Classical stories are merely reimagined from earlier Near Eastern ones. There was a vast corpus of heroic literature available from Babylon to Egypt, including such tales as the Epic of Gilgamesh, and the ancient Israelites would have likely known these stories.

Readers of the Bible will be quick to point out the obvious problems with the Israelites’ enjoying the epic tales of demigods’ slaying monsters—they glorify a pagan culture filled with a slew of gods and goddesses far removed from the one true holy God of Israel. And just as my eighth grade Bible teacher thought my deep love of Star Wars was going to lead me into witchcraft one day, the religious leaders of ancient Israel likely feared the stories of Gilgamesh and other demigods would lead the people into idolatry. Unlike my teacher, however, the leaders of Israel did not threaten school detention. Instead, they chose a much more diplomatic solution to the Israelites’ love of stories about epic heroes. They gave an orthodox explanation for them and wove them into the context of their own narrative.

Instead of denying the existence of famous heroes altogether, the author labels them “the fallen ones” and all but blames them for the utter depravity that fell upon the world and necessitated the flood. As to how they corrupted the world we can only guess, but the concept of “making a name for oneself” is clearly at odds with the worldview found within the pages of the Bible, specifically the Book of Genesis, and calls to mind the human pride and wickedness that began in the Garden of Eden. Just after the flood, in Babel (Babylon), a place with a long association with epic tales and legendary kings, human beings decided to band together and build a tower to heaven to make a name for themselves (Genesis 11:1–9).

Were they trying to create their own legends to cement themselves in history alongside the Nephilim? We can only speculate. What we do know is that it isn’t the son of a god or goddess that steps onto the biblical stage soon after the folly of Babel, but a childless man with no strength or glory to speak of. His gift is not the power given by his divine lineage, but a promise of a future for his descendants. And it is God, not the man, who gives him a new name that will be remembered throughout the generations—Abraham.

The legacy of the Nephilim did not end with the flood, however, as the biblical texts go on to attribute them as the ancestors of some of the Israelites’ most feared enemies (Numbers 13:33). Another feared group that was legendary by the time the Israelites settled the land was the Rephaim, who were known to be powerful giants (Deuteronomy 2:11, 20, 3:11; Joshua 12:4, 13:12). It’s unknown if the Israelites originally equated the Rephaim with the Nephilim, but it is clear that by the Intertestimental period (the fourth–first centuries B.C.E.) the Nephilim were thought to be the monstrous giant offspring of fallen angels and humans, as described in the pseudographical Book of Enoch and Jubilees, as well as others found among the Dead Sea Scrolls. The authors of the Greek Septuagint even chose to use the word gigantes in their translation of Genesis 6, a word that also invokes the monstrous Titans—the legendary giants that were destroyed by the gods in Greek myth. And like the Titans of old, the legend of the Nephilim only continues to grow in modern times.

To discover more about the “sons of God,” and learn of other interpretations, read Jaap Doedens’s full article “Exploring the Story of the Sons of God,” published in the Summer 2020 issue of Biblical Archaeology Review.

This story originally appeared in Bible History Daily in July, 2020

——————Subscribers: Read the full article, “Exploring the Story of the Sons of God,” by Jaap Doedens in the Summer 2020 issue of Biblical Archaeology Review.
Not a BAS Library or All-Access Member yet? Join today.

Read more in the BAS Library

When the Sons of God Cavorted with the Daughters of Men If someone asked you to name the origin of a story about gods who take human wives and then give birth to a race of semidivine heroes, you might answer: It’s a Greek myth, or perhaps a Norse legend, or maybe a folktale from Africa or India. Surely this story couldn’t come from the sacred scriptures of Judaism and Christianity. Or could it? In fact, it is one of the seldom-told stories in the Hebrew Bible.

Did Eve Fall or Was She Pushed? In the 1500s, a witch-hunting craze spread throughout Europe. Hundreds of thousands of women were accused of sorcery, tortured and executed. The witch craze, as it was known, was spurred by the publication of a guide to the identification—and elimination—of witches. Written for the Roman Catholic Church, this influential manual, called Malleus Maleficarum (Hammer Against Witches), traced the roots of witchery back to the first woman.

Hercules in Galilee So it was a year ago at our excavation of Hippos/Sussita overlooking the Sea of Galilee.a Our 2010 summer excavation season was followed by the torrential rains of an Israeli winter. Surveying a bathhouse from about 150 B.C.E. that we had been excavating, Nissim Mazig, director of the Sussita National Park, noticed a sculpted head sticking out of the muddy debris.

Adam Meets the Evil Archon The first world religion wasn’t Judaism, Christianity or Islam. It was Manichaeism. Today, even the name of this long-dead religion is unfamiliar. But its foundation story will not be—or at least not entirely. For here, Adam, Eve and the other beloved characters of Genesis are woven into an alien account of a primal battle between the Father of Greatness and the Sons of Darkness. Here, the biblical forefather Seth, the son of Adam and Eve, appears as the spiritual ancestor of Mani, the third-century C.E. Babylonian prophet who founded Manichaeism.