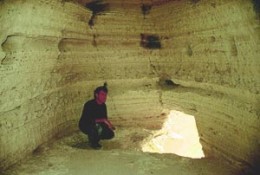 Should the original Hebrew Bible text be modified based on information obtained from the Dead Sea Scrolls?

This Bible History Daily feature was originally published in 2011.—Ed.

Inside Qumran Cave four, where 15,000 Dead Sea Scroll fragments from more than 580 documents were found. Many of the Biblical fragments from Cave 4 preserve readings that deviate from the standard readings of the Masoretic Text. To scholars, these variants are uniquely valuable because of their antiquity: The Dead Sea Scrolls are a thousand years older than our earliest complete edition of the Masoretic Text. Photo: Hershel Shanks.

Almost all of the known Dead Sea Scrolls have been transcribed, transliterated, translated and either published or nearly published. But as soon as this task is accomplished, scholars are faced with new challenges: Do insights from the scrolls add to the Masoretic text (known as the original Hebrew Bible text, or the Tanakh, which roughly corresponds to the Protestant Old Testament), and if so, should the original Hebrew Bible text be modified based this information?

Scholars from both sides of the divide weigh in on this issue below (see links below).

The Dead Sea Scrolls did not, as some early dreamers speculated, answer the age-old question: Where is the original Bible? Not, as it turns out, in the caves of Qumran. Nor do the scrolls include long lost books of the Bible. Furthermore, the scrolls did not utterly transform our image of the original Hebrew Bible text. Indeed, one of the most important contributions of the scrolls is that they have demonstrated the relative stability of the Masoretic text.

Nevertheless, there are differences (some quite significant) between the scrolls and the Masoretic text. Furthermore, these differences have made scholars rethink variant readings found in other ancient manuscripts. How should scholars treat these variants with relationship to the Masoretic text? Should they try to determine which readings are the most original and then incorporate them in a new critical edition of the Hebrew Bible? Or should they continue to use the Masoretic text as their base? Does a single version of the Hebrew Bible exist that is older than all others presently known, and if so, where is the original Bible? These questions are not merely academic; for any changes made to scholarly editions of the Masoretic text will have repercussions for decades of research and will affect all future Bible translations.

The Dead Sea Scrolls have been called the greatest manuscript find of all time. Visit the BAS Dead Sea Scrolls Page for dozens of articles on the scrolls’ significance, discovery and scholarship.

As is typical in the world of academics and research, there are scholars on each side of every argument. The case of using the Dead Sea Scrolls to modify the Masoretic text is no different. Ronald S. Hendel of the University of California, Berkeley, argues that scholars can reconstruct a more original Hebrew Bible text if they “combine the best from each tradition.” James A. Sanders, founder and president emeritus of the Ancient Biblical Manuscript Center in Claremont, California, responds by urging scholars to “keep each tradition separate.”

And as far as answering the question: Where is the original Bible (and whether such a thing even exists): We don’t know. But to all scholars and Biblical archaeologists we can offer this advice: Keep digging!

This Bible History Daily feature was originally published on July 20, 2011.