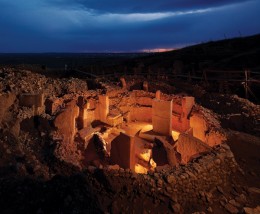 Is Turkey’s “Stonehenge” evidence of the oldest religion in the world?

The massive stone enclosures of the Göbekli Tepe ruins (known to many as Turkey’s “Stonehenge”) may be the earliest examples of Neolithic religion. What do the enclosures and the fascinating reliefs that adorn their pillars reveal about the oldest religion in the world? Photo: Vincent J. Musi/National Geographic Stock.

On a hill known as Göbekli Tepe (“Potbelly Hill”) in southeastern Turkey, excavations led by Klaus Schmidt uncovered several large megalithic enclosures that date between 10,000 and 8000 B.C.E., the dawn of civilization and the Neolithic age. Each of these circular enclosures, which many have described as Turkey’s “Stonehenge,” consists of 10 to 12 massive stone pillars surrounding two larger monoliths positioned in the middle of the structure. There are no village remains at or near the Göbekli Tepe ruins, suggesting that the unique site was a ceremonial center exclusively used for the practice of the Neolithic religion of local hunter-gatherer groups.

Given the early age of the site, equally surprising are the varied and often highly elaborate carvings that adorn the pillars of the Göbekli Tepe ruins. Among the pillars are detailed and often very realistic depictions of animal figures, including vultures and scorpions, lions, bulls, boars, foxes, gazelles, asses, snakes and other birds and reptiles. In addition, some of the massive monoliths are carved with stylized anthropomorphic details—including arms, legs and clothing—that give the impression of large super-human beings watching over the enclosures.

Our free eBook Ten Top Biblical Archaeology Discoveries brings together the exciting worlds of archaeology and the Bible! Learn the fascinating insights gained from artifacts and ruins, like the Pool of Siloam in Jerusalem, where the Gospel of John says Jesus miraculously restored the sight of the blind man, and the Tel Dan inscription—the first historical evidence of King David outside the Bible. 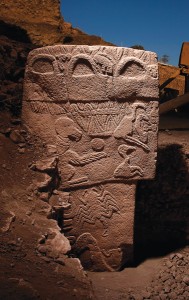 Despite the primitive age of the sanctuary at Göbekli Tepe, the carvings reflect a high level of artisanship depicting a plethora of animal figures in both low and high relief, including vultures and scorpions (shown here), lions, bulls, boars, foxes, gazelles, asses, snakes, other birds and reptiles. Photo: Vincent J. Musi/National Geographic Stock.

The Göbekli Tepe ruins and enclosures—the earliest monumental ritual sites of Neolithic religion and possibly the oldest religion in the world—are causing experts to rethink the origins of religion and human civilization. Until recently, scholars agreed that agriculture and human settlement in villages gave rise to religious practices. The discoveries at the Göbekli Tepe ruins, however, indicate that earlier hunter-gatherer groups that had not yet settled down had already developed complex religious ideas, together with monumental ceremonial sites to practice the sacred communal rituals of Neolithic religion.

Indeed, excavations at the Göbekli Tepe ruins uncovered tens of thousands of animal bones, indicating that many different species—including those depicted on the pillars—were slaughtered, sacrificed and presumably eaten at the site. While it is uncertain to whom these sacrifices were made, it’s possible they were offered to the enclosures’ stylized human pillars that, as some have suggested, may represent priests, deities or revered ancestors in Neolithic religion. Given that human bones were also been found, others believe the Göbekli Tepe ruins may have been a Neolithic burial ground where funerary rituals and perhaps even excarnations were practiced.*

To learn more about the Göbekli Tepe ruins and Neolithic religion, read Ben Witherington III’s article “In the Beginning: Religion at the Dawn of Civilization” as it appears in the January/February 2013 issue of Biblical Archaeology Review.

Our free eBook Ten Top Biblical Archaeology Discoveries brings together the exciting worlds of archaeology and the Bible! Learn the fascinating insights gained from artifacts and ruins, like the Pool of Siloam in Jerusalem, where the Gospel of John says Jesus miraculously restored the sight of the blind man, and the Tel Dan inscription—the first historical evidence of King David outside the Bible.

The Prehistoric Diet and the Rise of Complex Societies

No Matches? No Problem. Ancient Fire-Making in Israel

Çatalhöyük Mural: The Earliest Representation of a Volcanic Eruption?

Journey to the Copper Age: A Video Lecture by Thomas E. Levy

This Bible History Daily feature was originally published in December 2012.