Is it possible that the earliest existing picture of a scene from the Bible also includes the philosophers Socrates and Aristotle as onlookers? It is not only possible; I believe that is the case.

In the building known as the House of the Physician, excavators found a wall painting clearly depicting King Solomon seated on a raised tribunal and flanked by two counselors. As described in the Bible, two women have come to the Israelite monarch, each claiming to be the mother of the same infant. When Solomon orders the baby to be divided in half, the real mother, shown at the foot of the dais, pleads with him to spare the child and announces her willingness to relinquish her claim. The other woman is shown standing by the butcher block on which the infant has been placed. As a soldier raises an axe to do the king’s bidding, she seizes what she believes will be her portion, saying, according to the Biblical text, “Let it be neither mine, nor thine, but divide it.” It is obvious who the real mother is. The child is given to her unharmed as soldiers and observers look on, marveling at Solomon’s wisdom (1 Kings 3:16–28).

Pleading for her baby’s life, a woman kneels at the feet of King Solomon and relinquishes her claim to the contested child, thus identifying herself as the real mother of the infant in 1 Kings 3:16–28. Nearby a soldier prepares to follow the king’s order to cut the baby in two, while another woman, also claiming to be the mother, stands ready to take her half. This Roman wall painting from the House of the Physician in Pompeii is the earliest known depiction of a Biblical scene—a surprising find in a city better known for its brothels and erotic art than its religious paintings. So who was the person that commissioned this painting: a Jew, a Christian or a gentile? Photo: Scala/Art Resource, NY.

The wall painting has now been removed and is on exhibit at the Museo Nazionale in Naples. While it is therefore well known to scholars, it has not previously been noted that this is the earliest depiction of a full-fledged Biblical scene known to us!

Tracing the enigmatic, mystical genesis of the Greek Olympiad, The Olympic Games: How They All Began takes you on a journey to ancient Greece with some of the finest scholars of the ancient world. Ranging from the original religious significance of the games to the brutal athletic competitions, this free eBook paints a picture of the ancient sports world and its devoted fans.

Was the painting commissioned by a Jew, an early Christian, a so-called God-fearer (gentiles who adopted many Jewish customs and beliefs, but did not converta) or simply an educated Roman?

There is good evidence that Jews lived in Pompeii. Kosher brands of the locally popular fish sauces were packed there and appropriately labeled Kosher Garum and Kosher Muria (garum castum, muria casta).1 A two-word inscription, Sodoma Gomora, also survives from a house front in Pompeii and may have been written by a Jew or, less likely, by an early Christian, either before the eruption of Vesuvius or by a digger soon afterwards. It is perhaps more affecting to imagine its having been hastily written in the midst of the eruption by someone who analogized the town’s impending fate with that of the two doomed Biblical cities. 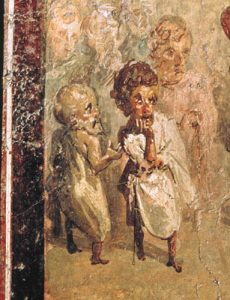 Wondering at the wisdom of King Solomon’s decision, two onlookers in the lower left corner of the painting observe the proceedings. Author Theodore Feder believes these clearly depicted figures represent the great Greek philosophers Socrates and Aristotle. With the creation of the Septuagint in the third century B.C., the Greek translation of the Hebrew Bible spread throughout the Greco-Roman world. The presence of these men in a Biblical scene suggests that the owner of this house was a gentile who wanted to draw a parallel between the Classical Greek sages and the wisdom of the Hebrew Bible. Photo: Alinari/Art Resource, NY

My own feeling, however, is that it is more likely that the painting of Solomon displaying his wisdom was commissioned by a non-Jew. True, the Second Commandment’s prohibition against depicting the human form was not always obeyed by Jews in the Roman era.2 But the injunction was particularly strong in the years leading up to the Jewish rebellion against Rome in 66 A.D., when protests against graven and painted images received a strong political as well as religious impetus. On stylistic grounds, the painting can be dated from the period immediately preceding the Vesuvius eruption in 79 A.D.

In any event, it is clear that the work reflects the influence of the Hebrew Bible. The Torah (the Pentateuch or Five Books of Moses) was translated into Greek beginning in about 270 B.C., and the rest of the Bible was added in the immediately following centuries. According to one account, King Ptolmey II Philadelphus of Egypt wanted a copy of the Hebrew Bible for his great library in Alexandria.b More likely, it was made by Jews for the Jews of Alexandria who did not know Hebrew. According to a traditional story, 70 scholars were isolated from each other on an island in Alexandria and instructed to prepare a Greek translation. When they were finished, all Greek copies were identical. Hence, this Greek translation of the Hebrew Bible is still known as the Septuagint.c The Greek translation became available not only to the many Greek-speaking Hellenized Jews of the Mediterranean world, but to non-Jews as well. This text served as both a literary and iconographic source-book for Jew and gentile alike. Although the owner of the House of the Physician could in theory have been either a Jew, a so-called God-fearer, an early Christian or a Roman gentile, he was most likely a gentile, based simply on demographic grounds. In short, gentiles were more numerous, more likely to attain wealth, and under no prohibition with regard to depicting the human form.

The painting contains all the essential narrative elements in the Biblical story without omissions or adumbrations. What’s more, it appears to have sprung whole from the artist’s imagination, as there is no known precedent in the history of art. As noted above, present are Solomon, the two mothers, the butcher block, the baby, the soldier waiting to divide it, and the onlookers who will attest to Solomon’s wisdom. The story has not received a more telling and cogent depiction in the 2,000 years since the painting’s creation.

Among the onlookers are two figures in the lower left corner of the composition who are more fully delineated than the very lightly sketched group of figures immediately behind them. The features and poses of these two witnesses reflect surprise, wonder and admiration.

I believe these two figures are stand-ins for Socrates and Aristotle, introduced as a way of associating the wisdom of Solomon with that of the Greek philosophers. Put another way, their presence in the composition attests to the respect Greek philosophy could accord to Hebrew wisdom. Such a juxtaposition in art of wise men from the two civilizations was unprecedented, has rarely been done since, and is of great cultural and historical significance.

In the DVD Beyond the Bible, you can join prominent archaeologists and Biblical scholars as they explore various sites, texts and concepts that help illuminate your understanding of the Bible.

The standing figure on the left has the bald head, flattened nose, and beard that almost always characterizes depictions of Socrates.

The figure to the right stands with his right leg thrust forward; his chin rests on his unsupported right arm in a classic thinker’s pose. He would be more natural if he were pictured seated. His features, however, correspond to a prototype for Aristotle: a full head of curly hair, little or no beard in this case and a regular profile. It is likely that the painter modeled Aristotle on a seated prototype derived from a Greek original that was copied in Roman times. A surviving example is the seated Aristotle from the Galleria Spada in Rome. There the pose is almost identical to the standing Aristotle of the Pompeian wall painting; the left leg is thrust forward and the head rests on an upraised arm which is in turn supported by Aristotle’s bent knee. 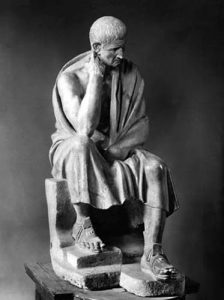 The Pompeian painter likely modeled his portrayal of the great philosopher Aristotle on an existing statue like this one but modified it to a standing position as seen in the completed painting. Scala/Art Resource, NY

The association of Jews with Greek wisdom and philosophy, though rare, was not entirely unknown in Hellenistic literature. In one of the earliest Greek references to the Jews, Clearchus of Soli (c. 300 B.C.), a disciple of Aristotle, quotes Aristotle as saying that the Jews are descended from Indian philosophers.3 In a similar vein, Theophrastus (372–288 B.C.) remarks that “being a race of philosophers, they converse with each other about divinity, and during the night they view the stars, turning their eyes to them and invoking their God with prayers.”4 This could serve as a still-accurate portrayal of synagogues in the modern era, where evening prayers (Maariv in Hebrew) are traditionally begun at sundown with the appearance of the first stars.

Numenius of Apamaea (Syria), a second-century A.D. Platonist, praised the Jews for worshiping an incorporeal God and declared that Plato had been but “a Moses in Attic garb,” here, too, making an association between the great thinkers of both cultures.5

The owner of the House of the Physician approved the depiction of this scene and likely proposed the subject matter to the painter. In selecting an episode from the Hebrew Bible, the patron departed from the canon of classical religious subject matter and elevated one from the Scriptures of a people whose influence at the time was spreading throughout the empire and would one day, in its Christian formulation, pervade it.

Theodore Feder is president and founder of Art Resource, the world’s largest photo archive of fine art, as well as president of the Artists Rights Society. He is author of Great Treasures of Pompeii and Herculaneum (Abbeville Press) and numerous articles.

The Split of Early Christianity and Judaism

Lovers’ Tale: A Closer Look at Daphnis and Chloe in the Garden of Eden

a. See Louis H. Feldman, “The Omnipresence of the God-Fearers”; Robert S. MacLennan and Thomas Kraabel, “The God-Fearers—A Literary and Theological Invention”; and Robert Tannenbaum, “Jews and God-Fearers in the Holy City of Aphrodite,” all in BAR, September/October 1986.

c. Philo of Alexandria gives a full account of its composition in his “Life of Moses” (2.6: 31–37, 44) See also Leonard J. Greenspoon, “Truth and Legend About the Creation of the Septuagint, the First Bible Translation,” Bible Review 05:04.