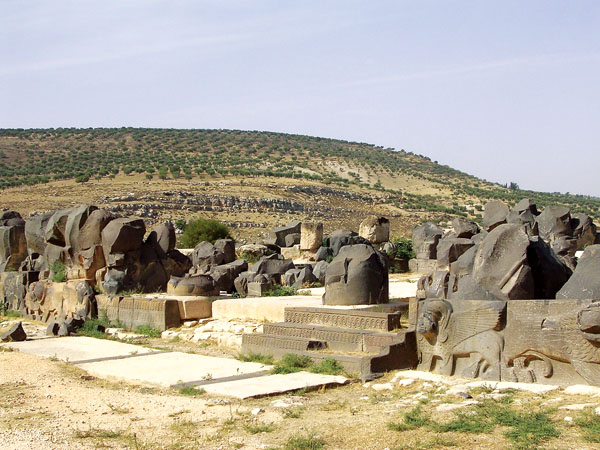 For centuries, scholars have searched in vain for any remnant of Solomon’s Temple. The fabled Jerusalem sanctuary, described in such exacting detail in 1 Kings 6, was no doubt one the most stunning achievements of King Solomon in the Bible, yet nothing of the building itself has been found because excavation on Jerusalem’s Temple Mount, site of the Temple of King Solomon, is impossible.

Fortunately, several Iron Age temples discovered throughout the Levant bear a striking resemblance to the Temple of King Solomon in the Bible. Through these remains, we gain extraordinary insight  into the architectural grandeur of the building that stood atop Jerusalem’s Temple Mount nearly 3,000 years ago.

The black basalt ruins of the Iron Age temple discovered at ’Ain Dara in northern Syria offer the closest known parallel to the Temple of King Solomon in the Bible. Photo: Ben Churcher.

As reported by archaeologist John Monson in the pages of BAR, the closest known parallel to the Temple of King Solomon is the ’Ain Dara temple in northern Syria. Nearly every aspect of the ’Ain Dara temple—its age, its size, its plan, its decoration—parallels the vivid description of the Temple of King Solomon in the Bible. In fact, Monson identified more than 30 architectural and decorative elements shared by the ’Ain Dara structure and the Jerusalem Temple described by the Biblical writers.

From Babylon to Baghdad: Ancient Iraq and the Modern West examines the relationship between ancient Iraq and the origins of modern Western society. This free eBook details some of the ways in which ancient Near Eastern civilizations have impressed themselves on Western culture and chronicles the present-day fight to preserve Iraq’s cultural heritage.

The similarities between the ’Ain Dara temple and the temple described in the Bible are indeed striking. Both buildings were erected on huge artificial platforms built on the highest point in their respective cities. The buildings likewise have similar tripartite plans: an entry porch supported by two columns, a main sanctuary hall (the hall of the ’Ain Dara temple is divided between an antechamber and a main chamber) and then, behind a partition, an elevated shrine, or Holy of Holies. They were also both flanked on three of their sides by a series of multistoried rooms and chambers that served various functions.

Even the decorative schemes of ’Ain Dara temple and the temple described in the Bible are similar: Nearly every surface, both interior and exterior, of the ’Ain Dara temple was carved with lions, mythical animals (cherubim and sphinxes), and floral and geometric patterns, the same imagery that, according to 1 Kings 6:29, adorned the Temple of King Solomon in the Bible.

It is the date of the ’Ain Dara temple, however, that offers the most compelling evidence for the authenticity of the Biblical Temple of King Solomon. The ’Ain Dara temple was originally built around 1300 B.C. and remained in use for more than 550 years, until 740 B.C. The plan and decoration of such majestic temples no doubt inspired the Phoenician engineers and craftsmen who built Solomon’s grand edifice in the tenth century B.C. As noted by Lawrence Stager of Harvard University, the existence of the ’Ain Dara temple proves that the Biblical description of Solomon’s Temple was “neither an anachronistic account based on later temple archetypes nor a literary creation. The plan, size, date and architectural details fit squarely into the tradition of sacred architecture from north Syria (and probably Phoenicia) from the tenth to eighth centuries B.C.” 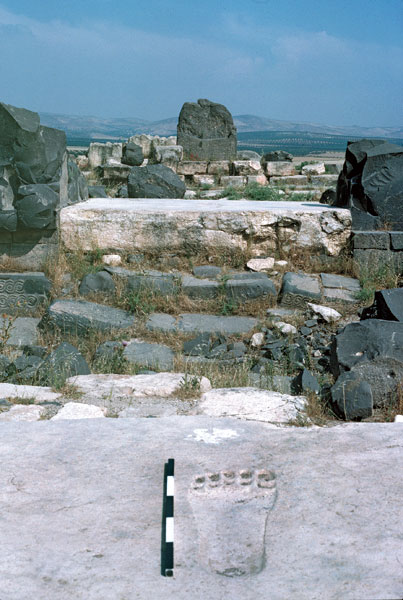 Gigantic footprints belonging to the resident deity were carved at the temple’s entrance. Photo: A.M. Appa.

Certain features of the ’Ain Dara temple also provide dramatic insight into ancient Near Eastern conceptions of gods and the temples in which they were thought to reside. Carved side-by-side in the threshold of the ’Ain Dara temple are two gigantic footprints. As one enters the antechamber of the sanctuary, there is another carving of a right foot, followed 30 feet away (at the threshold between the antechamber and the main chamber) by a carving of a left foot. The footprints, each of which measures 3 feet in length, were intended to show the presence (and enormity) of the resident deity as he or she entered the temple and approached his or her throne in the Holy of Holies. Indeed, the 30-foot stride between the oversize footprints indicates a god who would have stood 65 feet tall! In Solomon’s Temple, the presence of a massive throne formed by the wings of two giant cherubim with 17-foot wingspans (1 Kings 6:23–26) may indicate that some Israelites envisaged their God, Yahweh, in a similar manner.

Lavishly illustrated with hundreds of colorful images and charts, Solomon’s Temple and Palace: New Archaeological Discoveries by Yosef Garfinkel and Madeleine Mumcuoglu provides a new understanding of the Biblical texts, allowing a new representation of Solomon’s Temple and palace as they have never been seen before.

Special Report: Current Status of the Tell Ain Dara Temple Between January 20–22, 2018, the early Iron Age temple at Tell Ain Dara in Syria—considered to be a close parallel to the Temple of Solomon—suffered large-scale damage. Read a special report by ASOR’s Cultural Heritage Initiatives that documents the damage.

The Doorways of Solomon’s Temple In the Bible, the inner shrine of Solomon’s Temple is described as having five mezuzot. What are they? The question has puzzled Biblical scholars for centuries. Does a recently discovered shrine model from Khirbet Qeiyafa hold the answer?

Tarshish: Hacksilber Hoards Pinpoint Solomon’s Silver Source What is the location of Tarshish, the Biblical source of the Phoenician silver trade? A Hacksilber Project study points to Spain and Sardinia as the Biblical world’s source of silver in the 10th century B.C.E., lending scientific credence to textual associations between Biblical Tarshish and modern Sardinia.

This Bible History Daily article was originally published in October 2013.