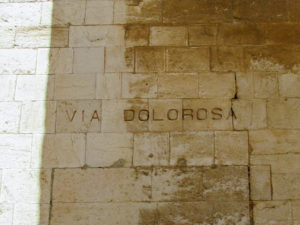 OnSite: The Via Dolorosa

According to many Christian traditions, the Via Dolorosa (Latin for the “Way of Suffering”) marks the processional route taken by Jesus of Nazareth on his way to be crucified. Although the route was first mentioned in the records of Byzantine pilgrims, the modern route was only established in the 18th century. Over the years, the Via Dolorosa has shifted numerous times, as the city around it has transformed and control of the city’s Christian holy sites passed from faction to faction. Beginning at the Antonia Fortress, the path winds its way to the Church of the Holy Sepulchre, a journey of roughly 2,000 feet. The current route consists of 14 stations, marking various locations along Jesus’s journey. Nine of the stations lie along the way to the Sepulchre, while the final five are within the Holy Sepulchre itself. Not only is the Via Dolorosa an important pilgrimage destination for Christians, but its winding history also sheds light on the ways that the city itself has evolved over the last 2,000 years.

Explore this wonder for yourself with this short video tour of the Via Dolorosa, led by Biblical Archaeology Review assistant editor Nathan Steinmeyer. 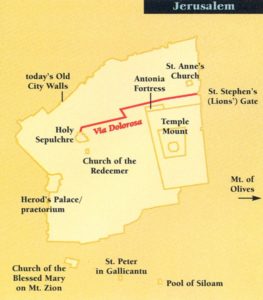 The earliest references to the Via Dolorosa come from the records of Christian pilgrims who visited Jerusalem towards the end of the Byzantine period. During this time, the processional route began on the Mount of Olives, where pilgrims would make their way from the Eleona Church to Gethsemane, and then into the city via St. Stephen’s Gate (modern Lions’ Gate). Once inside the city, the route followed a very similar path to the route used today, although there were no formal stops or stations until one reached the Holy Sepulchre.1

By the eighth century, the processional route had changed. Instead of traveling straight from Gethsemane to the Holy Sepulchre, pilgrims would instead go around the city to the south. The route then led to the house of Caiaphas, located near the Temple Mount/Noble Sanctuary, before heading to Calvary. Eventually, control over Jerusalem’s Christian sites was divided between various Catholic factions. This meant that competing routes for the Via Dolorosa emerged, each taking pilgrims past holy sites controlled by one or another Christian faction. 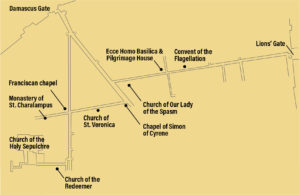 This situation would come to an end in the 14th century, when Pope Clement VI declared the Holy Land to be under the custody of the Franciscan order. At this time, the Franciscan route ran from their monastery on Mount Zion to the Holy Sepulchre. After this, the route led back out through Lions’ Gate to Gethsemane and finally back to Mount Zion. It was not until the early 16th century that the path would change once again to reflect the general sequence of events related to Jesus’s final walk and crucifixion. Over the centuries of Franciscan control of the Via Dolorosa, stations have gradually developed, often with disagreement on the number or location of specific stations. Finally, in the 18th century, the route and most stations received their modern form, although some stations were not finalized until a century later. 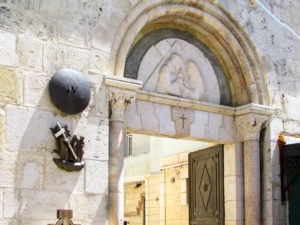 Entrance to the Church of Our Lady of the Spasm. Courtesy Nathan Steinmeyer.

The Path of Jesus?

Although the Via Dolorosa has been in use for more than a thousand years, many biblical scholars and historians doubt that the modern route follows the path described by the Gospels. As discussed, Christian tradition has shifted the route several times over its history. Beyond the modern disagreement on the true burial place of Jesus of Nazareth, many scholars have also argued that Jesus would not have been tried and sentenced at the Antonia Fortress. Instead, it is more likely that such an event would have taken place at Herod’s Palace, located near the present Tower of David to the west of the Holy Sepulchre. 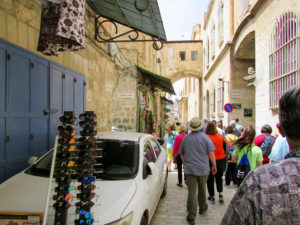 Walking along the Via Dolorosa. Courtesy Nathan Steinmeyer.

OnSite: The Walls of Jerusalem

A Look Inside the Antonia

Does the Holy Sepulchre Church Mark the Burial of Jesus?