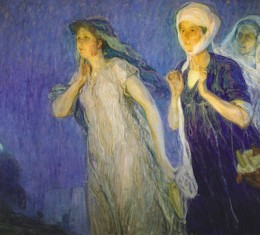 One of the problems in reading ancient texts like the Bible in the 21st century is the danger of anachronism—by which I mean bringing unhelpful modern ideas and expectations to our readings. This problem becomes all the more acute when dealing with ancient texts on which much historical import hinges.

On what day did Jesus rise? On Easter morning, Mary Magdalene, Mary the mother of James and Salome came to Jesus’ tomb to anoint his body (Mark 16:1–2), as depicted here in Henry Osawa Tanner’s “The Three Marys” (1910). Photo: Fisk University Galleries, Nashville, Tennessee.

For example, we are a people obsessed with time—and with exactness when it comes to time—down to the nanosecond. In this regard, we are very different from the ancients, who did not go around wearing little sundials on their wrists and did not talk about seconds and minutes. They did not obsess about precision when it comes to time.

Take a few examples from the Gospels that may help us read the stories about Jesus’ last week of life with more insight.

Some texts tell us that Jesus predicted he would rise “after three days.” Others say he would rise “on the third day.” In Matthew 12:40 Jesus mentions, “three days and three nights,” but this is just part of a general analogy with the story of what happened with Jonah and the whale, and as such the time reference shouldn’t be pressed. Jesus is just saying, “It will be like the experience of Jonah.”

On the other hand, in Mark 8:31 Jesus says, “The Son of Man will rise again after three days.” He mentions the same event in John 2:19 as “in three days,” and on various occasions the Gospel writers tell us Jesus used the phrase “on the third day” (see, e.g., Matthew 16:21; 17:23; 20:19; Luke 24:46). On the face of it, this might seem to involve a flat contradiction. While both predictions could be wrong, is it really possible both could be right?

The problem with this sort of modern reasoning is that it assumes the Gospel writers intended always to write with precision on this matter. In fact the phrase “after three days” in the New Testament can simply mean “after a while” or “after a few days” without any clear specificity beyond suggesting several days, in this case parts of three days, would be involved. In fact, the Hebrew Bible provides us with some clues about these sorts of differences. Second Chronicles 10:5, 12 clearly says, “Come to me again after three days … So … all the people came to Rehoboam on the third day because the king had said ‘Come to me again the third day.’” Apparently “after three days” means the very same thing as “on the third day” in this text. Is this just carelessness, or is it in fact an example of typical imprecision when it comes to speaking about time? I would suggest that the phrase “after three days” is a more general or imprecise way of speaking, whereas “on the third day” is somewhat more specific (though it still doesn’t tell us when on the third day). These texts were not written to meet our modern exacting standards when it comes to time.

One of the keys to interpreting the time references in the New Testament is being aware that most of the time, the time references are not precise, and we must allow the ancient author to be general when he wants to be general and more specific when he wants to be more specific. Especially when you have both sorts of references to the time span between Jesus’ death and resurrection in one book by one author, and indeed sometimes even within close proximity to each other, one should take the hint that these texts were not written according to our modern exacting expectations when it comes to time references.

Isn’t it about time we let these authors use language, including time language, in the way that was customary in their own era? I would suggest it’s high time we showed these ancient authors the respect they deserve and read them with an awareness of the conventions they followed when writing ancient history or ancient biography and not impose our later genre conventions on them.1

Ben Witherington III is the Amos Professor of New Testament for Doctoral Studies at Asbury Theological Seminary in Kentucky and on the doctoral faculty at St. Andrews University, Scotland.

1. For help with understanding how to read the Bible in light of its original contexts, see Ben Witherington III, Reading and Understanding the Bible (Oxford: Oxford Univ. Press, 2014).

When Was the First Communion?

How Was Jesus’ Tomb Sealed?