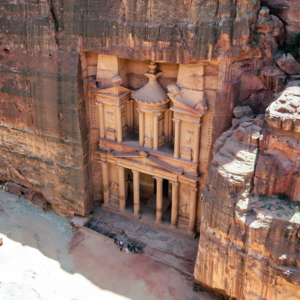 For more than six centuries, the ancient spice trade route passed through much of the Arabian Peninsula and beyond. Centered on the Nabatean city of Petra, this trade route helped connect the ancient world through a process of pre-modern globalization. A new study, published in the journal Antiquity, examines the lesser-known stops and waystations on this ancient desert highway to better understand the products it carried and the traders who traveled it. Most surprisingly, excavations at three such sites in Israel’s Negev Desert have shown that the trade was not as unidirectional as once believed. 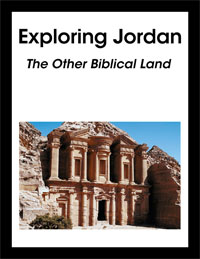 The ancient spice road flourished from the third century B.C.E. to the third century C.E. and was the main trade corridor connecting South Arabia (modern Yemen) with the Mediterranean coast. The route enabled the trade of valuable spices and aromatics such as frankincense and myrrh. Many of the route’s roads and branches passed through the Nabatean capital of Petra and, from there, continued west towards Gaza and north towards Damascus, Palmyra, and other large cities in Syria and Mesopotamia. 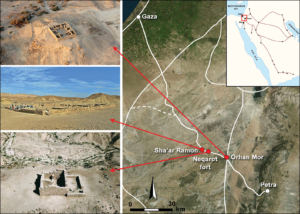 Major Roman-era trade routes through the Negev, with locations and photos of excavated waystations. Photos by Roy Galili. 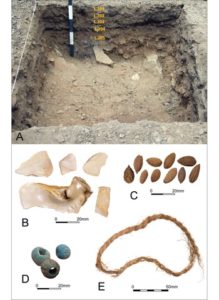 Some of the excavated finds from Sha’ar Rimon, including oysters, olive pits, faience beads, and date-palm cordage. Photos by Nofar Shamir.

Until recently most scholars believed this trade route was largely unidirectional, with spices and exotic goods flowing mainly towards the Mediterranean. However, as suggested by the recent study, the real story is much more complex. While excavating middens (rubbish dumps) at three separate waystations along the route, the team uncovered a number of unexpected trade goods. According to Guy Bar-Oz, one of the authors of the study, in a recent interview with The Times of Israel, “The most surprising finds were materials that originated from the west, i.e., the Mediterranean Sea and the Nile.”

Among the discovered materials were the remains of fish and shellfish, as well as grapes, olives, pomegranates, and peaches. The team also uncovered large amounts of Roman glassware, which the merchants were likely transporting back to Petra and beyond. According to the team, “The diversity of goods presented here offers an original contribution by illustrating the flow of commodities, to show that trade was conducted in both directions and that it connected distant economic and cultural institutions.”

Waystations in the Negev

The ancient spice road—and the central role of Petra and the Nabatean kingdom in the trade—is well attested in classical sources. All along the route were waystations, cisterns, and watchtowers that provided travelers with food, water, shelter, and security. Such features improved the facilities along this harsh and difficult route and facilitated an ever-increasing volume of traffic and goods across very long distances. According to Pliny the Elder (Natural History 12.32.63–65), who wrote during the first century C.E., the journey from South Arabia to Gaza took roughly 62 days.

Despite the many classical references to the trade route, little has been uncovered about the material culture of the people who utilized these roads. To examine this question, the team set out to excavate three waystations (or caravanserai) located in the Negev Desert, along roads connecting Petra with the Mediterranean port of Gaza to the west and the Red Sea port of Aqaba (ancient Ayla) to the south. The excavations were pilot studies for a more extensive, multi-national project to examine the materials left behind by these long-distance traders. 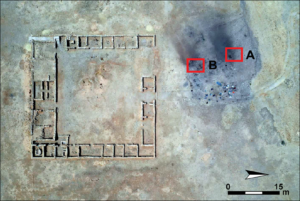 Aerial view of the Nabatean–Roman (first to second century C.E.) site of Sha’ar-Ramon, with location of excavations marked. Photo by Roy Galili.

The three excavated sites were Orhan-Mor, Neqarot, and Sha’ar-Rimon. Specifically, the team focused on trash heaps as a way of studying what the traders carried with them by analyzing the traces of what they left behind. The sites ranged in size but all were abandoned in the third century, following the gradual demise of the overland spice trade through Arabia. All three sites revealed large quantities of floral and faunal remains, distinctive Nabatean painted ceramics, as well as evidence for grains, livestock, and wild animals that may have been hunted for food.

Solving the Enigma of Petra and the Nabataeans

Cyprus—Trade Emporium of the Ancient World

When People Lived at Petra
Not a BAS Library or All-Access Member yet? Join today.