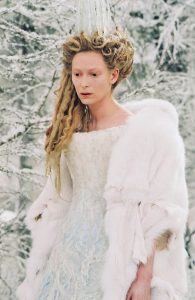 Connections between Lilith, Adam’s first wife, and Jadis, the White Witch of Narnia

C.S. Lewis, one of the most beloved authors of the 20th century, created a magical, fictional world called Narnia. The primary villain of the first book of this series, The Lion, the Witch, and the Wardrobe, is Jadis, the White Witch. Below is the character Edmund’s description of the White Witch when he first meets her:

A great lady, taller than any woman that Edmund had ever seen. She also was covered in white fur up to her throat and held a long straight golden wand in her right hand and wore a golden crown on her head. Her face was white—not merely pale, but white like snow or paper or icing-sugar, except for her very red mouth. It was a beautiful face in other respects, but proud and cold and stern.
(The Lion, the Witch, and the Wardrobe)

Jadis, the White Witch, is beautiful—and terrifying. Although she looks like a human, she is not. According to the character Mr. Beaver, the White Witch was descended from Lilith, Adam’s first wife, on one side and from giants on the other.

Who is Lilith? Is there any warrant for calling Lilith Adam’s first wife, or is this just the baseless chatter of woodland creatures? Are there appearances of Lilith in the Bible?

Dan Ben-Amos, Professor of Folklore and Asian and Middle Eastern Studies at the University of Pennsylvania, explores the figure of Lilith in the Bible and mythology in his article “From Eden to Ednah—Lilith in the Garden” in the May/June 2016 issue of Biblical Archaeology Review. His analysis shows that Lilith is an intriguing figure who has taken on many shapes over the millennia. From this, we see that Jadis, the White Witch, shares more than just lineage with her supposed ancestor. 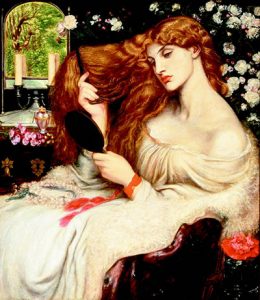 Who is Lilith: Beauty or horror? English painter Dante Gabriel Rossetti’s Lady Lilith (1866–68; altered 1872–73) depicts Lilith, Adam’s first wife, as a beautiful woman. Who is Lilith? According to Rossetti’s interpretation, she was a beauty. Photo: Delaware Art Museum

Lilith is first mentioned in ancient Babylonian texts as a class of winged female demons that attacks pregnant women and infants. From Babylonia, the legend of “the lilith” spread to ancient Anatolia, Syria, Israel, Egypt and Greece. In this guise—as a wilderness demoness—she appears in Isaiah 34:14 among a list of nocturnal creatures who will haunt the destroyed Kingdom of Edom. This is her only mention in the Bible, but her legend continued to grow in ancient Judaism.

During the Middle Ages, Jewish sources began to claim her as Adam’s first—and terrifying—wife. How did Lilith evolve from being a wilderness demoness to Adam’s first wife?

Interestingly enough, this story begins at the beginning—in Genesis 1.

The creation of humans is described in Genesis 1 and in Genesis 2. The first account is fairly straightforward: “So God created humankind in his image, in the image of God he created them; male and female he created them” (Genesis 1:27). The second account describes how God formed man out of the dust of the ground and then creates woman from the man: “Then the Lord God formed man from the dust of the ground, and breathed into his nostrils the breath of life; and the man became a living being. … So the Lord God caused a deep sleep to fall upon the man, and he slept; then he took one of his ribs and closed up its place with flesh. And the rib that the Lord God had taken from the man he made into a woman and brought her to the man” (Genesis 2:7, 21–22).

In the post-Biblical period, some ancient Jewish scholars took the stance that Genesis 1:27 and Genesis 2:21–22 must describe two separate events, since it appears that woman is created differently in these accounts. In her Bible Review article “Lilith” in the October 2001 issue, Professor Janet Howe Gaines explains this reasoning: “Considering every word of the Bible to be accurate and sacred, commentators needed a midrash or story to explain the disparity in the creation narratives of Genesis 1 and 2. God creates woman twice—once with man, once from man’s rib—so there must have been two women. The Bible names the second woman Eve; Lilith was identified as the first in order to complete the story.” Accordingly, Genesis 1:27 describes the creation of Adam and an unnamed woman (Lilith); Genesis 2:7 gives more details of Adam’s creation; and Genesis 2:21–22 describes the creation of Eve from Adam. 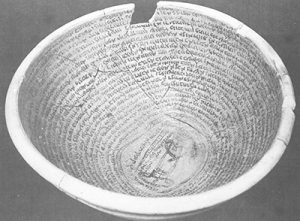 Who is Lilith: Beauty or horror? This Aramaic incantation bowl depicts Lilith as a demoness. A text that mentions Lilith and other evil spirits is written on the inside of the bowl in spiral concentric circles. Incantation bowls were meant to both capture and repel evil spirits. Who is Lilith? According to this representation, which is more consistent with the appearance of “the lilith” in the Bible, she was a horror. Photo: Courtesy V. Klagsbald, Jerusalem

Lilith’s creation is recounted in The Tales of Ben Sira, an apocryphal work from the tenth century C.E. Dan Ben-Amos explains that although this is the first extant text that records the legend of Lilith, her story probably existed earlier:

[Lilith’s] story seems to hover at the edges of literacy with sporadic references. … [I]n the post-Biblical period, the sages identify the lilith several times, not by name, but as “the First Eve,” indicating that her full story was well known in oral tradition, yet barred from the canonized Biblical text. Finally, in the tenth century C.E. in Babylon, an anonymous writer, who was not bound by normative traditional principles and who included in his book some other sexually explicit tales, spelled out the lilith’s adventures in paradise.

The Tales of Ben Sira relates that God created Lilith from the earth, just as he had created Adam. They immediately began fighting because neither would submit to the other. Recognizing that Adam would not listen to her, Lilith “pronounced the Ineffable Name and flew away into the air” (The Tales of Ben Sira). The angels Snvi, Snsvi and Smnglof were sent to pursue Lilith, but when they reached her, she refused to return with them to the Garden of Eden. “‘Leave me!’ she said. ‘I was created only to cause sickness to infants. If the infant is male, I have dominion over him for eight days after his birth, and if female, for twenty days’” (The Tales of Ben Sira). As a compromise, she promised that whenever she saw the angels’ names or forms on amulets, she would leave the child alone. She also agreed that 100 of her children—demons—would die every day.

Janet Howe Gaines expounds the severity of Lilith’s sin and its consequences as described in the The Tales of Ben Sira:

Lilith sins by impudently uttering the sacred syllables, thereby demonstrating to a medieval audience her unworthiness to reside in Paradise. So Lilith flies away, having gained power to do so by pronouncing God’s avowed name. Though made of the earth, she is not earthbound. Her dramatic departure reestablishes for a new generation Lilith’s supernatural character as a winged devil.

Gaines also explains Lilith’s hatred for human babies: “Ben Sira’s story suggests that Lilith is driven to kill babies in retaliation for Adam’s mistreatment and God’s insistence on slaying 100 of her progeny daily.”

To learn more about Biblical women with slighted traditions, take a look at the Bible History Daily feature Scandalous Women in the Bible, which includes articles on Lilith, Mary Magdalene and Jezebel.

The Lilith legend continued to grow and change over the following centuries, which is reflected in various artistic depictions of her. While some portrayed Lilith as a beautiful woman, others showed her in a more sinister light. Some even depicted her as the serpent in the Garden of Eden who convinced Eve to eat the forbidden fruit.

Jadis, the White Witch of Narnia, shares similarities with Lilith. Not only are both of them strong, terrifying women, but they also seem bent on destroying human life. Both wield dark magic and are immortal beings. As revealed in C.W. Lewis’s The Magician’s Nephew, Jadis gains immortality by eating a silver apple inside a walled garden in Narnia. This episode has some obvious connections to the account of the Garden of Eden in the Bible. Additionally, both pronounce an ineffable word and suffer dire consequences as a result. The Magician’s Nephew tells how Jadis—before she became the White Witch—pronounced the Deplorable Word, which killed every living thing in her world, Charn, except for herself. So great was her desire for power and her refusal to submit, she spoke the Deplorable Word—knowing full well that it would kill every living person and thing in her world—rather than surrender her claim to the throne of Charn. These examples demonstrate that the character Jadis bears both the blood and the character of her foremother Lilith.

From demoness to Adam’s first wife, Lilith is a terrifying force. To learn more about Lilith in the Bible and mythology, read Dan Ben-Amos’s full article—“From Eden to Ednah—Lilith in the Garden”—in the May/June 2016 issue of Biblical Archaeology Review.

——————
BAS Library Members: Read the full article “From Eden to Ednah—Lilith in the Garden” by Dan Ben-Amos in the May/June 2016 issue of Biblical Archaeology Review.

This Bible History Daily feature was originally published on May 2, 2016.

The Adam and Eve Story: Eve Came From Where?
Ziony Zevit argues that Eve wasn’t made from Adam’s rib—but from his baculum

How the Serpent Became Satan
Shawna Dolansky examines Adam, Eve and the serpent in the Garden of Eden