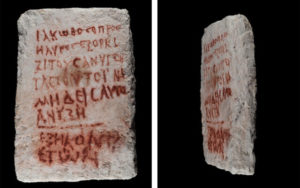 “Jacob the convert swears upon himself that any who open this grave will be cursed.” Thus reads a gravestone discovered in the ancient necropolis of Beit She’arim in the lower Galilee. Although hundreds of gravestones have been discovered at the UNESCO World Heritage Site of Beit She’arim, this was the first discovered in more than six decades. The study of the inscription was carried out by the University of Haifa and the Israel Antiquities Authority (Hebrew). Beyond its intriguing curse, the inscription is remarkable for another reason: It explicitly mentions that the owner of the grave was a convert to Judaism.

The gravestone of Jacob the convert dates to the very end of the Roman period (37 B.C.E.–324 C.E.), when Jews had been expelled from Jerusalem. By that time, the Galilee had become the main center for Jewish life and culture within Roman Palestine. However, as indicated by his inscription, Jacob was not born Jewish, nor was he likely from the Galilee region.

“Who knows where he [Jacob] came from. And we will never know unless we find his diary, which we won’t,” said Jonathan Price, a University of Tel Aviv professor who translated the inscription, in an interview with The Times of Israel. Wherever Jacob originated, it is not surprising that he was buried in the Galilee, as Beit She’arim had become an important necropolis where many Jews from Israel and the Diaspora were buried. The cemetery is also believed to be the final resting place of the important second-century Rabbi Judah ha-Nasi, who is credited with redacting the Mishnah as well as being the leader of the Sanhedrin.

According to Price, Jacob likely composed the curse inscription himself before his death, a common practice in antiquity. The inscription is written in what Price described as “odd” Greek. “That’s how he spoke, apparently.” Following the curse, the words “aged 60” were written, likely by his family once he had died.

The discovery of this gravestone is interesting as it is one of only a few such inscriptions from the late Roman period that mentions converts to Judaism. “Despite the decline of Judea, and after a number of failed Jewish revolts and the strengthening of Christianity and its spread in the empire, we see that there are still people who choose to join the Jewish religion and even proudly declare it,” said excavation director Adi Erlich to The Times of Israel.

Besides converts, Judaism also attracted a second group of adherents during the late Roman period. This group, known as “Godfearers,” revered the Israelite god and often donated money for the building of synagogues. Unlike converts, however, this group did not become fully Jewish, by adhering to the law or becoming circumcised. Such Godfearers are also frequently mentioned in the New Testament, and in some cases were key to the formation of early Christian churches. The Centurion Cornelius, in Caesarea, is one such example (Acts 10).