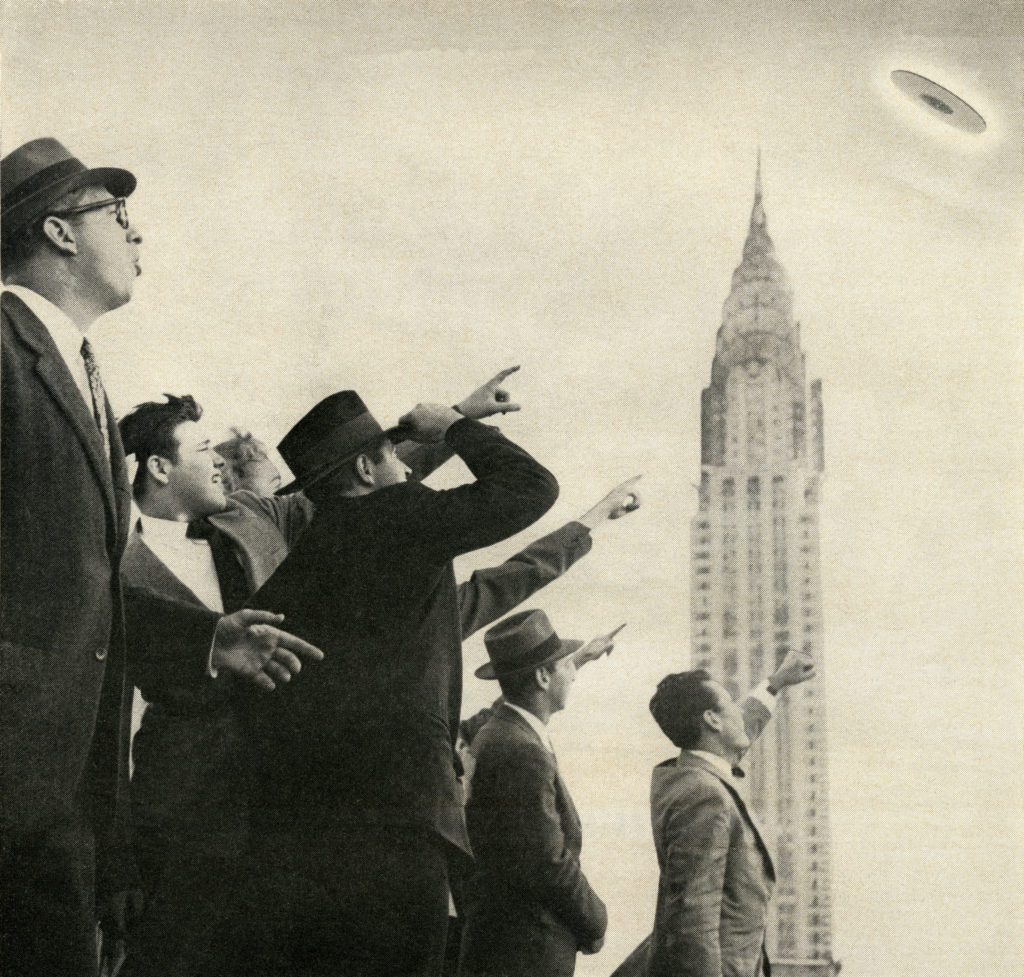 Are we alone? Are we living in a real “Twilight Zone?”

Up until recently, UFO chasers and alien enthusiasts may have received a polite nod from their fellow man followed by a swift shuffle away.

However, ufologists suddenly enjoyed newfound legitimacy in 2017 when news broke about the existence of a secret Pentagon program to examine sightings of unexplained aircraft and phenomena. The Pentagon itself later verified several videos that came from the U.S. Navy, showing objects moving at high clips with remarkable, seemingly impossible even, agility.

In August 2021, former president Barack Obama further stoked the speculation that we are not, in fact, alone, during an appearance on the “The Late Late Show with James Corden” on CBS.

“What is true, and I’m actually being serious here, is that there is footage and records of objects in the skies that we don’t know exactly what they are,” Obama said.”

What we do know, however, is that they aren’t American made.

Today, for the first time since 1969, a congressional hearing is being publicly held on the topic of UFOs, and while the military’s 2021 report concluded that no evidence of aliens had been found — yet — the report also said that there are incidents that simply cannot be explained.

So, is it a balloon? Is it a plane? Is it Russian or Chinese hypersonic missile programs? Here are three far out historical sightings that have yet to be identified:

The skies over Mineral, Washington, were clear on June 24, 1947, as amateur pilot, Kenneth Arnold, flew his CallAir A-2 plane. He had hoped to poke around Mount Rainer before making his way to an air show in Oregon — a Marine Corps C-46 transport plane had recently crashed in the area, and there was a $5,000 reward to anyone who found the wreckage.

On that day, Arnold got more than he bargained for.

In what he later described in Ted Bloecher’s “Report on the UFO Wave of 1947,” released in 1967, Arnold was nearly blinded by as a series of flashes — nine, to be exact — in rapid succession.

The pilot then witnessed, according to The Atlantic, “a diagonally stepped-down, echelon formation,” with the entire assemblage “stretched out over a distance that he later calculated to be five miles.” The objects seemed to be flying on a single, horizontal plane, but they also weaved from side to side, occasionally flipping and banking — darting around, Arnold would say, like “the tail of a Chinese kite.” They moved in unison, Arnold said. They didn’t seem to be piloted, he reported.

Shaken, Arnold landed in Yakima, Washington, detailing to friends and acquaintances the “unidentified flying objects” that flew “like a saucer if you skip it across the water.”

Arnold’s report skipped right across the water and into the homes of Americans, where “UFO” became part of the vernacular.

It was a crisp fall day when the aliens came to town — or so 10,000 fans of the Italian soccer clubs Fiorentina and Pistoiese later claimed. As the local rivals took the field after the half the stadium fell eerily silent

“I remember everything from A to Z,” Pistoiese player Ardico Magnini later recalled. “It was something that looked like an egg that was moving slowly, slowly, slowly. Everyone was looking up, and also there was some glitter coming down from the sky, silver glitter.”

Play was suspended as the fans and players halted, disbelief crossing the faces of many.

“They were moving very fast and then they just stopped. It all lasted a couple of minutes. I would like to describe them as being like Cuban cigars. They just reminded me of Cuban cigars, in the way they looked,” Fiorentina fan Gigi Boni recounted to a local newspaper.

The “glitter” easily disintegrated on contact, but one enterprising journalist, Giorgio Batini took a chance by rolling up several samples on a matchstick. Using that, the Institute of Chemical Analysis at the University of Florence later determined that the material contained elements of boron, silicon, calcium and magnesium – but that it was not radioactive.

Friends in the Sky? The Charlie Redstar Sightings

Sightings in Manitoba may be older than the province itself, according to CBC News.

Over 2,000 sightings of unidentified objects have been reported in the area since 1792. That’s the year explorers David Thompson and Andrew Davy were hiking in northern Manitoba when, according to Thompson’s diary entry, the two men witnessed “meteors” crash into the ice. The explorer noted how the two were surprised one night by a brilliant “meteor of globular form” that “appeared” larger than the moon.”

“It struck the river ice, with a sound like a mass of jelly, was dashed into innumerable luminous pieces and instantly expired,” Thompson wrote. “The next morning we went to see what marks this meteor had made on the ice, but could not discover that a single particle was marked.”

In 1975, hundreds of civilians in the Manitoba region once again reported seeing a “glowing red-orange object soar through the sky every night for several months,” according to Newsweek. People observed that the object was “mischievous” and “playful,” in a way that only a glowing red-orange object can be. The UFO was lovingly dubbed “Charlie Redstar” by the Manitobans.