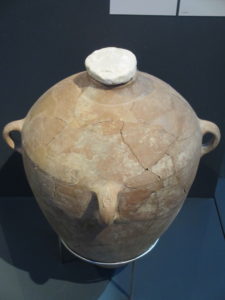 A restored lmlk storage jar from the Kingdom of Judah. Impressed with the phrase lmlk—meaning “belonging to the king”—such royally administered storage jars were used to distribute military rations, collect taxes, or support the kingdom in times of war.
Credit: Chamberi, CC BY-SA 3.0 , via Wikimedia Commons.

Sustainability is something we hear about a lot these days. New items are developed every day to help reduce waste in our daily lives. One area that has long been sustainable is food storage. Earl Tupper created his first storage container in 1942; a few years later, Tupperware became a household name. Mr. Tupper’s idea, however, wasn’t entirely new.

Across the millennia, people and cultures from all over the world, including in ancient Israel and Judah, have been using reusable containers—mostly pottery—to store and keep food. As Tim Frank explains in “Storage and Staples in Biblical Israel” in the Spring 2022 issue of Biblical Archaeology Review, archaeologists can study Israelite pottery and other material evidence to learn how the average person managed issues of food preparation and storage.

At the site of Tel Halif in southern Israel (possibly biblical Rimmon: Joshua 15:32; 19:7), Frank carefully studied ancient Israelite pottery related to food processing and storage. The site was suddenly and violently destroyed by the Assyrians in 701 B.C.E. In the face of the city’s imminent demise, many of the inhabitants fled, abandoning their houses and, for archaeologists, leaving behind a snapshot of daily household use and organization. This included food containers, which were left in their “normal” positions, allowing Frank to effectively study an ancient pantry. According to Frank, “Storage jars were found beside other artifacts, such as an oven and a grinding installation, but also put together in little groups. The location of storage jars and other items was not random; there was purpose in how the household was organized.” 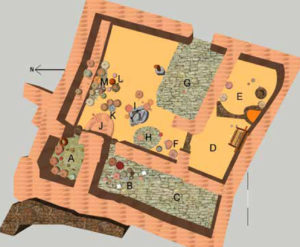 Through digital modeling, Frank and the Halif team were able to show how and where food was stored in ancient Judah, as revealed by recent excavations. The image above shows a typical Iron Age dwelling at Tel Halif; the letters indicate different areas of domestic activity. Food preparation—grinding grain, cooking, chopping, etc.—was conducted in Areas H, I, J, and K. Domestic work, such as weaving, would have been done in Areas D and E. Areas B and C served as a living space. Area M would have been used for agricultural production, while the cobbled floor in Area G likely served as a stable.

In addition to archaeology, ethnography—the study of living peoples and their cultures—also plays a major role in the study of ancient household organization. By comparing the lives and practices of living or historically documented peoples with the archaeological remains of ancient societies who lived in comparable settings, archaeologists can gain insight into how households were organized or how certain objects were used. For example, how pre-industrial farmers organized and stored their food can give valuable insights into how a household in ancient Judah may have functioned or how Israelite pottery was used. Of course, ethnographic comparisons can only explain so much, as societies and their historical contexts are constantly changing. But ethnographic studies, when combined with archaeology and textual studies, can help form a picture of ancient daily life.

To learn more about food storage in ancient Israel and Judah, read “Storage and Staples in Biblical Israel” by Tim Frank, published in the Spring 2022 issue of Biblical Archaeology Review.

———-Subscribers: Read the full piece, “Storage and Staples in Biblical Israel” by Tim Frank, published in the Spring 2022 issue of Biblical Archaeology Review.
Not a BAS Library or All-Access Member yet? Join today.

Was Biblical Israel an Egalitarian Society?

What’s For Dinner? The Answer Is In the Pot