Eunuchs in the Bible

What is a eunuch in the Bible?

Stephen J. Patterson discusses what Jesus meant when he referred to “eunuchs who have made themselves eunuchs for the sake of the kingdom of heaven.”

Should the above words of Jesus from the Gospel of Matthew be taken literally? Is he saying that men—who can—should emasculate themselves?

The initial question that prompted this controversial teaching about eunuchs in the Bible actually concerned marriage.
When asked about marriage and divorce in the Gospel of Matthew, Jesus informs his crowd that anyone who divorces—other than for reasons of unchastity—and marries another, commits adultery (Matthew 19:9).

Upon hearing this, his disciples respond, “If such is the case of a man with his wife, it is better not to marry” (Matthew 19:10). Jesus then says there are indeed some who are called to be eunuchs “for the sake of the kingdom of heaven.”

What is a “eunuch” in the Bible passage? Is Jesus talking literally about castration—or just metaphorically about celibacy? Stephen J. Patterson, the George H. Atkinson Chair of Religious and Ethical Studies at Willamette University, addresses this question about eunuchs in the Bible in his Biblical Views column “Punch Thy Neighbor” in the May/June 2015 issue of Biblical Archaeology Review. He believes that the passage should be taken literally—that Jesus is talking about castration:

Scholars squeamish at the thought of Christian castrati have sometimes insisted that this passage must be referring metaphorically to celibacy. But that is nonsense. If Matthew’s author had meant to speak of celibates (parthenoi), he knew perfectly well how to do that. In a religious context, eunuch had to mean eunuch, else he would simply have confused his audience. In the Book of Matthew, Jesus advises men (who can) to emasculate themselves!

This interpretation is as controversial and countercultural today as it would have been in the days of Jesus—a time saturated with masculine dominance and power. In the Roman world of “phallo-dominance,” castration would have set anyone apart. Stephen J. Patterson explains that Matthew’s eunuchs “remov[ed] the thing that ancients most associated with male power and dominance. This is how they chose to embody the kingdom of heaven on earth.” 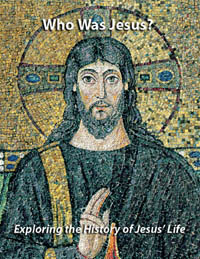 Yet not everyone agrees with Stephen J. Patterson on this issue. Birger A. Pearson thinks that this passage about eunuchs in the Bible should be taken metaphorically. He makes the case that Jesus is speaking in hyperbole in his BAR article “Did Jesus Marry?”:

While some people in the early Church took Jesus’ saying literally, we should understand it as a case of deliberate hyperbole, such as is found in other of his injunctions (see, for example, Matthew 5:27–30 on adultery: “… If your right eye causes you to sin, pluck it out and throw it away; it is better that you lose one of your members than that your whole body be thrown into hell.”) The point Jesus is making about the eunuch is that it is possible for a man to live on earth as he would in God’s kingdom, where there is neither marriage nor procreation. Jesus is challenging people who are “able to receive it” to live a life of celibacy for the sake of the kingdom, and thus to live now as though the future kingdom had already come.

While there will likely always be debate about this passage, both sides can agree that Jesus’ teaching ran contrary to the majority’s opinion about power and dominance in the Roman Empire. For more information about eunuchs in the Bible—and a literal interpretation of Matthew 19:11–12—read the full Biblical Views column “Punch Thy Neighbor” by Stephen J. Patterson in the May/June 2015 issue of BAR.

Read more articles about eunuchs in the Bible in the BAS Library:

This Bible History Daily feature was originally published on May 4, 2015.