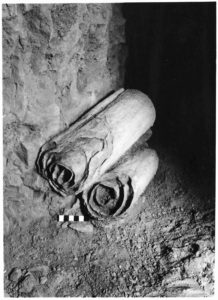 The Copper Scroll. Found in a cave near the Dead Sea, the Copper Scroll describes a vast treasure—hidden in locations throughout the Judean wilderness. Some think the scroll served as a map to the treasure from the Jerusalem Temple. Photo: Courtesy École Biblique et Archéologique Française de Jérusalem.

In 1952, archaeologists found the Copper Scroll in a cave at the site of Qumran near the Dead Sea. Made of copper, the scroll stood apart from the rest of the Dead Sea Scrolls, which were composed of parchment or papyrus. Once unrolled and deciphered, the Copper Scroll was confirmed as being further unique: It describes a vast treasure—hidden in locations throughout the Judean wilderness. Immediately people began to wonder whether the Copper Scroll might be a map to treasure from the Jerusalem Temple.

Joan E. Taylor of King’s College London analyzes this enigmatic document in her article “Secrets of the Copper Scroll” published in the July/August/September/October 2019 issue of Biblical Archaeology Review. Since its discovery, the date of the Copper Scroll has been debated. Through studying the scroll’s contents and archaeological context, Taylor offers an answer to when the scroll was most likely written and hidden.

Inscribed on durable material and hidden in a secure location, the Copper Scroll—serving as a sort of treasure map—was meant to survive. Burying a massive treasure, recording the burial locations on a virtually indestructible scroll, and then hiding that scroll show that someone anticipated that the treasure and treasure map would be seized. Moreover, someone went to great lengths to try to prevent that from happening.

Taylor explains why the magnitude and contents of the Copper Scroll treasure suggest it belonged to a temple:

The treasure is vast, far beyond what we could imagine would be the property of an individual or even a group, unless they were the rulers of a nation. … If we look at the Copper Scroll closely in terms of its contents, this treasure seems to come from a temple—perhaps the Temple in Jerusalem—and was secreted away in 64 (or perhaps 61) locations, most of which are close to Jericho. The enormous size of the treasure, as well as the presence of cultic terminology (e.g., references to tithes, priestly vestments) included in the text, indicates the treasure’s sacred origin.

Although the religious terminology in the Copper Scroll indicates it came from a temple, the text does not specify which temple. However, the language of the Copper Scroll, Mishnaic Hebrew with some Greek loanwords, connects the scroll to a Jewish context. Coupled with the proximity of the various hiding locations to Jerusalem, the Jerusalem Temple seems a likely point of origin. 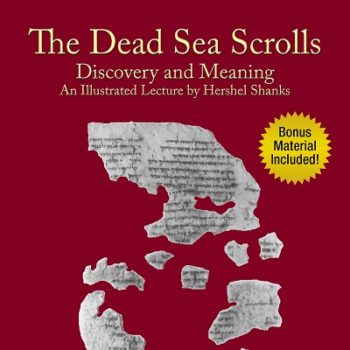 If the Copper Scroll does indeed detail treasure from the Jerusalem Temple, when was it written and hidden? Many scholars think it dates to the First Jewish Revolt against Rome in the first century C.E. (c. 66–70 C.E.) and place it right before the Romans destroyed the Jerusalem Temple in 70 C.E. However, Taylor thinks it better fits the period of the Second Jewish Revolt against Rome (aka, the Bar-Kokhba Revolt) in the second century (c. 132–135 C.E.).

Toward the end of the Bar-Kokhba Revolt, Jewish refugees fled to the Judean wilderness and hid in caves—trying to escape the Romans’ wrath. Archaeologists have found evidence that they took shelter at Qumran and caves near the one that held the Copper Scroll, thereby giving them an opportunity to hide the Copper Scroll. Even though there was no standing temple in Jerusalem during this period, Taylor explains this does not preclude the existence of Temple treasure:

It is not necessary to have a functioning temple in Jerusalem for there to be Temple treasure, because some form of cult could continue without a building. If your synagogue or church is destroyed, it doesn’t mean you give up on worship and religious practice. As [scroll scholar Manfred] Lehmann argued, this treasure may never have been in Jerusalem, but rather stored up in various safe localities over time. Josephus describes everything to do with the Temple cult and Jewish law as still functioning through the end of the first century C.E., even though the Temple was destroyed in 70 C.E. While always referring in the past tense to the Temple as a building, Josephus refers to the continuation of sacrifices in the present (e.g., Against Apion  2.193–198).

The treasure described in the Copper Scroll may very well refer to Temple paraphernalia amassed between the two Jewish revolts and hidden at the end of the Bar-Kokhba Revolt. However, since no piece of this treasure has ever been found, we cannot know this definitively. It is possible the treasure was never actually buried. Some event—likely whatever prompted the creation of the scroll—may have prevented its concealment.

Learn more about the Copper Scroll and the Bar-Kokhba Revolt in Joan E. Taylor’s article “Secrets of the Copper Scroll” published in the July/August/September/October 2019 issue of Biblical Archaeology Review.

A version of this post first appeared in Bible History Daily in September, 2019

Inscription Reveals Governor of Judea Before the Bar-Kokhba Revolt

Dead Sea Scrolls History: Looking Back on the Last 75 Years

Subscribers: Read the full article “Secrets of the Copper Scroll” by Joan E. Taylor in the July/August/September/October 2019 issue of  Biblical Archaeology Review.