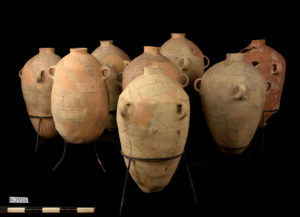 Study reveals that Jerusalem’s kings added vanilla to their wine

It might seem strange, but in the days of the biblical kings, wine flavored with vanilla was a hit. We are not just talking about vanilla overtones, though. According to a recent study by the Israel Antiquities Authority (IAA) and Tel Aviv University, the kings and royals of biblical Judah directly infused their wine with this luxury spice. The study demonstrates the wealth and power of Judah and its biblical kings in the days right before the Babylonian destruction of Jerusalem in 586 B.C.E.

For thousands of years, wine was a luxury item in the ancient Near East. This was no different during the time of the biblical kings. The use of vanilla, however, is very unexpected and speaks to the wealth and extensive long-distance trade networks of ancient Judah. As vanilla was not grown in the Levant or the wider ancient Near East, it may have arrived from India or tropical Africa, likely via the long-distance trade routes that passed through the Negev, Arabia, and beyond. The archaeological context of the discovery (discussed below) shows that vanilla-infused wine was widely consumed by Jerusalem’s wealthy during the reign of King Zedekiah, the last king to rule over Jerusalem before the Babylonian destruction.

While finding traces of vanilla used in late Iron Age Jerusalem is a remarkable discovery, it is not the first time that such exotic spices have been found in the lands of the Bible. As Yuval Gadot of Tel Aviv University told Haaretz, vanilla was previously identified in burials from the major Canaanite city of Megiddo, while evidence of cinnamon was uncovered at the Phoenician site of Tel Dor. 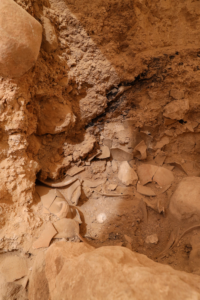 The evidence of vanilla-infused wine was discovered in two separate excavations within the City of David. In both cases, excavators had uncovered numerous large wine jars within buildings destroyed by the Babylonians in 586 B.C.E. One of the excavated buildings was an impressive two-story structure, which may have served as a bureau for senior royal officials. The team discovered 15 large storage jars in a room that may have served as a wine cellar. Several of the jars bore rosette seal impressions, indicating that they belonged to the biblical kings of Judah. The number and quality of the jars indicate both the economic and social importance of wine in ancient Judah.

Although it was assumed that the jars had held wine or oil, the team decided to carry out chemical tests on eight of the jars. The tests identified the molecular remnants of various liquids and ingredients that had been preserved on the interiors of the vessels. As expected, the tests showed that the jars had indeed been used to store wine. What surprised the researchers, however, were organic residues that indicated the wine had been infused with vanilla. According to Ayala Amir, a doctoral student at Tel Aviv University who carried out the tests, “Vanilla markers are an unusual find, especially in light of the fire that occurred in the buildings where the jars were found. The results of the analysis of the organic residues allow me to say with confidence that the jars contained wine and that it was seasoned with vanilla.” Furthermore, several of the jars showed evidence of having been reused multiple times, whether to store wine or other liquids, including olive oil. These findings indicate the complexity of ancient Judah’s economy and the biblical kings’ sophisticated system for the collection and redistribution of goods.

A jar handle with a rosette impression, a seal commonly associated with goods owned or supplied by the kings of Judah. Courtesy Eliyahu Yanai, City of David.

How Bad Was the Babylonian Exile?

The City of David After Five Years of Digging

Searching for Cana: Where Jesus Turned Water into Wine