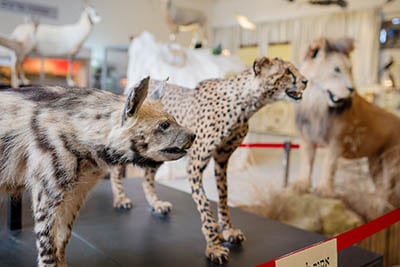 Lions and crocodiles and monkeys, oh my!

If you were asked to name a book that mentions lions, cheetahs, crocodiles, hippos and hyenas, your thoughts might turn to Tarzan or some other such exotic tale. Bears, jackals, monkeys and panthers are the domain of The Jungle Book. Yet all these animals are also found in the Bible.

There are around a hundred different types of mammals, birds, reptiles, amphibians, fishes and invertebrates mentioned in the Bible. It’s difficult to give a precise number because there are several words that may be synonyms for the same creature, or with which it is not entirely clear if they are even referring to animals.

Pictured in the foreground are a striped hyena and a cheetah on display at the Biblical Museum of Natural History in Beit Shemesh, Israel. An oryx and lion can be seen in the background. Photo: Courtesy Natan Slifkin.

Since the setting of the Bible is the Promised Land and its environs, the animals described in the Bible are those that were native to that region. Thus, there is no mention of pandas, penguins or polar bears in the Bible. There are some exceptions, however; monkeys and peacocks from India appear in the Bible. The reason for this is that they were shipped in to adorn King Solomon’s palace (1 Kings 10:22). There is also a possible reference to the giraffe (Deuteronomy 14:5), which was likewise sometimes exported from Africa and shipped internationally as gifts. Aside from such exceptions, the animals of the Bible are those from the region of Israel.

One cannot read a modern book on the fauna of Israel, however, to gain an understanding of Biblical wildlife. There are several species that live in the modern State of Israel that are non-native species and did not live there in Biblical times; they thus do not appear in the Bible. Mynah birds, nutria (beaver-like rodents) and the ubiquitous brown rat are plentiful in Israel today, but they did not live there during Biblical times. 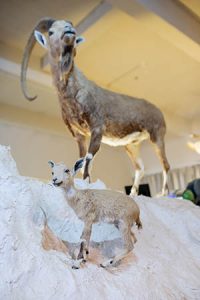 A juvenile and adult ibex at the Biblical Museum of Natural History. Photo: Courtesy Natan Slifkin.

Conversely, there are many other species mentioned in the Bible that lived in Biblical lands but subsequently have disappeared from the area. These include hippopotami (Job 40:15–25), crocodiles (Ezekiel 29:3–6), hartebeest (Deuteronomy 14:4), cheetahs (Habakkuk 1:8), bears (2 Kings 2:24) and lions (mentioned on over 150 occasions!). Some other such animals have been bred in captivity and were subsequently released back into the wild, such as ostriches (Lamentations 4:3), Mesopotamian fallow deer (Genesis 49:21) and the magnificent oryx antelope (Deuteronomy 14:5).

Since particular species are limited to particular regions of the world, historically people who did not live in Biblical lands were not familiar with the animals of the Bible. Consequently, they transposed the names of Biblical animals to their local equivalents. Thus, the zvi of the Bible (Proverbs 6:5) is the gazelle, but in Europe, where there were no gazelles, the name zvi was transferred to the deer. The shu’al, a species of which Samson captured 300 and tied fire-brands to their tails (Judges 15:4), was identified in Europe as a fox, leading Bible critics such as Voltaire to mock the notion that it would be possible to find 300 members of such a solitary loner as the fox. However, as other verses indicate, the shu’al of Scripture is actually the jackal (see Psalm 63:11), a relative of the fox that gathers in large packs. Yet because there are no jackals in Europe, people there had long transposed the name shu’al to the fox. 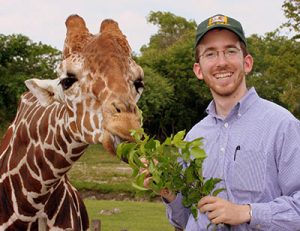 At the Biblical Museum of Natural History in Israel, the complex zoogeography of the Bible is fascinatingly reflected in the reactions of the visitors to the animals on exhibit. American visitors are familiar with bears and wolves, but they tend to confuse the crocodile with the alligator. European visitors are familiar with the fallow deer but are often mystified by the mongoose. South African visitors are very familiar with many of the animals on exhibit, including the hyrax (the Biblical “coney” or “rock badger” of Psalm 104:18, an animal that bewilders people from Europe and America, but which is well known to those who have been to Cape Town), but they have never seen bears or wolves. And while everyone is familiar with the lion, cheetah and hippopotamus, it comes as a shock to realize that these creatures used to roam wild in the Promised Land—at a time when the country was much more densely covered in forests and swamps. Perhaps the Bible can indeed be referred to as The Jungle Book.

Rabbi Dr. Natan Slifkin is the Director of the Biblical Museum of Natural History in Beit Shemesh, Israel (www.biblicalnaturalhistory.org). He is also the author of numerous books on religion and the natural sciences, including The Torah Encyclopedia of the Animal Kingdom (2015).

The Animals Went in Two by Two, According to Babylonian Ark Tablet

The Enduring Symbolism of Doves

Did Camels Exist in Biblical Times?

What Does the New Testament Say About Dogs?

No, No, Bad Dog: Dogs in the Hebrew Bible

Between Heaven and Earth: Birds in Ancient Egypt

This Bible History Daily feature was originally published on December 13, 2016.