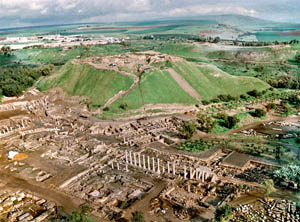 The imposing tell of Beth Shean. In the Bible the city plays an important role following the death of King Saul and as a major Israelite administrative center. Excavations over the past century have revealed what archaeology (and the Bible) can—and can’t—tell us about the site’s history. Photo: Gaby Laron, The Hebrew University of Jerusalem.

The most famous episode featuring Beth Shean in the Bible follows the death of King Saul on Mt. Gilboa:

The Philistines came to strip the slain, and they found Saul and his three sons lying on Mt. Gilboa. They cut off his head and stripped him of his armor … They placed his armor in the temple of Ashtaroth, and they impaled his body on the wall of Beth Shean. When the men of Jabesh-Gilead heard about it—what the Philistines had done to Saul—all their stalwart men set out and marched all night. They removed the bodies of Saul and his sons from the wall of Beth Shean and came to Jabesh and burned them there. Then they took the bones and buried them under the tamarisk tree in Jabesh, and they fasted for seven days (1 Samuel 31:8–13; cf. 1 Chronicles 10:8–12).

Archaeology seeks to uncover an even broader picture of a site’s past. In the Bible, Beth Shean is a major administrative center in Solomon’s kingdom, but excavations show that the site was an important one long before (and after) the kings of Israel reigned over it. Even so, can archaeology and the Bible corroborate the same historical event? 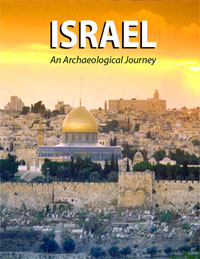 Multiple excavations at Beth Shean in the past century have revealed a 6,000-year history of settlement at the site. Located near the intersection of two well-traveled ancient routes, Beth Shean proved to have important strategic value as early as the fifth millennium B.C.E., when it was first settled. Civilizations rose and fell at the site throughout the Chalcolithic period and Bronze Age. Some of the most impressive finds at Beth Shean came from the Late Bronze Age, when Egyptian pharaohs ruled over much of Canaan and used Beth Shean as a crucial administrative center to rule over its vassal kingdoms.

Unfortunately, due in part to later Roman and Byzantine construction at the base of the mound, excavators have not yet revealed any portion of the Beth Shean city wall from the 11th century B.C.E., when the Biblical story about King Saul’s death most likely occurred. And although the city was certainly occupied at this time, there is no evidence of a Philistine presence at the site then. So archaeology has not confirmed the Bible’s stories, but it has shed light on an even richer past at Beth Shean.

For more about the death of King Saul and the aftermath at Beth Shean in the Bible, as well as the extent to which archaeology and the Bible agree about Beth Shean’s past, read “Was King Saul Impaled on the Wall of Beth Shean?” by Amihai Mazar in Biblical Archaeology Review, March/April 2012.

BAS Library Members: Read “Was King Saul Impaled on the Wall of Beth Shean?” by Amihai Mazar as it appeared in the March/April 2012 issue of Biblical Archaeology Review.

This Bible History Daily feature was originally published on February 23, 2012.