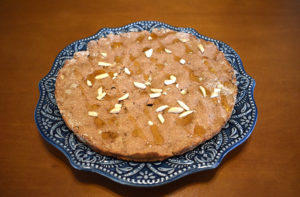 A sweet Roman treat for February

February, of course, is the month we celebrate Valentine’s Day. Though a holiday associated by many with romance, in the modern world we often forget its origins—a celebration of St. Valentine (although which St. Valentine is debated, since more than a few martyrs bore that name). Similarly, love isn’t all about romance, either. Love takes so many forms—romantic love to be sure, but also familial love, friendly love, and self-love, to name a few. So before this month is out, settle in with Biblical Archaeology Review to create something delicious to share with those you love, or just treat yourself! 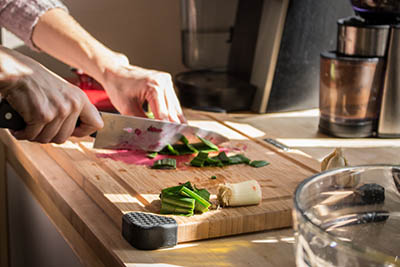 In keeping with the sweet season, this BAR Test Kitchen returns to our good friend Apicius, the first-century Roman gourmet whose De Re Coquinaria (On the Subject of Cooking) features a recipe for  “Peppered” or Cinnamon Sweet Cakes. While this recipe pre-dates the celebration of Valentine’s Day as a romantic holiday (which began in the 14th century), some believe the holiday has its origins in the Roman festival of Lupercalia, held in mid-February. Lupercalia was a festival that celebrated fertility and included the pairing off of women with men selected by lottery.

The use of the word pepper here is also a bit of a misnomer. In the first century C.E., Romans believed that cinnamon, nutmeg, and black pepper had a common point of origin, thus they tended to use the word “pepper” to cover all three spices.

For sweet cakes, Apicius’s recipe is:

For BAR’s version, we made a few changes. Rue—an herb that is also known as herb-of-grace and traditionally used for medicinal purposes—was replaced with rosemary. This was for two reasons. First, rue can be challenging to find in some places. Second, if you are not accustomed to rue, it can cause stomach issues, so we played it safe.

We also replaced the raisin wine with muscatel, a wine made from muscat grapes that would have been known to the Romans. Raisin wine can be very challenging to find in the U.S., as my local wine store explained (the owner actually said “I haven’t ordered fruit wine in almost 20 years.”).

To give this cake some body, BAR added whole wheat flour, which Apicius does use in other sweet (dulcia) recipes. 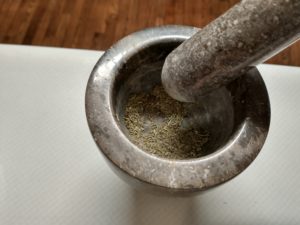 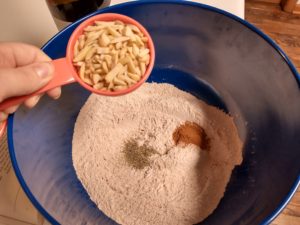 In a measuring cup, combine wine with grape juice and honey. Add milk to make 1 cup of liquid. 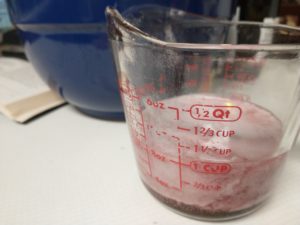 Mix liquid with dry ingredients until combined. The dough will be more like a bread dough or cookie dough. 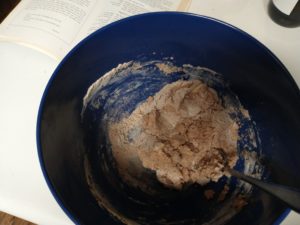 Pour into 9-inch round pan (I greased pan with butter, which worked well) and bake in a 375° oven for 30 minutes. 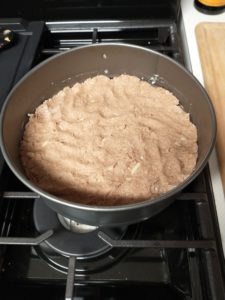 Once cake is out of the oven, prick surface with a fork and drizzle with honey and decorate with almonds. This cake is best enjoyed with coffee or tea, as it’s a little dry.