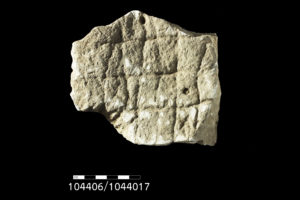 Evidence of ancient board games in the biblical world dates back millennia. While in some regions these games took on religious significance, they were no less a part of daily life in the southern Levant. According to a new study, published in the journal Palestine Exploration Quarterly, excavations at Tell es-Safi (biblical Gath) in southern Israel have revealed numerous game boards and gaming pieces that were used in domestic contexts. Although board games seem rather mundane, their presence tells us a lot about daily life in the ancient world.

Board Games and Daily Life

During the excavation of the Early Bronze Age III (2900–2500 B.C.E.) layers at Tell es-Safi, archaeologists uncovered four fragmentary game boards and numerous game and casting pieces. While all the game boards featured the Canaanite game known as 30 Houses, one board also included the game Senet on its reverse. Senet was well known in ancient Egypt, where it was frequently played in cultic contexts. In the southern Levant, however, including at Tell es-Safi, ancient board games are predominantly uncovered in domestic or public contexts. These discoveries shed light on daily life in ancient Canaan, demonstrating the importance of gaming within private and social life in the region nearly 5,000 years ago. 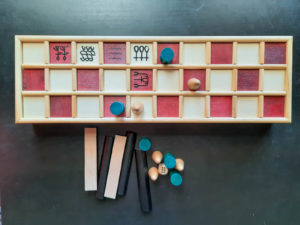 While Egyptian board games were typically ornately constructed and decorated, the Canaanite versions were made from more mundane materials. All of the boards discovered at Tell es-Safi were constructed of local soft chalk, while the playing pieces were made of lightly worked pebbles and small bones. The most common bones used were those of sheep, goats, and other ruminants, specifically small ankle bones known as astragali. The team was able to identify these as game and casting pieces (rudimentary dice) based on their specific wear pattern and indications of intentional flattening on some of the pieces’ edges. Such patterns would have resulted from being routinely handled and rolled.

The use of these readily available materials demonstrates that these games were crafted locally and likely played by all levels of society. The find of one board that included both Senet and 30 Houses may indicate that these two games had varying levels of difficulty, with one played by children and the other by adults. While similar double-sided board games are known from later periods in Egypt and the Levant, this is the only example from the Early Bronze Age that has been discovered. 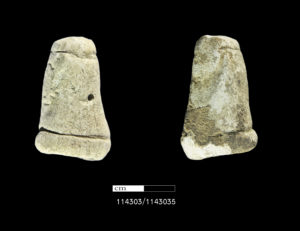 The History of Ancient Board Games

Several ancient board games are known from the Near East, with the most famous being the Egyptian game Senet and the Mesopotamian Royal Game of Ur. Both of these gaming traditions were apparently carried to the Levant through trade, migration, and even conflict. These games were then modified in Canaan, leading to the development of the game 30 Houses from Senet and 20 Houses from the Royal Game of Ur. Senet likely reached the Levant during the Early Bronze Age, a time of extensive Egyptian influence in Canaan. Boards for the game 30 Houses have been found throughout the Levant during the Bronze and Iron Ages (fourth–first millennia B.C.E.). Similarly, 20 Houses made its way from the Levant to Egypt during the Late Bronze Age (1550–1200 B.C.E.), a period when Egypt and Canaan were in regular contact. 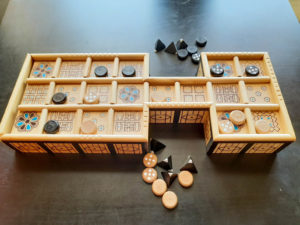 A modern recreation of the Mesopotamian Royal Game of Ur. Courtesy Lavinia Nalty.

Board Games Were Status Symbols in the Ancient World

Roman Game Board Found in Turkey

The Last Days of Canaanite Azekah