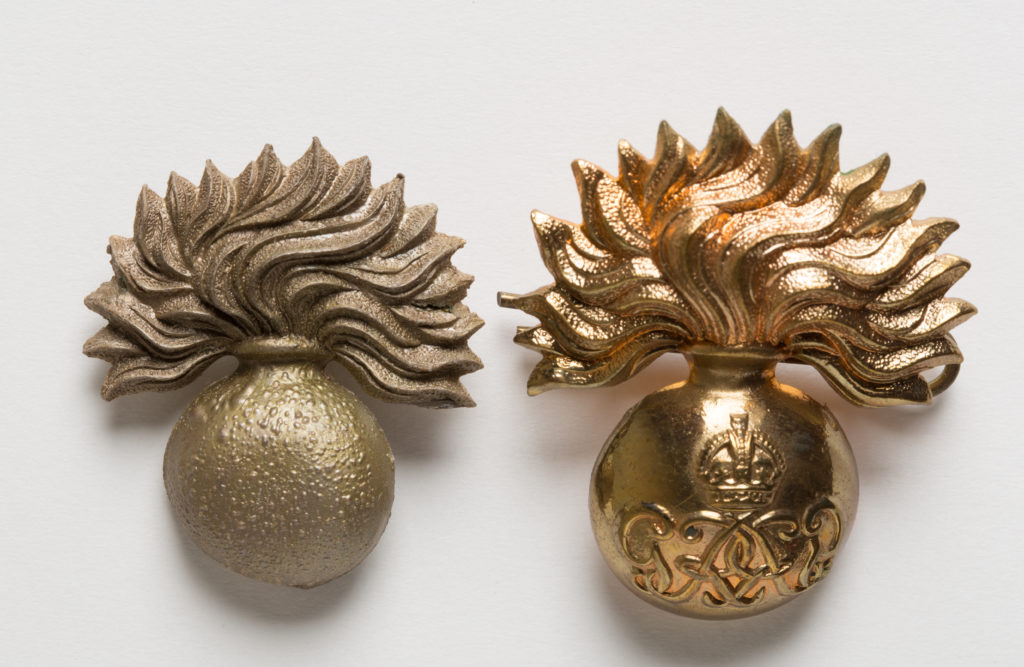 The cap badge is a special part of British Army headdress that took shape in the late 1800s and continues to be worn today. Each regiment of the British Army has a rich historical lineage filled with accomplishments and traditions reflected by these unique badges.

Cap badges have a long and complex history. The concept behind their creation dates back to the Middle Ages, when noblemen used various heraldic insignia, colors and symbols to identify themselves and rally troops under their command on chaotic medieval battlefields. In 1645, Oliver Cromwell’s New Model Army introduced red coats and silver uniform badges to Parliamentarian soldiers which created newfound unity among previously diverse local troops. In years following, regiments were privately raised and funded by colonels, who designed their own insignia. In 1751, King George II issued a Royal Warrant in an attempt to bring regimental symbols under royal control; however, this effort was not entirely successful. In 1806, regimental devices began to be regulated by an Inspector of Regimental Colours, an office controlled since then by the heraldic College of Arms. The ultimate approval of designs, mottoes and crests worn in the army has since rested under the authority of the British monarchy.

Despite being overseen by royal authority, regiments were allowed to retain their individuality. Indeed, the British Army has shown an exceptional ability to preserve what might be called the “birthright” of individual regiments despite amalgamations and changes made over time.

Every cap badge is intended to embody the essence of its regiment. The anatomy of a cap badge can include:

So how did regimental insignia come to be worn on caps? During the 1800s, the British Army underwent a military fashion crisis that pitted style against practicality. Average soldiers endured a changing series of conspicuous headpieces including shakos, spiked cloth helmets modeled after the uninviting German Pickelhaube and even an infamous, mushroom-shaped forage cap known as the Brodrick. The Brodrick was universally despised by wearers due to its unflattering appearance—so much so that a 1906 news report claimed that one British soldier committed suicide due to his humiliation at having to wear it. During this period of wardrobe upheaval, the army realized it was possible to display regimental crests on helmet plates. This was done and eventually crests came to be displayed on caps.

The first cap badges were worn by British soldiers in 1897 and conformed to a general style in 1898. The advent of khaki service dress brought with it a variety of peaked khaki caps, which tended to be more practical, comfortable and pleasing to the eye. At last, the army had developed a viable solution to the hat crisis—and had also found a way to place an identifying regimental mark on soldiers’ headgear. This evolution resulted in the standard modern British Army cap badge.

During World Wars I and II, the majority of cap badges were made from copper-alloy metal, with many “bimetal” versions also made from brass and white metal. Due to metal shortages during World War II, the British resorted to producing cap badges from plastic. These are known as plastic economy badges.

Cap badges became a source of pride for soldiers. With elegant designs echoing medieval heraldry, the badges provide a visible connection to a soldier’s unique regiment, with all its glory, quirks, and traditions. The badge bridges the soldier’s own service with the heroism of predecessors in past wars. Regimental insignia on the cap badge has provided soldiers with a sense of belonging to a distinctive, yet shared, British tradition. Cap badge designs have also often been reproduced as “sweetheart badges” to be worn by loved ones.

During World War II, Bernard Law Montgomery—the first British general to wear battledress—became famous for wearing the regimental cap badges of soldiers under his command as a way of identifying with his troops and showing pride in their achievements. Montgomery’s unorthodox manner of wearing cap badges did not conform to army dress regulations and was disapproved of by military officials, but he won his cap badge battle.

Montgomery’s example bears witness to the fact that cap badges are versatile and can be worn on not only on peaked caps, but a variety of other military headdress including berets and slouch hats. Cap badges are also worn on turbans by Sikh service members.

A distinctive sight during both world wars, cap badges continue to be worn by soldiers in the United Kingdom and Commonwealth nations today.