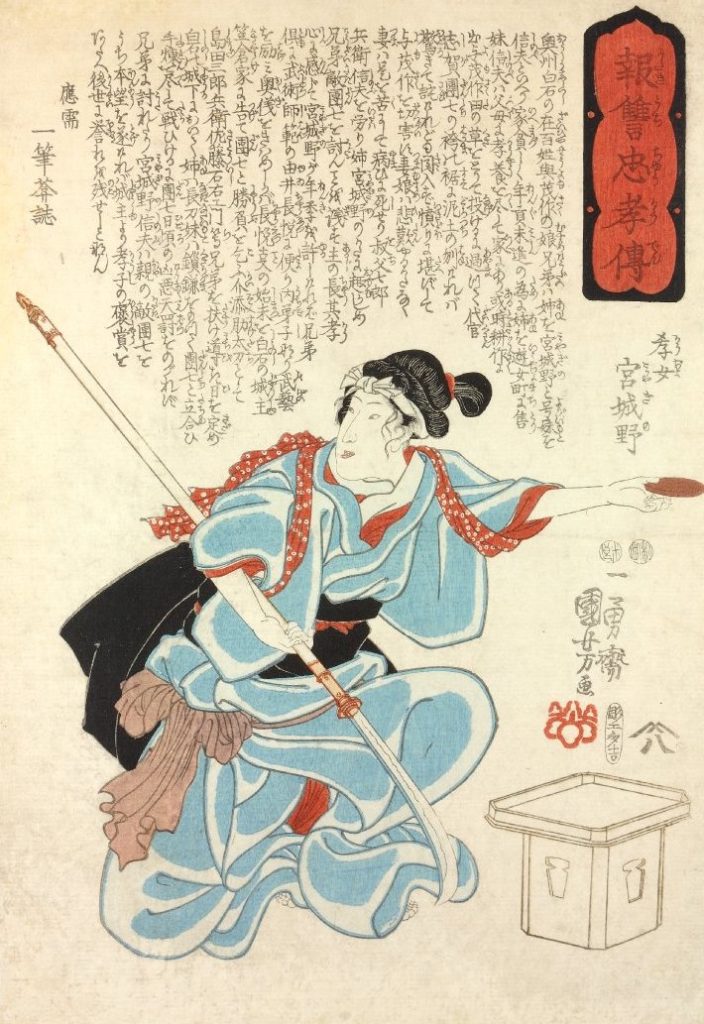 The naginata is a curved sword mounted on a pole. It is recorded as having been used by warrior priests circa 750 A.D. It first rose to prevalence during the Kamakura period from 1192 to 1333, a feudal era that might well be considered a Renaissance period for Japan’s warrior class. The naginata had several tactical advantages which made it popular on the battlefield. As a polearm, it lent warriors a much longer reach. Its single-edged blade was narrow but heavy, which allowed wielders to manipulate gravity to launch hard and deadly strikes. It proved ideal for fighting on horseback. It also proved its worth masterfully against famed katana blades—a skilled practitioner of naginatajutsu, or the art of naginata wielding, could effectively dispatch multiple samurai swordsmen with a few well-placed sweeps of the arm.

This deadly polearm was not designed specifically for women. Why then did it become known over time as a “woman’s weapon”? The naginata proved its worth as an ideal weapon for female self-defense during the Warring States period, also known as the Sengoku Jidai, according to an article published by Ellis Amdur in the Journal of Asian Martial Arts entitled, “The Role of Arms-Bearing Women in Japanese History.”

During a time when raiding and pillaging were common, noblewomen were often left in charge of guarding their households while men were away at war. The naginata—with its long reach and powerful blade that could so easily be spun into motion—enabled women to defend themselves at close quarters. According to Amdur: “A strong, lithe woman armed with a naginata could keep all but the best warriors at a distance, where all the advantages of strength, weight or sword counted for less.”

Due to its length and weight, the naginata did not require any excessive lunging, leaping or weight shifting to use effectively. A well-balanced weapon, it could be used to great effect with minimal and understated movements. It could thus be spun with deadly efficiency by a woman wearing a restrictive kimono. This made it a powerful but easy weapon for a woman at home to grab in self-defense—perhaps like a medieval melee equivalent of a shotgun.

Several stories passed into legend of the wives of Japanese noblemen wielding the naginata to fend off intruders. In one famous instance, an aristocratic woman, married to a certain Mimura Kotoku, is said to have drawn her naginata against an enemy general invading her husband’s castle. Although the intruder refused to duel with her and pejoratively called her a “demon” for her ferocity, she allegedly killed his bodyguards and forced him to withdraw. Women bearing the naginata were idealized on woodblock prints. While the traditional role of women in feudal Japanese society largely barred them from becoming full-fledged warriors, female fighters using the naginata were perceived to be acting with duty and loyalty in defense of their homes and honor.

Thus, over time, the naginata came to symbolize female virtue in Japan. It was displayed in samurai homes and was even given to brides as wedding presents. Seen as a worthy pursuit for women, naginatajutsu became a popular martial arts form for girls and all-female schools began to flourish.

“What the sword was to a man—a weapon embodying his soul—the halberd-like naginata was to a woman,” wrote Michael Hoffman in The Japan Times.

Arguably the most famous woman to use the naginata in battle was Nakano Takeko, who gathered a troop of female fighters to help defend her domain from imperial troops during the Battle of Aizu in 1868. Takeko’s all-female unit is said to have benefited from the element of surprise, since their enemies hesitated to attack once they realized they were facing women. Boldly leading her group, Takeko became famous for wielding her naginata with deadly precision against an overwhelming force of imperial troops. After killing several soldiers she was mortally wounded by a gunshot. With grim resolve as she lay dying, Takeko asked her sister to behead her so that her head would not be taken by the enemy as a trophy. Her sister complied with her wishes, and her head was taken to a local temple for burial.

Other women present during the siege shared Takeko’s steely spirit. A death poem written by one of the women who defended Aizu castle during the same battle reads: “Each time I die and am reborn into the world I wish to return as a stalwart warrior.” Takeko has been honored as a hero, with a memorial standing at the spot where she fell in battle. A statue of her poised ready to strike with her naginata stands in Fukushima, Japan.

While the naginata was not designed specifically for women, the weapon will forever remain most associated with women throughout history who bravely took advantage of its strong and graceful design.