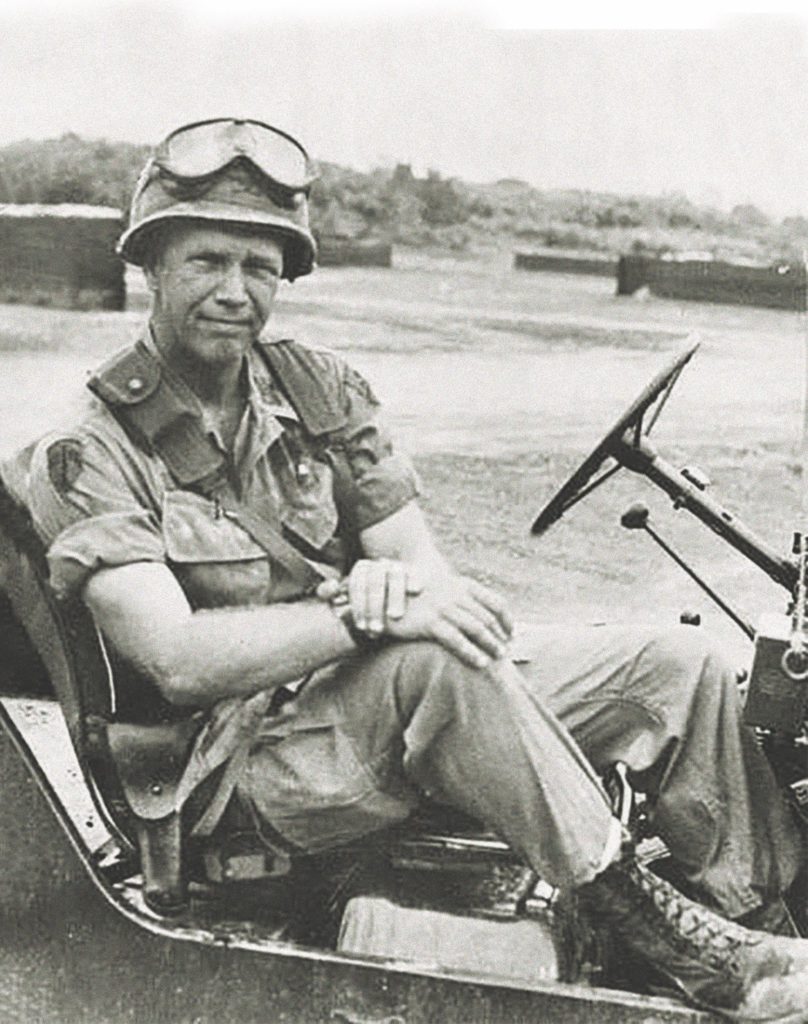 George Smith Patton IV, asked what it was like to grow up in the shadow of a World War II icon, replied in a 1977 interview: “I’ve never worried about it. I’ve been too busy.”

Born in Boston on Dec. 24, 1923, he was the fourth in his family to bear the George Smith Patton name. The first was his great-grandfather, a Confederate colonel killed during the Third Battle of Winchester in Virginia. His grandfather, George Smith Patton Jr., was a lawyer and politician in California. His father, third in the lineage but also a “Jr.,” served in two world wars and earned two Distinguished Service Crosses and two Silver Stars.

George Patton IV was in his last year at West Point when his father died in December 1945 of injuries from an automobile accident in Germany. The son changed his name to drop the Roman numeral. After graduation in 1946, Patton was sent to Germany as an infantry officer and participated in the 1948 Berlin Airlift. In 1952 he became an armor officer. A year later, while in Korea with the 140th Tank Battalion, 40th Infantry Division, Patton received a Silver Star and Purple Heart.

Patton served in Vietnam in 1962-63 and returned for a shorter tour in 1967. A third tour began in January 1968. In April, after being promoted to colonel, he was given command of the 11th Armored Cavalry Regiment.

On Aug. 9, during a search operation with a unit from the Army of the Republic of Vietnam, the ARVN troops were struck by enemy forces fighting from tunnels under the village of Chanh Luu, north of Saigon. Patton instructed his senior staff to cover him while he took a smoke grenade (he couldn’t find a fragmentation grenade) and advanced toward the enemy. Exposing himself to heavy fire, he threw the smoke grenade into a tunnel opening. Patton’s actions resulted in 16 enemy killed, the capture of 99 suspected Viet Cong and a second Silver Star.

On Sept. 5, Patton, in his command helicopter, saw 58 North Vietnamese Army soldiers trying to escape the encirclement his troops had made. While his door gunners fired, Patton ordered his pilot to land. As the helicopter landed, it sustained heavy damage traced to fire from a ravine. Patton directed an assault that forced the NVA to withdraw. He also led a squad in an attack on the ravine. Patton personally captured one soldier and killed two as they tried to flee the ravine. He received the Distinguished Service Cross.

On Sept. 24 Patton and the 11th Armored Cavalry were on an operation near Chanh Luu with ARVN rangers.

When enemy fire from a house slowed the rangers’ momentum, Patton ordered his helicopter to land.

He disembarked and, as the firing continued, moved the rangers into a supporting position near the NVA, while blasting the enemy with a grenade launcher.

Patton then led his men on a charge that demolished the house and exposed a heavily fortified bunker. As his men covered him, Patton crawled across the open terrain and threw a grenade into the entrance. It didn’t do the job. Patton came back with two other men and TNT, which pulverized the bunker. He received another Distinguished Service Cross.

The son matched in two wars the two Distinguished Service Crosses and two Silver Stars awarded to his father in two wars. Before he left Vietnam, Patton’s decorations included a Distinguished Flying Cross and 27 Air Medals.

Patton received his first star in 1970 and his second in 1975. As a major general, he commanded the 2nd Armored Division (1975-77), the same division his father had led. They are the only father and son to command the same Army division.

While in Germany, Patton became friends with Stuttgart’s mayor, Manfred Rommel, also born on Christmas Eve, five years after Patton. Rommel was the son of Field Marshal Erwin Rommel, whose German tanks had gone head-to-head with Patton’s father in North Africa. After Patton retired in 1980, the two remained friends. Patton died from Parkinson’s disease on June 27, 2004. He is buried at Arlington National Cemetery.